A Referendum on Fun in Massachusetts Is Coming. Are We Ready to Party, or Not?

On "happy hours" and fireworks, voters may get the chance to ditch some of the state's most infamous stick-in-the-mud policies. 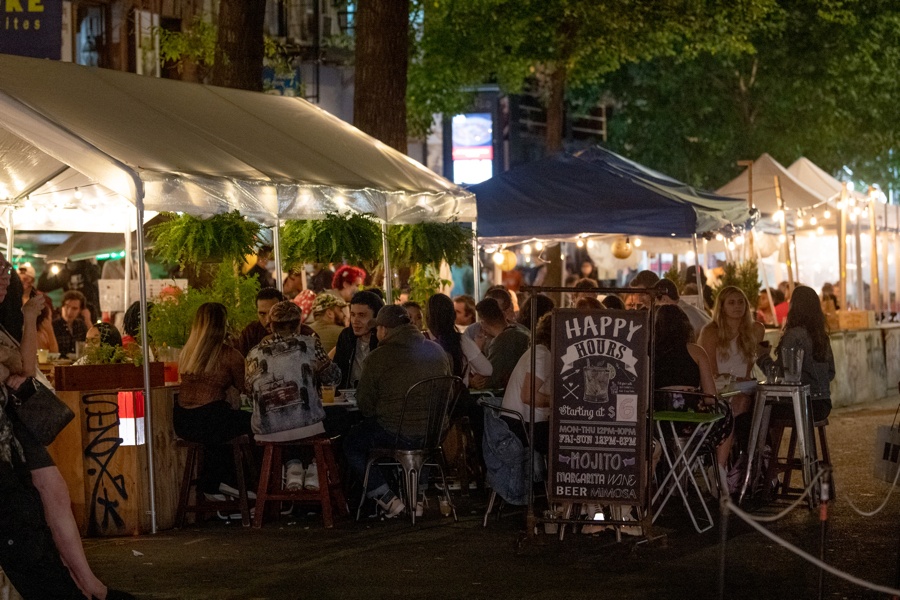 If you think living in Massachusetts means living under the thumb of a fun-crushing nanny state, you may get two opportunities to change things once and for all at the ballot box next year: One proposed 2022 ballot question would repeal the state’s infamous ban on “happy hour.” Another would legalize fireworks.

Could it be? Could the moment Boston finally reclaims after-work drink specials be right around the corner? Could the state’s ban-in-name-only on gunpowder-based entertainment—all the way down to puny sparklers—be obliterated like so many illegal bottle rockets on a summer evening?

It’s not a sure thing that either will make it on the ballot in 2022. Both proposals would need to scale some pretty big hurdles to do so, including gathering about 80,000 signatures from voters. (Although if the “happy hour” bid fails, State Rep. Mike Connolly has filed a bill that would also take on the issue).

But should either or both proposals end up actually making it on the ballot, consider it a referendum on whether it’s time for the Commonwealth and the city to outgrow their buzzkill personas. Sure, we have world-class sports teams, a well-earned reputation as a dining destination, and a rapidly growing club scene. Yet Boston has yet to shake off its reputation for being ideologically against letting its residents fully let loose. Whether it’s the MBTA shutting down at the ungodly early hour of 12:30 a.m., or bars slamming closed at 2, there are systemic impediments to partying around here. And make no mistake, this is a policy failure as much as a cultural one: Ahead of this year’s mayoral election, the Globe recently saw fit to press each of the candidates on how each of them would solve the city’s longstanding shortcomings on fun.

Sure, chugging BOGO beers at Beantown Pub or igniting explosives in your JP backyard might not be everyone’s cup of tea. But if given the choice, do we really want to be a state full of tattletales and assistant principals? Ballot questions would ask us to collectively go on record. Do we choose controlled chaos or rigid order? Dullness, or fun?

Massachusetts was one of the first states to ban happy hour back in 1984, at a time when the crackdown was seen as a way to curb drunk driving. We’re now one of 11 states, including Vermont and Rhode Island, with such a rule. An effort to do away with the ban back in 2011 in the state legislature fizzled. The current ban on buying, owning, or setting off fireworks in Massachusetts puts us in even rarer company, making us one of only four states in the U.S. with such a rule on the books.

There are signs residents are ready to bring happy hour back this time around. A recent MassINC poll found that 70 percent of respondents said they were in favor of lifting “happy hour” restrictions. Times have also changed since the ’80s. Drunk-driving deaths, the rate of which fueled anti-“happy hour” rules way back when, have plummeted. Ride-hailing apps have made it easier than ever to avoid getting behind the wheel if you’ve had too many. That’s why the ballot question’s sponsor, Dorchester attorney Nick Silveira, has said he believes a repeal of the ban is “long overdue.”

The bar and restaurant industry’s struggles over the past two years will also add fuel to the fire, although it’s not yet clear what that means for the ballot question’s fate. People are especially attuned to the plight of restaurants these days, so you could imagine voters opting to let bar owners do whatever they think is in their best interest: If half-off tequila shooters keeps the doors open, then have at it. The flip-side, though, is that many restaurants have vocally pushed back against the return of “happy hour” for years, worried the race to the bottom on drink deals would cut into their bottom line.. At time when restaurants are struggling to survive, perhaps paying them less money for a mixed drink might not help.

When it comes to fireworks, let’s address the phantom in the room: it’s not like making the products illegal has succeeded at keeping Massachusetts fireworks-free. Despite a years-long ban on recreational explosives, the state is a major market for them. Untold tons of gunpowder are trafficked from New Hampshire—out of shops placed suspiciously close to the border, whose parking lots are routinely filled with Massachusetts license plates, and who until recently were peppering Massachusetts homes with ads every year. So how will voters here react to a chance to acknowledge that reality, and perhaps get in on the firework-selling action ourselves?

It may come down less to a quest for fun than an awareness that banning things doesn’t make them go away. Cannabis legalization in 2016, also accomplished via ballot question, offers a hint at how this might go. Voters recognized that pot sales were happening whether we legalized the practice or not, so decided to help the black market go legit (and recognize a huge boost to the local economy in the process).

Still, there was also a social justice argument to be made about undoing all the harm caused by the War on Drugs. It’s much harder to make that case when it comes to big booms in the sky. And the summer of 2020, which saw a dramatic spike in illegal firework usage, may still be fresh in voters’ minds come 2022. Considering the angst and irritation the ceaseless explosions caused around here, will people be as sympathetic to the pyromaniacs’ cause?

Still, my deeply unscientific survey of friends and confidants reveals that Bostonians of a certain age would love to see hours get a little happier around here. Once you’ve experienced half-priced Margarita Mondays and bottomless mimosas in other more fun-loving cities like, say, NYC, it’s hard not to feel like all of us in Boston are getting ripped off. I’m personally less gung-ho about fireworks, but considering how many of you seem to love setting the things off every summer, it’s certainly worth giving voters an opportunity to express that fondness at the ballot box.

Long story short, 2022 could prove a put up or shut up moment for the state. People who’ve been loudly calling for a more laissez-faire attitude on fun in Massachusetts may just get their chance to reshape the state in their image. Is the party just getting started, or is it last call?