Setting Sail on the Charles with Community Boating, Inc. in Its 75th Year

For 75 years, the Boston institution has kept a prime piece of Boston's waterways from becoming a playground for the rich. 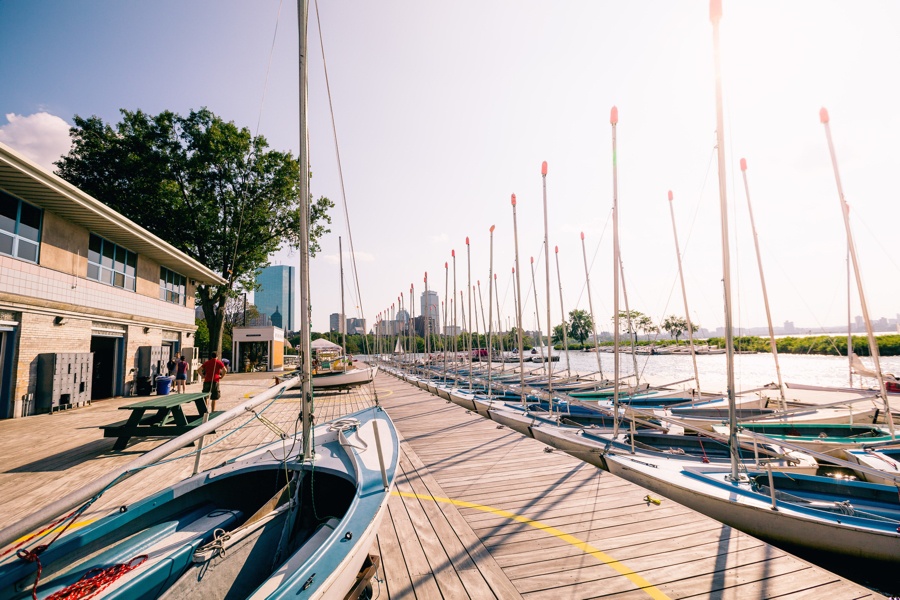 It’s hard not to be charmed by Community Boating, Inc. As of this summer, the scrappy, volunteer-driven nonprofit has officially spent 75 years at the edge of the Charles River making the impossible happen: turning sailing, pastime of wealthy WASPs and Ivy Leaguers on obscure sports scholarships, into something nearly anyone can do.

The club, with its armada of kayaks, paddle boards, and sailboats big and small, is the oldest and largest of its kind in the country. Generations of sailors from every corner of Boston—an estimated half a million in total—have set sail here. And when it declares, as it does in big letters outside its Esplanade boat house, “SAILING HERE FOR ALL,” it means it.  Memberships, and access to its fleet, are the cheapest in the city by a longshot. A third of its youngest members pay nothing at all. Its accessible sailing program, available for a nominal fee that tops out at $50 a year, is complete with specially built boats that paraplegic sailors can use.

After all this time, the nonprofit is still single-mindedly—even radically—pushing to democratize Boston’s waterways, keeping them from becoming a playground for the haves. And to do it all in the shadow of Beacon Hill, with the same covetable views of the Boston skyline enjoyed by the richest of Boston boaters, makes it seem all the more unlikely.

To give me a taste of what they’ve been up to down there since 1946, CBI had offered to let me set sail with them. As someone who never turns down an excuse to be on the water, I had no choice but to accept.

Through the big, welcoming entryway at the base of the footbridge, and down on CBI’s sprawling dock, I met Sam Peirson, the club’s adult program director and my guide for the day. Peirson, who comes to us by way of South Florida, gleefully compared the scene to what you typically find at pricey yacht clubs, settings people are most likely to associate with sailing. Unlike at more exclusive traditional clubs, no one at CBI personally owns these boats, or pays to launch them in the river or for lessons. Instead, after a small membership fee, everything is completely free. Peirson was baffled by this arrangement when he interviewed for his job back in 2018.

“It’s incredibly cheap for the sailing world. At very few places will you get access to all these boats and have lessons included,” he says. “I was like, ‘How do you make money?'”

The answer is, of course, that it’s a nonprofit. And because of that, it’s possible for CBI to give away memberships for as little as $1 to Boston’s neediest families while still managing its accessible boating program, which is fueled by an array of expensive equipment that enables disabled sailors to steer with a joystick—or, for paraplegic boaters, with a straw. Donors and big-name sponsors like EF Education First and Polar keep the program afloat, as does a volunteer culture at the club, which sees hundreds of its members donate their time to teach classes and take on other duties on the dock, keeping costs to a minimum.

Whereas traditional yacht clubs are exclusive by nature, CBI tries to never turn anyone away. Its goal since the ’40s, says communications manager Sidaulia Benson, is to be the most wide-open boat club in Boston.

“Whatever it may be that’s stopping someone from sailing, we want to figure out what that is. Is it economic? Is it physical? We’re here for it,” she says. “There are no limitations at Community Boating for anyone to get out sailing. We want to smash boundaries down.” 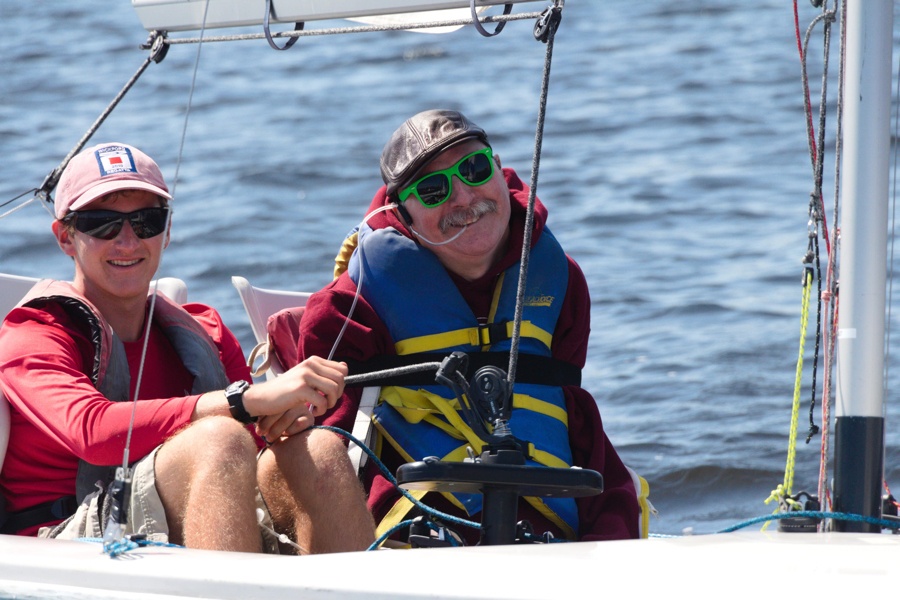 It was time to hit the water, so we climbed aboard a Sonar, a 23-foot-long sailboat I learn is the first choice of members who want to take out inexperienced friends and family (or reporters, evidently) in something gentle. We set out slowly in the exceedingly calm breeze, blowing at what I would estimate was 0 knots.

The CBI team is apologetic about the slowness, but I learn the wind is fickle out here on the Charles. All the buildings along the shore make it unpredictable even by New England weather standards, and boaters are often confronted with still, dead air one minute, then quick-moving gusts the next. That’s in part what makes CBI’s territory, a chunk of the Charles River Basin between the Longfellow and Harvard bridges that Peirson describes as a “pond,” so valuable as a training ground for new sailors. Plus, because all of CBI’s territory is visible from its dock, staff are able to keep a close eye on every boat all at once. In case someone capsizes, Peirson says a motorboat can come to the rescue in two minutes or less (Landlubbers are apparently always calling 911 whenever they see someone tip over, but he assures me the CBI team has it covered).

I’m told to pause and try to feel what little wind there is brushing against my neck, or to look for the areas of the river where the surface has been agitated as the little scraps of breeze make themselves known. Peirson tells me to point the tiller toward the direction of the Citgo sign. He readjusts the jib and we creep toward these patches, and soon the wind has finally picked up, yanking us forward.

Even if we aren’t making that much progress right now, the experience is fascinating. Most people never think about where the wind is slightly faster, and doing so feels like interacting with nature in a completely new and foreign way. I’m struck by the sense that everyone should get the chance to see how that feels if they want to, and that without CBI a lot fewer people would.

Back in the mid-1930s, when a sailing-obsessed Brahmin named Joe Lee got the idea to start training disadvantaged Boston kids to both build and operate makeshift sailboats, Boston’s elite were not impressed. “He was literally taking kids off the sidewalks of the West End, and they built these boats that were pretty funny, and took them sailing,” says Charlie Zechel, who’s been executive director of the club for two decades. “At the time this was seen as the purview of Harvard and MIT men, and Beacon Hill yachts, and it wasn’t for little first-generation immigrant kids.” After a drawn-out battle with local officials over the fate of his quirky, subversive program, and many summers operating without authorization in the Charles, the “Lee Boys” finally went legit ten years later, and incorporated as Community Boating, Inc. in 1946. 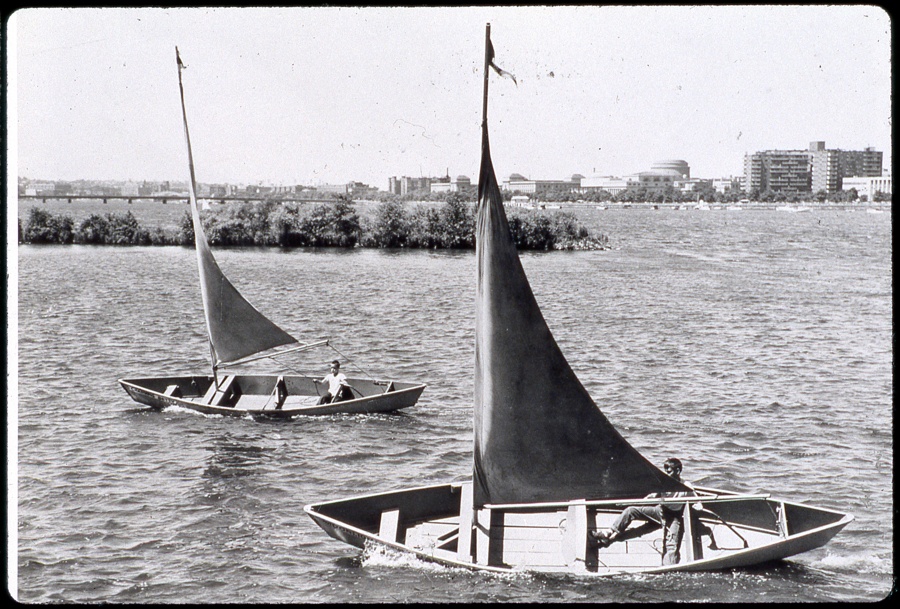 Today, the program is the largest and longest-running in the U.S. Similar boating centers across the country have followed in Lee’s footsteps over the years, many of which use the “community boating” name, or use CBI’s sailing curriculum, which it posts online for free. “CBI is a real hallmark of transformation in the sport,” Zechel tells me, as we glide past clusters of young boaters idling on the calm waters, and a pair of kids tossing a football back and forth atop paddle boards. “There are now hundreds of community sailing programs and they all have similar purposes: to make it so it’s not the sport of millionaires and yacht clubs.”

The inclusiveness of the place means a community has sprung up here, of both kids and adults. I’m told people make lifelong friends spending the warmer months hanging out on the dock. A handful of marriages originated at CBI, and young seafaring singles have a nickname for the club: Community Dating.

For newcomers, it’s sort of shocking how easy it is to get started with the sport. CBI swears adult sailors can be properly trained, and out piloting a sailboat on their own, in just one day. If you showed up for lessons on a Friday afternoon, you could be enjoying twilight on the Charles by that very evening. A month of sailing starts at $99, but a potential member concerned about the price can get in for free, with very few questions asked.

Back on the dock, interview over, Zechel gives me one last pitch. Would I come back, maybe off the clock, and give sailing a try for real? Maybe I will. Maybe, or even especially, if you’ve ever thought sailing was something other people do, you should too.