We Finally Found a Car that Belongs on Newbury Street

"Gumbo," a little dog spotted riding a tiny pink convertible at "Open Newbury Street" is the exception that proves the rule. 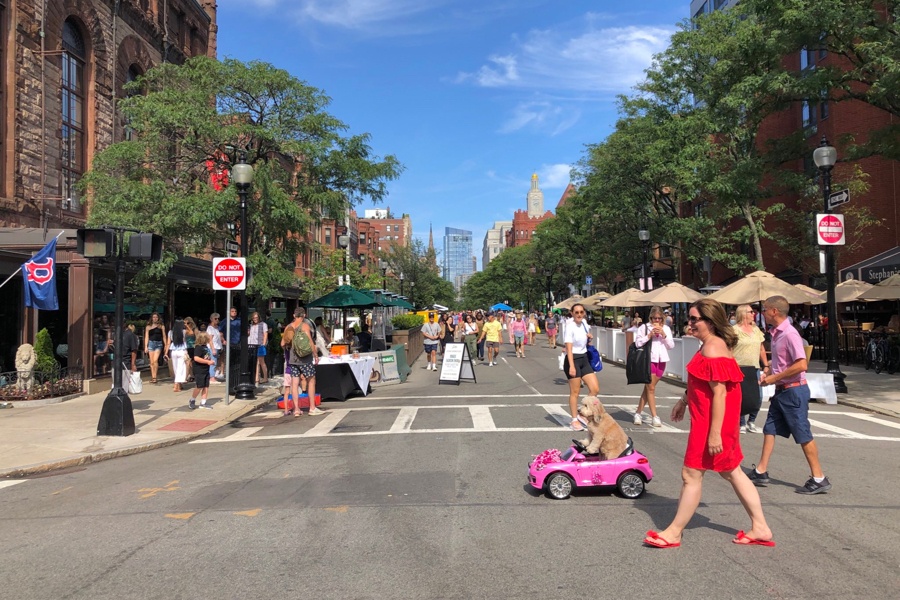 Open Newbury Street, the periodic banning of cars from the popular Back Bay shopping destination, has become one of Bostons most celebrated experiments in pedestrian-only roads. So it was no surprise to see thousands flock to the vehicle-free thoroughfare on Sunday to enjoy a rare treat in this city: an environment with zero cars.

That is, except for one: A tiny pink motorized convertible, with just a little dog behind its tiny steering wheel.

The pup, a mini Bernedoodle named “Gumbo,” quickly became the star of the day on Newbury, as the throngs of shoppers and outdoor block party-revelers couldn’t help but take notice of the furry gal making her way down the middle of Newbury Street, a remote control-wielding owner walking a few steps behind.

Gumbo was among contestants in the Dogs of Joe’s Fashion Show hosted by Joe’s American Bar and Grill. No word yet on whether the adorable mini-motorist took the top prize.

Along the way, Gumbo also attracted the attention of a Boston cop, who issued a ticket for disobeying the day’s ban on cars and, according to video footage captured at the scene, for driving the wrong way.

Boston Police has confirmed that this is the only acceptable vehicle allowed to operate during car-free Open Newbury Street on Sundays in the month of August.

All in good fun down at Open Newbury Street, a day that also saw pop-up shops in tents, music, ping pong tables, and other activities spring up along the road. There’s more planned where that came from, too—Sunday’s event was the first of three Open Newbury Streets planned this summer. The next one will be held Sunday, August 22, with one more to follow on Sunday, August 29 from 10 a.m. to 8 p.m.

In case you needed more proof that open streets ought to be a policy priority for the city of Boston, or that removing gas-guzzlers from the roads yields exciting results, ask yourself this: Would you rather share the road with thousands of honking, swerving, double-parking, gas-belching cars? Or one very adorable Gumbo in a hot pink drop top? It’s hardly a question at all.