My Cuffy’s Cape Cod Sweatshirt Will Never Die, and Neither Will Yours

An ode to the iconic star of Cape Cod fashion. 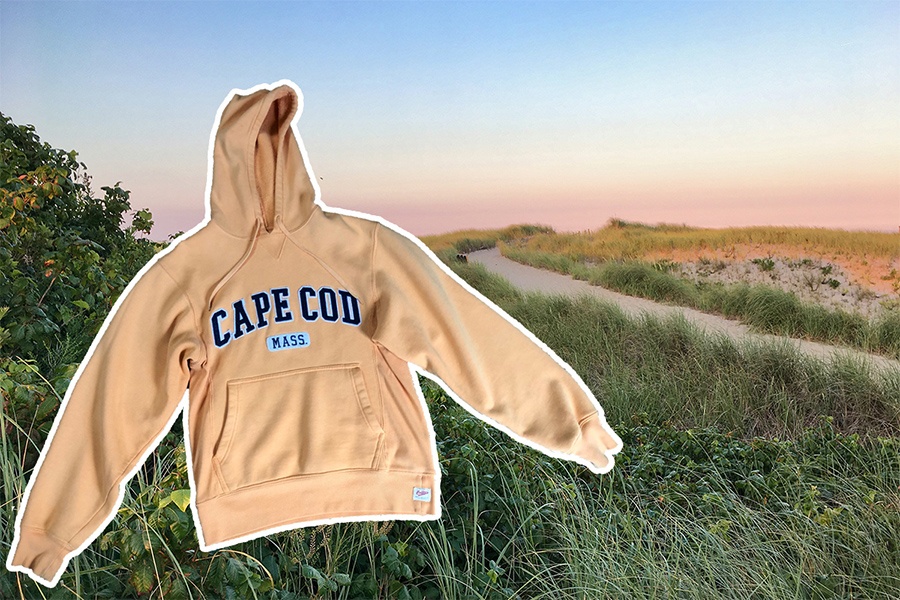 It was a chilly winter’s day in 2006, and I was trying to decide what I’d wear to watch some fellow Central Mass. middle schoolers play basketball. Flipping through a closet filled with bedazzled polos and graphic tees, I decided to go with something understated—something classic. I selected a hot pink Aéropostale camisole to serve as a base layer, and then pulled on the pièce de résistance: a sherbert-colored Cuffy’s Cape Cod sweatshirt.

Just a few days ago, as a 27-year-old adult woman, I sported the same orange sweatshirt to go watch the sunset at West Dennis Beach. A longtime source of comfort, this thing has magically fit me for 15 years. What’s more, it’s been an appropriate wardrobe choice at so many stages of life. When I was up late studying in my college dorm room? My hoodie was there for me. When I needed to throw on something warm for a late autumn hike in the Blue Hills? It was the first thing I reached for. Somehow, my Cuffy’s sweatshirt has remained unchanged since I was a tween, a teen, and beyond. It’s essentially immortal, and I’d guess that yours is, too.

The classic Cuffy’s Cape Cod sweatshirt is an item of clothing practically every New Englander owns. I’m sure a version of it has already formed in your mind—a drawstring hoodie emblazoned with those bold block letters: C A P E C O D. You’re sure to see one within minutes of crossing the Sagamore, but they’re easy to spot almost anywhere from Bar Harbor to Newport, on cool summer nights straight through to the dead of winter.

Venture out for a plate of fried clams down the Cape, though, and you’ll witness an entire collection of them: a mother and daughter sporting matching sunshine yellow ones, a little kid clad in a red version, the dads of the region opting for either navy blue or heather grey.

Part of the appeal, I think, is the sweatshirt’s no-nonsense design. It hasn’t changed much since Dominick “Cuffy” Albano rolled out the first version of the sweatshirt in the early 2000s. Albano founded Cuffy’s in 1994. After a few years of selling t-shirts out of his mom’s car on the side of Route 28 in West Dennis, he moved his famed Cape Cod tees into a brick-and-mortar store a few doors down. (Now, Cuffy’s has four locations and over 100 employees across the Cape during the summer.)

In those early days, Albano set out to sell a sweatshirt with the most classic of classic designs. So, he went out and bought loads of sweatshirts from Harvard, BU, and other local college bookstores. Studying the samples, he figured out what he liked best about each model, then built his own version.

There’s just something about wearing a bulky sweater with giant capital letters on it that Bostonians can’t resist. It’s a straightforward proclamation: “This is a place I love!!” Though unlike the classic maroon HARVARD design, for instance, Cuffy’s sweatshirts come in 16 colors that change every season.

Their durability, meanwhile, appeals to a New Englander’s innate sense of Yankee thrift. Albano’s selection of high-quality combed yarns and dyes is part of the reason the sweatshirts seem to last forever—these are not your average t-shirt emporium pullovers. Their knitting process reduces each sweatshirt’s amount of shrinkage in the wash, he explains, while quality ribbing, stitching, and embroidery hold it all together for years.

“To the untrained eye, [Cape Cod sweatshirts] can all look the same, but they’re not,” Albano says. A Cuffy’s original has the famed block letters stitched on, a small patch underneath that reads “Mass.,” as well as a small sewn-in tag in the bottom corner, ostensibly to prove its authenticity. Though Cuffy’s sells plenty of other Cape Cod-branded products, from shorts to tank tops, one of the classic hoodies goes for $39.99. “There are so many ways to do it less expensively, but we didn’t go down that road,” Albano says.

Scores of families are happy to pay for a genuine Cuffy’s specimen if it means a lifetime of cozy cotton embraces. They don them in family portraits, wear them to reunions down the Cape, and some even sew quilts with them. Among the in-crowd of Cuffy’s sweatshirt owners are my mom, my dad, my brother, my grandparents, a handful of my cousins, all the people I saw at Kream n’ Kone last night, and a woman named Donna who commented on Cuffy’s Facebook page to say she owned 42 Cuffy’s sweatshirts: “Some were 15 to 16 years old, and still in great shape! It was hard to do, but I pared down my number of sweatshirts to 12—so I could justify buying more,” she wrote.

When I try to think of all the times I’ve spotted the sweatshirt in the wild—near and far—I quickly lose count. There was that time I saw a Cuffy’s original while visiting the Grand Canyon a few years ago, the endless sightings in my hometown Market Basket, and the occasions where I’ve noticed people on planes pulling them over their heads. They seem to be everywhere, spreading the comfort of the Cape from coast to coast.

Today, my beloved orange hoodie hangs next to another newer hoodie: my first brand-new Cuffy’s sweatshirt in over 20 years. It’s a lovely shade of blue with yellow letters. I find it soothing (and only a little freaky) to think of the life events it’ll carry me through next.

Albano told me there are people who want to be buried in their sweatshirts. Now this is an idea I’ve never considered for myself—until now. It seems my Cuffy’s hoodie will never die, and reader, neither will yours.