It still hadn't announced a location for its planned September 2 opening. 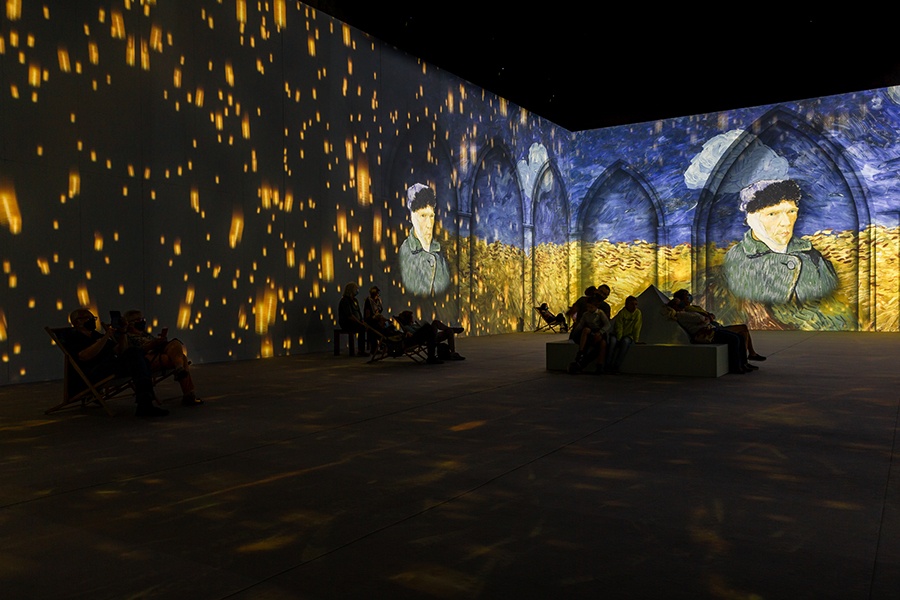 Update, 9/3/21, 3 p.m.: Per the Boston Globe, the exhibit will now open on Sept. 29 at the Strand Theatre in Dorchester. If you had a ticket for a date prior to that, you can get a full refund, or pick a new time and date, they promise.

Who would have thought we’d spend so much time this year talking about, of all things, Vincent van Gogh?

Against all odds the artist’s work—more specifically, digitally enhanced renderings of his work in “immersive experiences”—underlies one of the most fascinating and puzzling sagas to unfold in Boston this year.

And now, there’s been a new development. One of the two (yes, two!) “immersive” van Gogh exhibits set to hit Boston in the coming months has been quietly postponed.

The event, called Van Gogh: The Immersive Experience had been set to debut here on Thursday, September 2. But it had been shrouded in mystery, and more than a little bit of skepticism, since March. That’s in large part because, despite more than six months of saturation-level social media marketing for the event, its website had yet to reveal the “secret location in Boston” where it will supposedly be held.

Then with just two days to spare, and its location still remaining mysterious, eagle-eyed Boston.com reporter Kevin Slane this week noticed that moderators of a Facebook page for the exhibit have begun telling people in Facebook comments that it has been indefinitely postponed.

“We are happy to bring our Van Gogh immersive experience in Boston,” a Tuesday message to an apparently frustrated ticket-holder reads. “Unfortunately, we have had to delay our Boston opening, and reschedulings will be communicated via email with all ticket-holders. The venue will be announced very soon. We appreciate your patience, and we apologize again. Thank you!”

The exhibit’s organizers have yet to make any kind of public announcement about the change of plans.

In a statement, a representative blamed “the impacts of COVID-19 restrictions on global transportation logistics” for the last-minute delay, and said we should expect updates “in the coming days.”

The company behind the event, a venture capital-backed European startup called Fever, has planned similar Van Gogh exhibits in nearly two-dozen cities around the world, according to its website, and is currently selling tickets to 15 of them simultaneously. Listings show that all the other cities have locations listed, except for Boston and Seattle. Seattle’s exhibit is set to kick off September 10.

At least one other Fever-produced edition of the exhibit, set to debut in Philadelphia, has also been postponed.

Controversy has followed Fever for months. Back in March, when it first announced it would set up an exhibit in Boston, some ticket buyers reported feeling duped, as they mistakenly believed they had paid to see an event called Imagine Van Gogh, which is set to debut at Boston’s Sowa Power Station in December. The dust-up shone light on Fever’s dismal rating with the Better Business Bureau, which gave it an “F” over a number of customer complaints over such things as unresponsive customer service and a tendency to cancel events at the last minute.

Locally, the drama escalated this year over allegations that Fever had inappropriately commandeered the branding of a Boston events marketing group. Fever had been promoting its van Gogh event on Facebook and Instagram using the name “Secret Boston,” and with the website SecretBoston.com, although it had no connection to Secret Boston, the long-running events promotion company and online community headquartered in Jamaica Plain. A legal dispute and public war of words ensued, and at some point in recent weeks, Fever appears to have swapped out its “Secret Boston” branding. Its social media accounts are now dubbed “Boston Uncovered,” and the SecretBoston.com website has been taken down.

Michelle McCormack, the founder of the original Secret Boston, who has been crowdfunding her fight with the company by selling merch with the word “Real” on it, declined to comment due to the ongoing legal matter.

In the meantime, tickets for the event are still on sale. And for anyone worried that they handed over their hard-earned cash (tickets start at $36 a pop) for an exhibit that may, or may not, ever actually happen, organizers have apparently been suggesting an attitude adjustment.

Here’s how one recent Facebook exchange went on the page dedicated to the exhibit:

“It almost looks like a scam,” one commenter wrote back in July. “No certain date or venue?”

“It is all part of the experience,” the page’s moderator replied, punctuating the message with an emoji of a flower and adding, “[T]he surprise will be worth it.”