The Hot Take of the Century: New Hampshire Has the Nation’s Best Lobster

I didn't believe this before. I don't think anyone on earth did? But now I do. 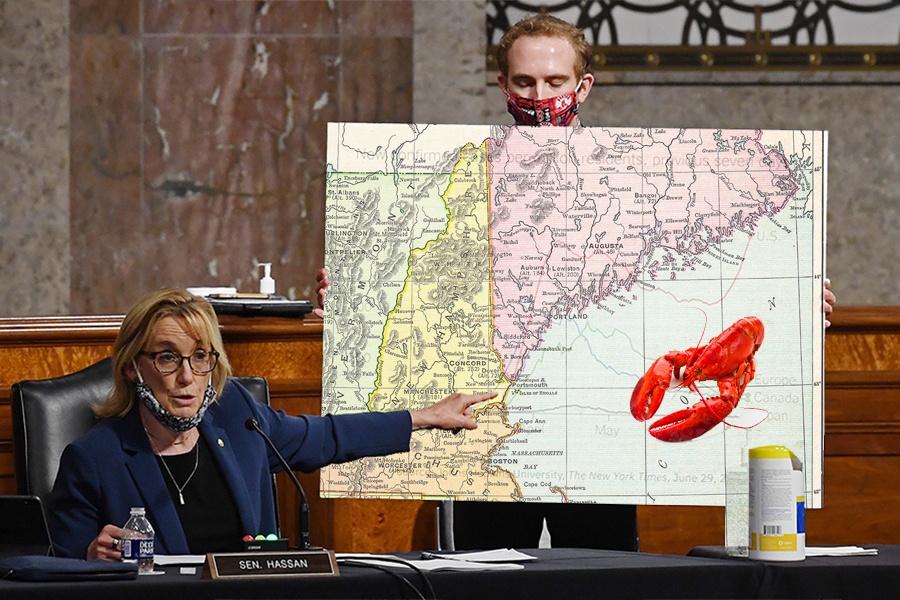 A great many variations exist in the culinary discourse around lobster. Some enjoy the delicacy boiled, some steamed. There is a constituency for both cold lobster and hot, those who opt for the ease of chowing down on rolls, or the down-and-dirty handiwork required to dig the meat straight out of the shell. Depending on who you ask, the best bites can be found in the claws, the tail, or for the truly in the know, the knuckles, legs, and fins. Where to find the best lobster dishes in Boston is a constantly shifting and endlessly debatable terrain, one that we have happily been navigating for you, dear readers, for decades.

But I gotta hand it to Maggie Hassan, senator from the great state of New Hampshire. Because no one saw this take coming. When Hassan was celebrating National Lobster Day this weekend, she declared on behalf of her constituents that the best lobster in the world hails from none other than, you guessed it, New Hampshire—a state whose access to the lobster-rich Atlantic is the 18-mile-long stretch of coast between Massachusetts and Maine.

Granite Staters know that we’re home to the best lobster in the country!

Now don’t get me wrong, New Hampshire does in fact enjoy some very tasty lobsters. If you ever find yourself at any of the lovely surfside seafood restaurants lining the New Hampshire coast, by all means enjoy the bounty of crustaceans nature provides for you there. But has anyone in history ever claimed that this, the segment of New England ocean wedged between Hampton Beach and the Piscataqua River, is the Sweet Spot for the nation’s lobstering? Anyone at all?

Mainers, of course, were not happy about this incredible opinion, given their giant and craggy-shored state’s vastly bigger and better known lobstering operation that has been a point of pride for aeons. In its unsigned editorial this morning, the Bangor Daily News declared the state’s residents were “steamed.”

Hassan appears to have heard these gripes, but is only doubling down.

Happy Monday! I see the good people of Maine were displeased with this tweet over the weekend … doesn’t make it untrue though. https://t.co/Nai7Dwwwtk

Not a lot of substance to this, of course. But indulge me for a minute. It’s rare you hear a take so fresh and spicy, not to mention completely devoid of political content, from someone in elective office, that manages to enrage an entire neighboring state. It’s also fun to imagine that there is some magical force at work in the few square miles of geographically identical ocean floor that technically speaking belongs to the Granite State, some differentiating blend of fauna from which they derive that distinct New Hampshire flavor—a flavor that all Granite Staters proudly know about and embrace, all the way from Nashua to deep in the White Mountains, and up toward Canada in the northern hinterlands.

For the best lobsters in the world, in my (newly acquired) opinion? Gotta go to New Hampshire.