What Was It Like to Bring Back the Boston Marathon and HOCR This Year?

On the eve of their first in-person events since 2019, longtime Boston Athletic Association CEO Tom Grilk and Head of the Charles regatta executive director Fred Schoch reflect on the defeats and victories of the past year and a half. 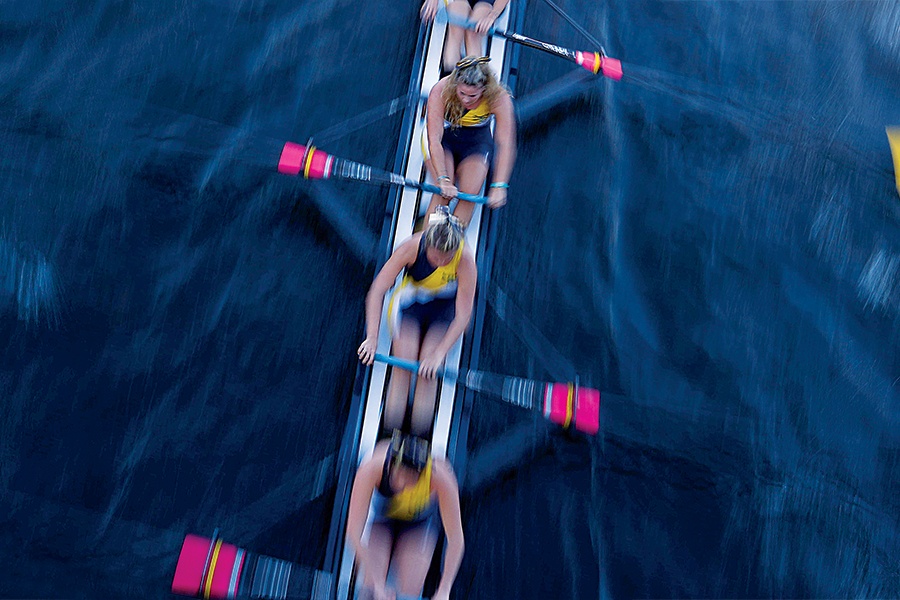 On the eve of their first in-person events since 2019, longtime Boston Athletic Association CEO Tom Grilk and Head of the Charles regatta executive director Fred Schoch reflect on the defeats and victories of the past year and a half.

Grilk: There are 9,000-plus people who work on the Boston Marathon every year. They treat it personally; it is their race. And they’re ready for anything. They’re so prepared that when something goes wrong, and you can never predict what it’ll be—hot weather, terrible cold, driving rain, lightning—they’re ready to do what’s necessary, and they have the courage to make decisions under the most extraordinarily difficult circumstances—of course, never more than in 2013, when the bombs went off. Being at the center of all of those people is the greatest
of privileges.

Schoch: The Head of the Charles Regatta is really known for being run like a Swiss train. Behind the scenes, though, it’s a multi-headed hydra-beast that we have to tame every year. We are a tiny organization: We have a board of directors of 15 people, a race committee of 12 to 13 people, and then we have a race operations committee of about 100 that divides into 35 to 40 subcommittees overseeing about 1,500 to 1,600 volunteers total a day. It is really a well-oiled machine. The only other time we had to cancel the regatta was in 1996—it was a 100-year storm that flooded the river. After that, I convinced the board to extend the event to two days. 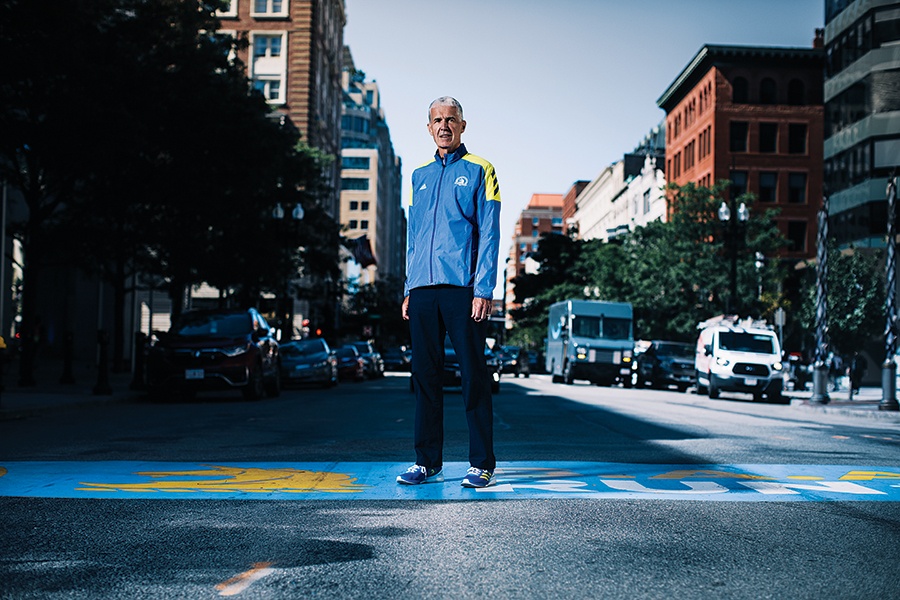 The BAA’s Tom Grilk and the Head of the Charles Regatta’s Fred Schoch take a moment to reflect before their respective big days. / Photo by Matt Kalinowski

Grilk: Going back to March 2020, as we were all learning about the severity of COVID, at first we all hoped it would come and go. Then it became clear it wouldn’t go away quickly. Mayor Marty Walsh did a great job of bringing everyone together, arranging meetings among the leaders of the eight municipalities that the marathon runs through. They were in-person meetings—among the last prior to everything shutting down. We got together in the Eagle Room at Boston City Hall so everyone could talk out their concerns and how they could work most effectively together. I can’t remember any sort of disharmony at all; everyone was just trying to come to grips with what was going on. Each town faced problems of differing scope—Boston and Ashland, of course, are very different. The announcement of what was then a postponement was Friday, March 13, and I think everyone had gathered that day, to get ready to meet the press.

Schoch: The decision to cancel the in-person regatta in 2020 was made by consensus with my board of directors and the office team. We deferred the decision as long as we could, until it became obvious it wasn’t going to happen. It was devastating for everyone, but at the end of the day, it was a public safety issue. We just couldn’t do it. I joke that I’m like a wedding planner, planning one event for the year. I wish I could have more ups and downs through the year, but I don’t. My job is to get ready for this one thing. But in retrospect, the cancellation gave me time to recharge my batteries. I holed up at my home in Hanover, New Hampshire, and everyone learned to work remotely. We were Zooming ourselves silly like everyone else.

Grilk: A number of our peer organizations that put on other major marathons acted in an altogether sensible and rational way during the pandemic, cutting their staff back for a period of time and cutting compensation for people who continued to work. But because we have a smaller staff than others, we decided at the BAA to keep everybody around. It had been our plan anyway to considerably expand the amount of community service and community engagement we do, and so we decided to dig into doing that work as well as get ready for putting on the marathon whenever it was next feasible. And of course, last fall we held a virtual marathon experience to get people running. Charities were able to take part, and they raised many millions of dollars. 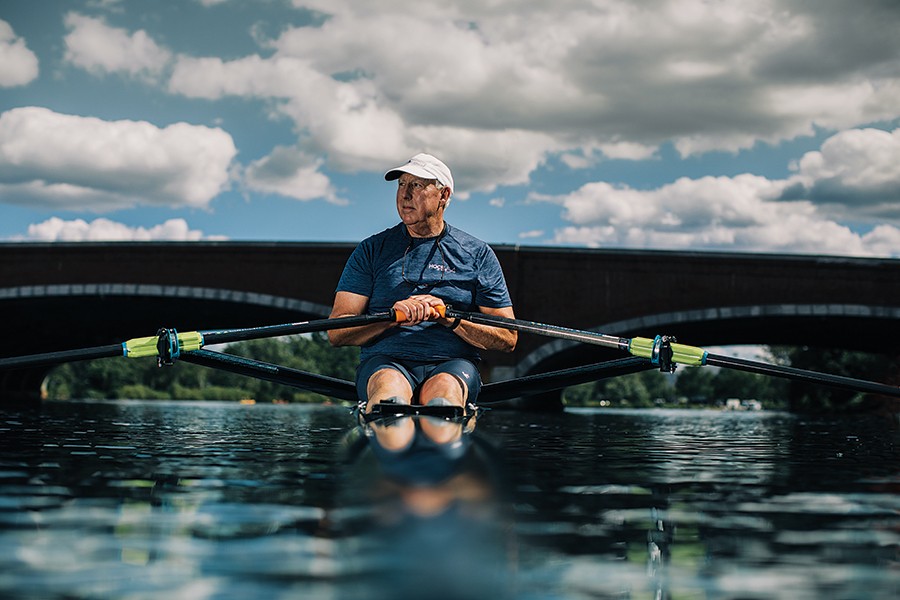 The BAA’s Tom Grilk and the Head of the Charles Regatta’s Fred Schoch take a moment to reflect before their respective big days.

Schoch: We ran a remote event in 2020 as well. We called it 4702, because that’s the distance of the Head of the Charles—4,702 meters. We had competitors enter the regatta globally; basically, they would row the distance on their home course and submit a time. And we raised money for charity in so doing. I was really skeptical at first because I thought people would be burned out doing remote events, but they really embraced it. We had something like 3,000-plus entries from around the world, from Switzerland to France to Croatia to California to Chicago.

Grilk: When it finally began to look as though large-scale gatherings could take place again come fall, we and the other five members of the Abbott World Marathon Majors all scheduled our events in about a six-week period, from late September to early November. Everything was going along on a nice trajectory as the world became an increasingly safer place, and then the Delta variant came along, and we returned to an environment of uncertainty. But we’re moving full steam ahead for the marathon on October 11 as well as working on the community service aspect we’re initiating for our 125th anniversary. In a way, the easier thing would have been to just wait until next April, in hopes that things would get better, but we view the marathon as something we should do because it’s something that people have come to rely on in a variety of ways. It’s a source of athletic competition; it gives people something to shoot for in terms of their own personal health and fitness; generations of families have been coming out to watch the race. And we also wanted to help with the reopening of the economy. In recent years the Boston Marathon has generated some $200 million a year for the local economy, and tens of millions of dollars for charity. I suspect we may lose money on it this year. But if we can do something that brings some joy into people’s lives and brings some money into the economy again, then we are delighted to do our part.

Schoch: We’re really excited for the 2021 race. We’ve maintained our relationship with Mass General Brigham, which has been our epidemiology partner throughout the pandemic. We feel like the variant is a nuisance and we’re taking it seriously, but our medical advice is that we are an outdoor event where people travel in pods, and they should feel safe coming to the regatta and competing. We’re not compressed indoors; it’s not in a stadium or arena. I think planning has been much more stressful on the team and volunteers; people have concerns about being exposed. But it’s been two years since our last event. There’s so much pent-up excitement. This is like Christmas in October. 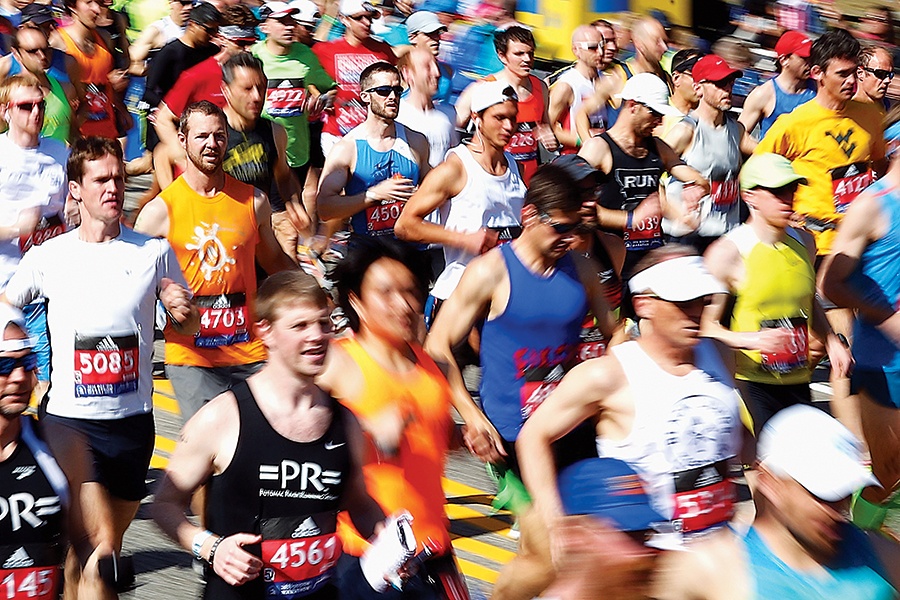 Everything You Need To Know About the 2021 Boston Marathon