A Sudden, Wild End to Columbus Day in Boston

With the snap of a finger, it's gone! 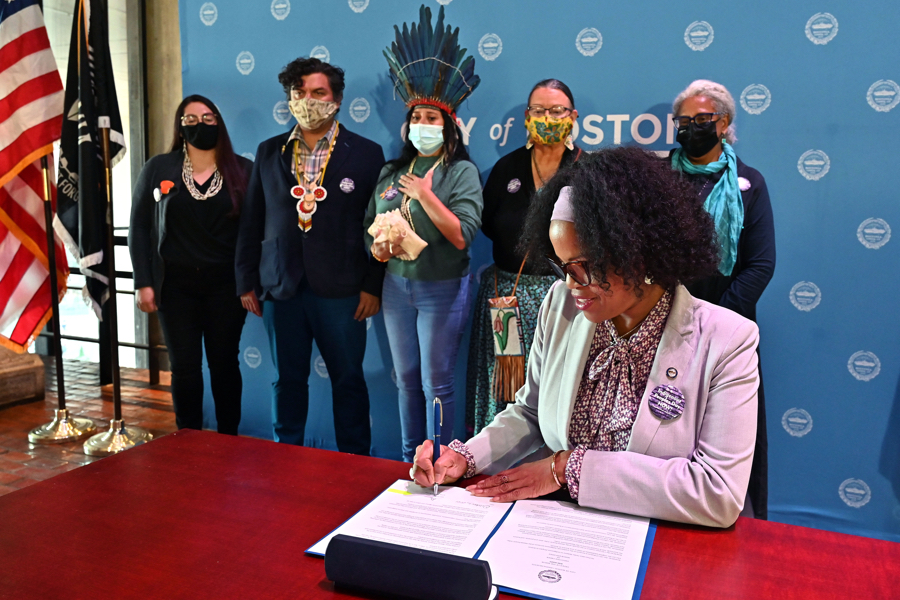 And just like that, Columbus Day has come to an end in Boston. Acting Mayor Kim Janey made it so with the stroke of a pen earlier this week, following neighboring cities’ lead in ushering in the era of Indigenous Peoples’ Day.

She did so via executive order that scraps the celebration of Columbus and instead recognizes the state’s native communities on the second Monday of October from here on out. There was no warning that the declaration, which dives headfirst into the hornet’s nest that is anything Christopher Columbus-related these days, was coming. “I don’t need to have a public hearing to sign an executive order,” she reportedly said, when pressed on this fact. She simply did it because she could.

Today I stood with @NAICOB91 & @mahtowin1 to declare every 2nd Monday in October #IndigenousPeoplesDay in the @CityofBoston. pic.twitter.com/Sz54Ww3FCB

However you may feel about this sudden turn of events, it can’t be overstated how wild a move this is, considering how hot feelings are and the temporary nature of Janey’s office.

Janey, who has only been in the role for six months, and will be leaving it soon after losing a preliminary election to Michelle Wu and Annissa Essaibi George in September, is now a lame duck. Either Wu or George will take her place in mid-November, and there have always been limitations to what the acting mayor can do while occupying the corner office until then.

But she is not alone in pulling this trigger. On Friday of this week, just before the long weekend kicked in, President Biden made a similar move, becoming the first president to issue a proclamation celebrating Indigenous Peoples Day nationwide. Interestingly, while Janey’s executive order says explicitly that Boston will celebrate Indigenous Peoples Day “in lieu of Columbus Day,” Biden’s proclamation makes no mention of Columbus. Biden, threading the needle here, it seems, also issued a proclamation celebrating Columbus Day (which, it’s worth noting, went out of its way to “acknowledge the painful history of wrongs and atrocities that many European explorers inflicted on Tribal Nations and Indigenous communities.”)

Still, this is not the way these things typically go in this city. Other symbolic but significant changes to the names of things in Boston have been drawn-out affairs. Expelling Tom Yawkey’s name from the street next to Fenway Park amid a reckoning on the former Red Sox owner’s racially fraught past took years of soul-searching and hearings to finally swap out the signage for Jersey Street. Before the city officially changed the name of a pivotal square in Roxbury from Dudley (so named after the state’s slave trade-enabling second governor) to Nubian (a nod to an ancient African civilization), Mayor Walsh insisted on putting the question up for a non-binding referendum. The push in recent years to rename Faneuil Hall, which would also decouple the landmark from its namesake and the fortune he derived from the slave trade, has wended on for years. Walsh had no interest in renaming it, and the campaign to do so has cooled to a slow boil—for now.

So the sudden deletion of Columbus Day is strange, considering how much baggage any reconsideration of Columbus’ legacy carries. Some Italian-Americans in Boston and elsewhere take any effort to cease lionizing the explorer, who we have celebrated with a federal holiday for more than 80 years, as a deep insult. This has forced some local politicians into pretzel-like shapes this week (see: Lydia Edwards), and sowed a good amount of chaos about a contentious issue in an election year.

That is not to say that it wouldn’t have happened in Boston eventually. Cambridge made the switch in 2016. Somerville followed suit two years later. Two dozen Massachusetts communities have done the same. It was just a matter of time, and both Wu and Essaibi George have indicated support for the name change.

The winds have also already been shifting in Boston regarding the Columbus legacy. After the Columbus statue on a public park along the North End Waterfront kept getting its ass kicked over and over, the city ultimately opted to remove it from its perch—it will live on in less vulnerable territory at a local Knights of Columbus, which is free to put up whatever statues it wants on private land.

But to do it now? In the waning days of a temporary, unelected mayoralty, in a year in which the three day weekend has already been reoriented around the rescheduled Marathon anyway? With zero build-up, zero public meetings to perform the Hearing of Concerns, and zero attempts to Bring the Community Together for Important Conversations, or any of the usual pretense? It’s really something.

If you’re on board with this shift, then maybe you’re pleased that Janey has ripped the band-aid off in this way. If not, then consider this an opportunity to get that all-important thrill out of continuing to call the holiday Columbus Day in perpetuity, and carrying this torch in comment threads for years to come.

All in all, a hell of a mic drop on the way out the door.