For whatever reason, kids with fakes overwhelmingly said they were from Connecticut. And there was not a single Hawaiian in the bunch. 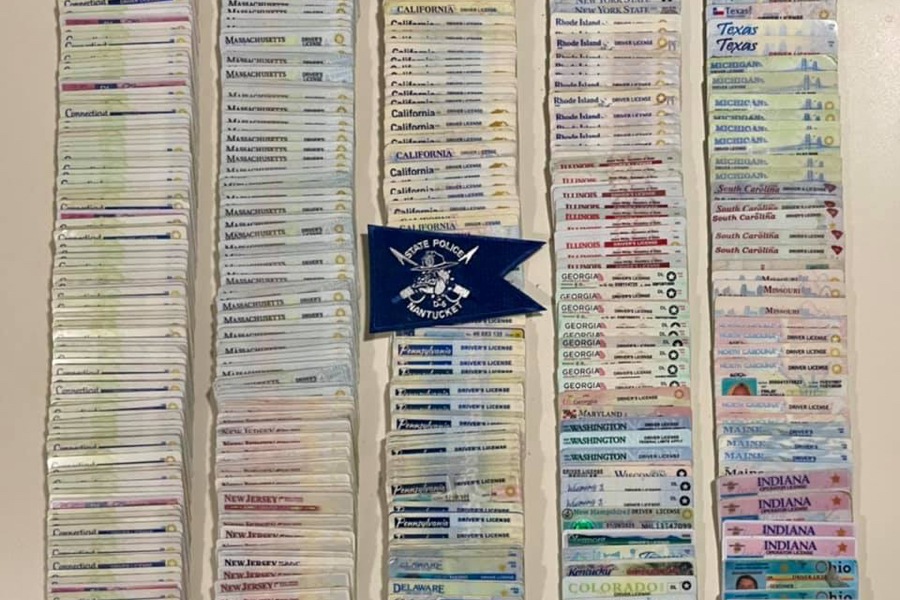 Looks like bouncers were pretty busy in Nantucket this summer! That much is clear from a PSA delivered this week by the Massachusetts State Police, which says bars on the island seized “more than 500 fraudulent IDs” from youths over the course of the season.

It’s customary for law enforcement to share photos of contraband after big hauls such as these, and to use the images as reminders to would-be law-breakers not to follow in their peers’ footsteps. If you don’t want to add to their collection of illicit plastic, this victory lap of a Facebook post suggests, think twice about trying to get a fake past the security staff on the Little Grey Lady of the Sea.

It’s a Sisyphean task, of course. Fake IDs are everywhere: In just its first few months the Encore casino seized some 2,500 of them from kids trying to sneak onto the gaming floor. A few years ago, officials nabbed 112 fake IDs at one convenience store on St. Patrick’s Day.

But photos like this also offer us a rare peek at trends in the seedy world of young drinkers who insist on rubbing shoulders with adults at bars.

Massachusetts State Police spokesman Dave Procopio says this bounty of fake IDs is unusual for the island, as this is the first time staties have collaborated with Nantucket’s most popular bars, asking them to pass them along to police rather than simply throwing them out or stashing them away. So we have more raw data than ever to parse here about where kids with fakes are telling bouncers they’re from.

Police say they didn’t keep an exact tally of which states were depicted on each of the seized IDs. They could say only that roughly 150 were from Connecticut, and roughly 100 were from Massachusetts. For the rest of the states on the table it looks like we have to eyeball it. Which, of course, I did. So here in very, extremely, unscientific order, is a list of all the phony IDs seized in Nantucket this year, and where they all purport to be from:

You’ll notice that these numbers don’t add up to 500, so like I said, unscientific. But you get the gist, and some interesting patterns emerge here.

Interestingly, there were just as many IDs from California as from New Jersey, which I wouldn’t have guessed, especially given there were but 11 IDs total seized from the entire state of New York. I’ll note that there was only one lonely fake ID purporting to hail from both Vermont and New Hampshire, and none from Maine, but 13 from Rhode Island. Twelve strangely came from, of all places, Delaware.

The biggest lingering question, though, is why Connecticut, and not Massachusetts, would come out on top. Have underage drinkers decided that Connecticut licenses are particularly easy for the many online purveyors of fake identification to forge? Is there some complex triangulation at play here? As in, don’t go for the state in which you actually live, but don’t pick a locale so exotic it arouses suspicion? (I’ll note that there does not appear to be even one Hawaiian ID in the bunch, which fans of Superbad will recall was the state famously chosen by the Fogell character for his famously not-believable fake license). Maybe the youths aren’t overthinking their choice at all, and are simply picking up forged identification made to look like those in the state where they actually live?

State Police aren’t sure, but Procopio says that “Troopers report that there seemed to be a lot of Connecticut kids on the island in July.”

Police can’t provide data on where the fake ID-holders were actually from, because in most cases kids caught with fake IDs aren’t charged with a crime—they simply have their contraband confiscated and are sent on their way. In some cases, police responded to the scene of a disturbance to find that a disorderly patron was in fact an underage drinker with a fake ID. In one case, he says, one of these minors had three fakes on him.

Procopio says that in the day since the state police posted the image on Facebook, they’ve been deluged with comments poking fun at or making light of the situation, but insists the situation is no laughing matter. “If one of these kids used these fake IDs to get intoxicated and then got into a crash that causes injuries, or worse, to themselves or someone else, that would be a serious and tragic thing, and that’s what we want to prevent,” he says.