From “Cowboy Up” to “Dancing on My Own,” the Obsessions That Defined the Playoff Red Sox

A history of the traditions, dance moves, and memes that fans and players embraced over the years. 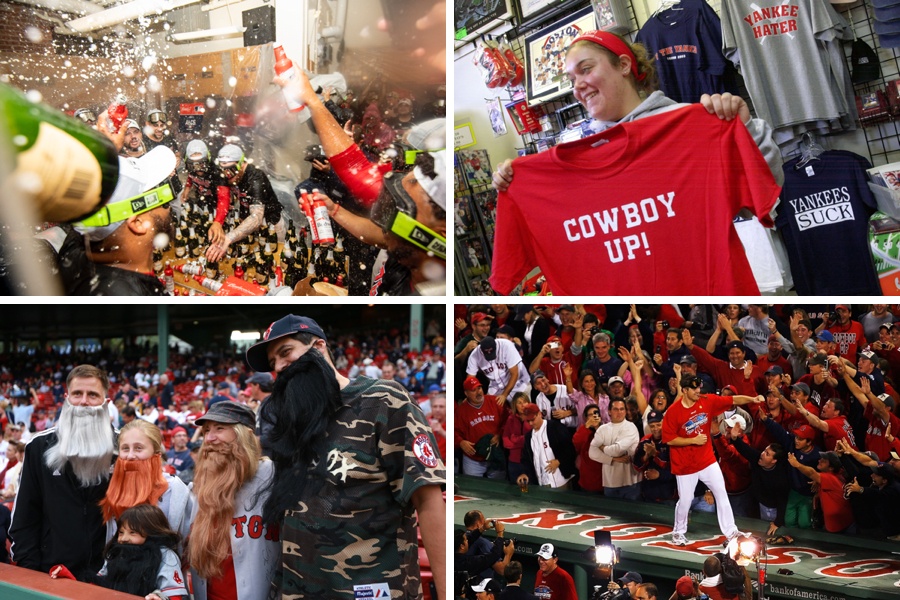 The movie-like ascension of the 2021 Red Sox from tying for the wildcard to ALCS home run juggernaut has an unlikely soundtrack: DJ Tiësto’s remix of Calum Scott’s cover of Swedish pop star Robyn’s “Dancing on My Own.” But if the remixed dance number seems like an odd fixation for a professional baseball team, it shouldn’t: The Red Sox and their fans always seem to find obsessions to latch onto in the postseason. Here are some of the mantras, music, and dance moves that have defined the team’s magical October runs over the past two decades. 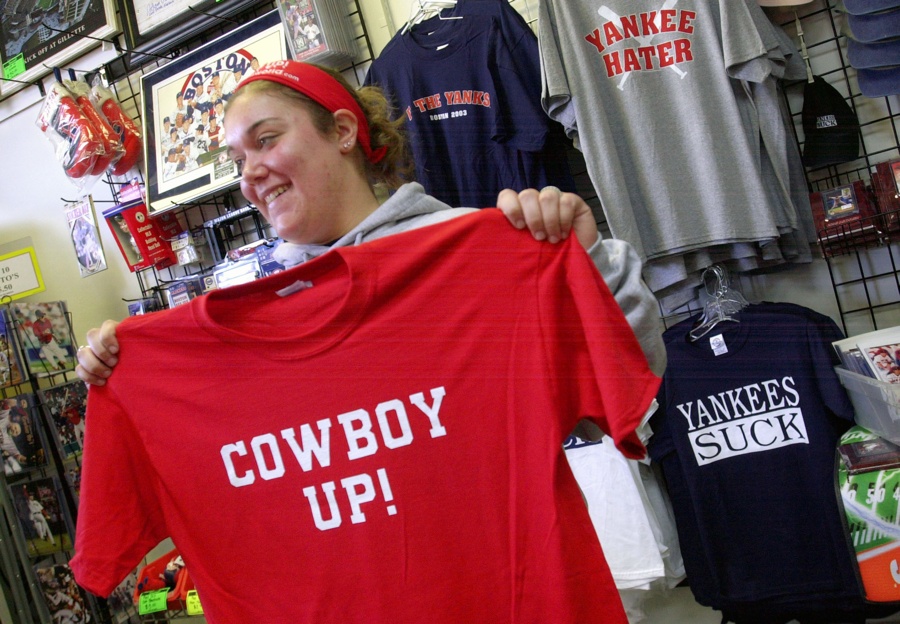 Alycia Russo displays a “Cowboy Up” T-shirt to a customer October 10, 2003 at Fenway Sports World across the street from Fenway Park a day prior to game 3 of the American League Championship Series. (Photo by William B. Plowman/Getty Images)

You might remember 2003 as the year a little-known slugger named David Ortiz came to town, but it was Trot Nixon, Kevin Millar, and Mike Timlin who turned a rodeo expression into the team’s guiding principle. “Cowboy up” was about taking your licks and getting back on the horse—a familiar experience for Boston fans. An extra-innings loss to the Yankees in game seven of the ALCS was a heartbreaking blow, but sure enough, the team cowboyed up and looked toward 2004. 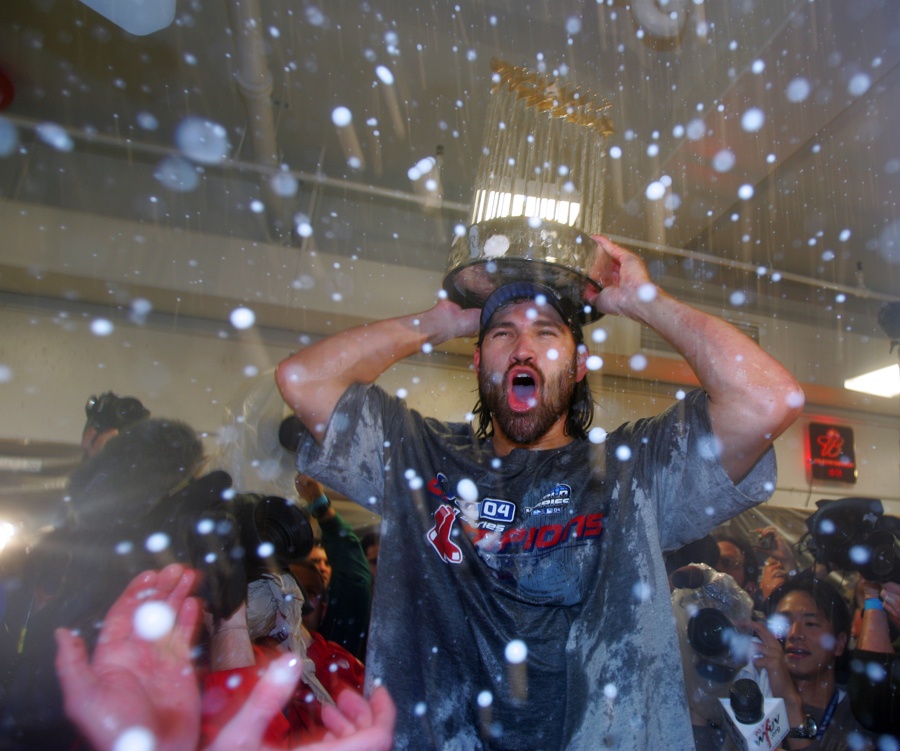 Johnny Damon of the Boston Red Sox celebrates after winning game four of the 2004 World Series against the St. Louis Cardinals at Busch Stadium on October 27, 2004. (Photo by Brad Mangin/MLB Photos via Getty Images)

Johnny Damon christened the ’04 squad “idiots” for their joyful exuberance and irrational belief in themselves. That belief helped the team pull off the greatest comeback in baseball history against the Yankees before sweeping the Cardinals to claim the franchise’s first title in 86 years. But a little liquid courage may have helped, too: After the season ended, Kevin Millar revealed the players’ pregame ritual included sharing a shot of Jack Daniels before taking the field.

Consummate pro Mike Lowell may have been World Series MVP, but Boston’s slightly unhinged closer provided the defining images of Boston’s 2007 championship run. Though he was born and raised in Louisiana, Jonathan Papelbon channeled the city’s Irish heritage by celebrating each series win with a Riverdance (or at least something approximating a Riverdance) on Fenway’s grass. 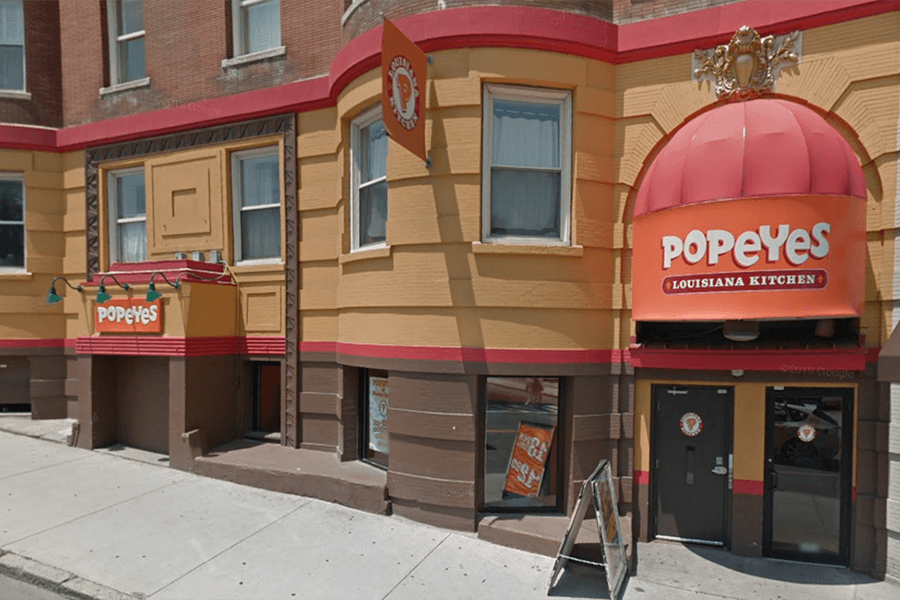 Not all Sox rituals are remembered fondly. The 2011 team was among the most talented in the history of the franchise, but they collapsed down the stretch and lost a playoff spot on the final day of the season. Reports soon emerged detailing several pitchers’ habit of playing video games, drinking beer, and eating fried chicken—sourced from the Kenmore Square Popeyes, to be exact. The “chicken and beer” scandal contributed to the firing of beloved manager Terry Francona and set the stage for a miserable last-place season in 2012. Sadly, this infamous landmark of Sox lore closed for good in 2019. 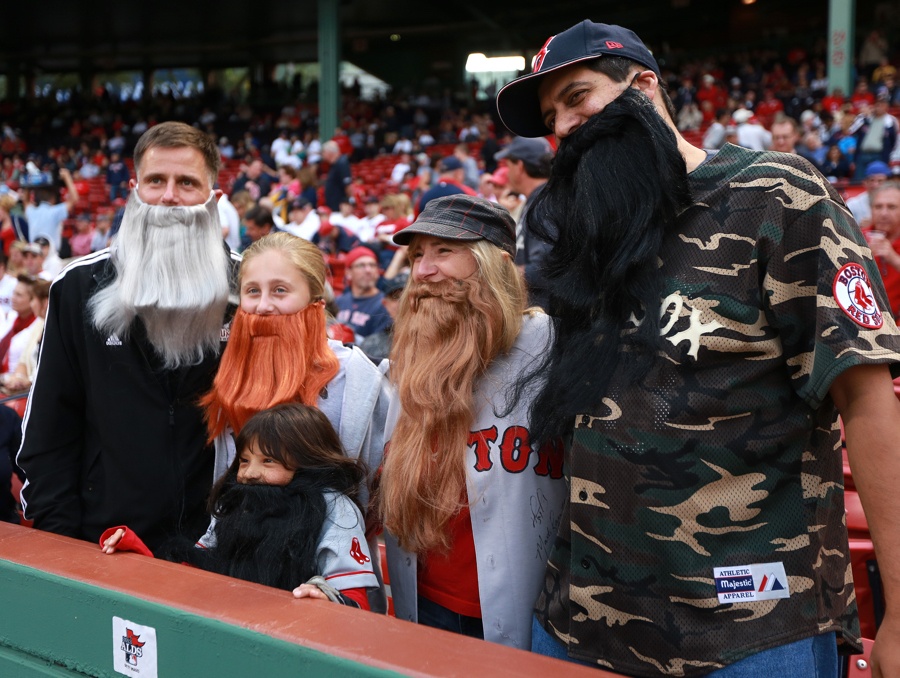 From left to right: Silvio and Isabella Bonvini, 12, and Laurie, Shauna, 9, and Chris Sperou, all from Marlborough, display their playoff beards before  Game Two of the ALDS at Fenway Park. (Photo by Barry Chin/The Boston Globe via Getty Images)

After the marathon bombing rocked Boston in April, these worst-to-first Red Sox charted an improbable championship run that embodied the city’s resilience. Complimenting the team’s scrappy vibe was its collection of impressive facial scruff. “Fear the Beard” became a rallying cry across Red Sox nation, as fans tried their best to match the Civil War-style whiskers worn by players like David Ross, Jonny Gomes, and Mike Napoli.

When #BrockHolt and the entire @RedSox team are jamming out to our very own @moneymav’s “Red Sox Nonstop Remix” on their flight back to Boston! 👏🙌⚾️

For all their regular-season dominance, these Red Sox were a slightly more restrained bunch—at least until Yankees slugger Aaron Judge trolled them by blasting “New York, New York” at Fenway. The Sox waited until dispatching the Yankees in four games before gleefully celebrating with their own rendition of Sinatra’s classic. Soon after, they kept the pettiness flowing by popping champagne to “California Love” at Dodger Stadium in Los Angeles. But the plane ride home was all about Boston, as the team jammed to a Sox-inspired remix of Drake’s “Nonstop.”

This year’s underdog Sox have doubled down on signature celebrations, from polite waves after hits to laundry cart rides following home runs. But they might best be defined by their devotion to “Dancing on My Own,” an anthem as unlikely as they are. Led by backup catcher Kevin Plawecki, Boston has been playing the track (a Dutch remix of a British cover of a Swedish pop song) all season—including during an off-day singalong at Gillette. And after knocking out New York and Tampa Bay in the first two rounds of the playoffs, you can bet they’ll keep playing it for as long as they keep winning this October.