Jaywalking in Boston Is a Crime in Name Only. Thank Goodness.

A recent push to make jaywalking fines actually sting should only strengthen our resolve. 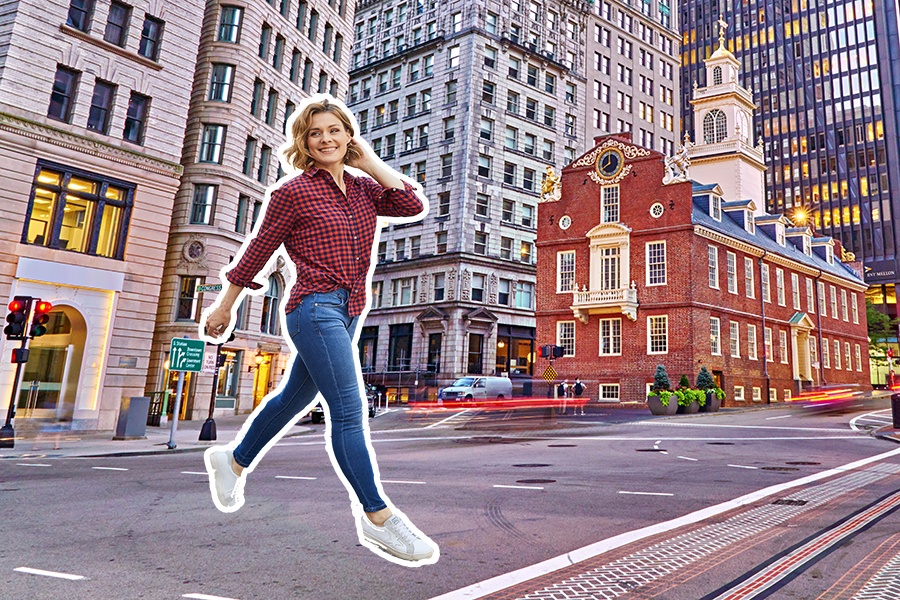 Or at least, I, like virtually everyone capable of doing so in the city of Boston, jaywalk with such regularity across our streets that I might as well enjoy it. Waiting forever for signals to change even when there is little traffic to speak of, or marching down sidewalks looking for crosswalks for no other reason than to comply with the letter of the law, is no fun at all, whereas crossing wherever I please, so long as it’s safe to do so, is a blast.

So I was distressed to learn that, not for the first time, there is a legislative push afoot to punish jaywalkers for the crime of being on a road while walking.

A bill filed earlier this year by State Rep. Colleen Garry, of Dracut, and debated in a hearing last week, is aimed at battling this supposed scourge of jaywalkers across Massachusetts. The legislation calls for escalating fines: $25 for a first offense, $50 for a second, and $100 thereafter. Fines would double for anyone caught crossing the street while looking at their phone or wearing headphones—bad news, I guess, for the roughly half of Bostonians who walk around with AirPods stuck in their ears at all times. Some of the bill’s other provisions are pretty hardcore, like banning jaywalking even in cases where a crosswalk is more than 300 feet away.

This is not the first attempt at a jaywalking crackdown. A similar, ill-fated statewide effort also emerged just a few short years ago. Marty Walsh sounded off about bikers and walkers sharing blame for road incidents in 2014, and Tom Menino reportedly considered trying to jack up jaywalking fines in 2010. So why does this pro-car, anti-pedestrian concept keep rearing its head over and over?

The absurdity of the current state of affairs probably has something to do with it. Because in practice, there really isn’t much of a jaywalking law to speak of in Massachusetts, though one is on the books. Fines for jaywalking right now stand at the hilarious sum of $1 for the first, second, and third offenses. It skyrockets to $2 after that. Police are not particularly interested in enforcing the law, by which I mean they don’t enforce it at all. A few years ago, the Boston Globe’s Dugan Arnett spent the day illegally traipsing across Boston streets, often in full view of police officers, practically begging for a jaywalking ticket (in fact, at one point actually begging for one of the rare citations). BPD refused to intervene.

But this, it must be said, is a good thing. Not because it’s smart to wander aimlessly across Tremont Street (it isn’t), but because no reasonable city would spend its time and resources harassing jaywalkers.

We’ve come a long way since the early 20th Century, when the auto industry invented the “jaywalking” concept as a way to shift blame for collisions away from drivers and toward people with the audacity to get in their way. A century later, pedestrian activists still cringe at the mention of the word. Despite the term’s negative connotation, says WalkBoston Executive Director Stacey Beutell, places where jaywalking is commonplace are often among the city’s most welcoming corners. Take Downtown Crossing, for example, where cars, bikes, and shoppers co-mingle on shared roadways like School Street. “That’s one of those places where it’s vibrant, there’s a lot of economic activity, there’s a lot of positive community social cohesion and behavior. Those are the types of spaces that we want to create in the city,” Beutell says. “‘Jaywalking’ is a sign of a healthy and vibrant, economically vital place.”

Policing jaywalking in any serious way would promote an antiquated way of thinking about streets, just as Boston is making real progress on making them better, safer, and ultimately less beholden to the needs of people who drive. Moves like lowering the speed limit on certain streets to reduce the fatality rate in crashes, or retrofitting busy thoroughfares with protected bike lanes have helped reclaim roads for the non-vehicular. Boston’s growing love affair with concepts like a car-free Newbury Street, car-less downtowns, and parklets aplenty are further hopeful signs of what’s to come if we put our minds to it. We’ve seen what happens when you punt vehicles out of the way and put people first, and we like it.

So it’s in Boston’s best interest to not only reject this latest attempt to tilt the scale toward cars, but to go even further. Keep jaywalking, listen to music while you do so if you choose, and perhaps even fight to simply wipe jaywalking statutes off the books (as Virginia did this year). And yes, keep your head on a swivel—while a $1 ticket does not sting, toppling over the hood of an errant Tesla does. But wherever possible, we should be working to create more places where cars are more accountable to people, not the other way around.

Power to the jaywalkers, forever.