Michelle Wu Will Be the Next Mayor of Boston

Annissa Essaibi George has conceded in the race. 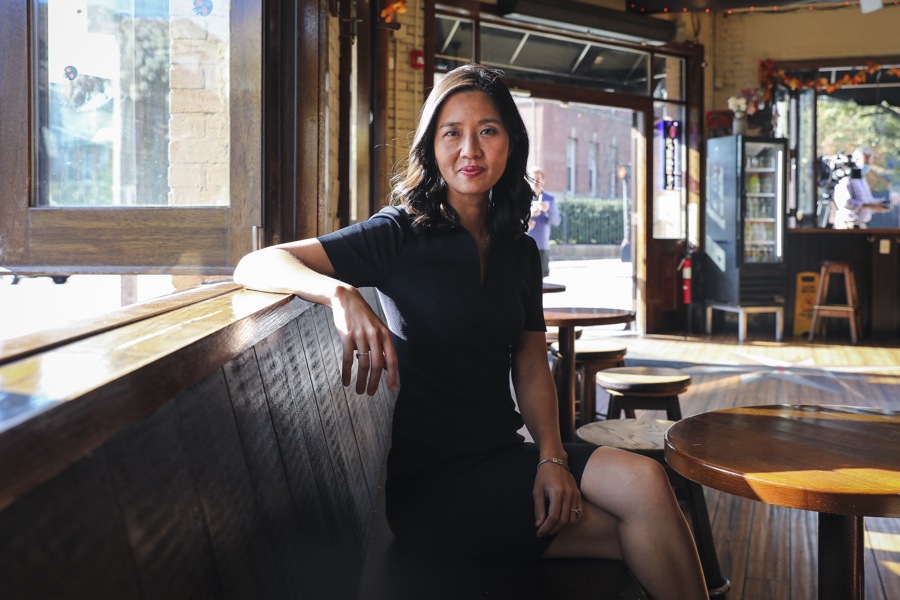 And so a decidedly new era begins at City Hall. Michelle Wu, whose promises of transformational change have endeared her to progressives dissatisfied with the city’s status quo, will be the next mayor of Boston. She will be the first woman and the first person of color picked for the city’s top job.

As votes trickled in Tuesday night, Wu had a decisive lead over fellow at-large City Councilor Annissa Essaibi George in Boston’s first open mayoral race since 2013. George announced her concession in an address to supporters at Fairmont Copley Plaza at around 10:20 p.m. Official election results have not yet been released.

No matter which way the results broke, Boston was set to make history, as voters had never before elected a mayor who was not a white man. Wu’s parents emigrated from Taiwan. George has both Tunisian and Polish heritage. Acting Mayor Kim Janey, who as city council president at the time Mayor Marty Walsh left for Washington took the reins at City Hall by default, was the first woman and person of color to occupy the corner office. She was, however, not directly elected for the job. Her effort to run for mayor officially was cut short by a fourth-place finish in the preliminary election in September.

Wu, 36, appealed to change-oriented Bostonians by pitching ideas like fare-free public transit, the return of rent control, and an overhaul of housing that would include abolishing the powerful BPDA. Of the two finalist candidates, Wu was also more inclined to rein in the Boston Police: While she has said she does not want to “defund” the department, she has supported efforts that include removing cops from schools and eliminating the city’s troubled gang database.

Her decisive victory may put to rest this year’s interminable debate over whether voters would accept a mayor who was not born in the city. Wu hails from Chicago, while George was born and raised in Dorchester. The mayor-to-be moved here in 2003 to study at Harvard, where she was a protegé of then-professor and now-U.S. Sen. Elizabeth Warren. After moving back to her native city in 2007 to care for her ailing mother,and help run her family’s quirky literary-themed tea shop, she returned to Boston in 2009. She and her husband Conor Pewarski now raise their two sons in Roslindale.

She was elected to the City Council in 2013 at age 28, later becoming the first woman of color to serve as City Council president. Her profile has risen significantly over those years, as she advocated a vision for Boston that challenged the status quo in ways few other elected officials had. It has clearly endeared her to voters: She finished as the top vote-getter in each of the last two at-large races.

Carrying out her agenda will in many cases require buy-in from other elected officials. She cannot waive fares on the MBTA, place new restrictions on what landlords can charge renters, or fully unwind the BPDA in the way she has envisioned without approval from Beacon Hill. Whether her administration can handle those challenges, and marshal enough support to overcome the governor’s veto, remains to be seen.

Wu has never hidden her ambitions. The fact that she was planning to run against Mayor Marty Walsh was the worst-kept secret in Boston last year. She announced her campaign for mayor in September of 2020, long before Walsh’s move to Washington to serve in President Joe Biden’s cabinet.

When she takes office November 16, she will immediately inherit several overlapping challenges in Boston, among them navigating the complexities of this stage of the pandemic, including fraught efforts to reach those in Boston who are still unvaccinated. She will now also own the city’s response to an opioid and homelessness crisis that has manifested this year in a tent encampment at the area now known as Mass. and Cass. Her predecessor, acting Mayor Janey, has ramped up efforts to address the situation in recent days with a controversial street-clearing initiative. What to do next will be Wu’s call, among the first of many.