Blink! and the 80-Foot-Tree Aren’t Coming Back to Faneuil Hall This Year

But some other cheery decorations are in the works. 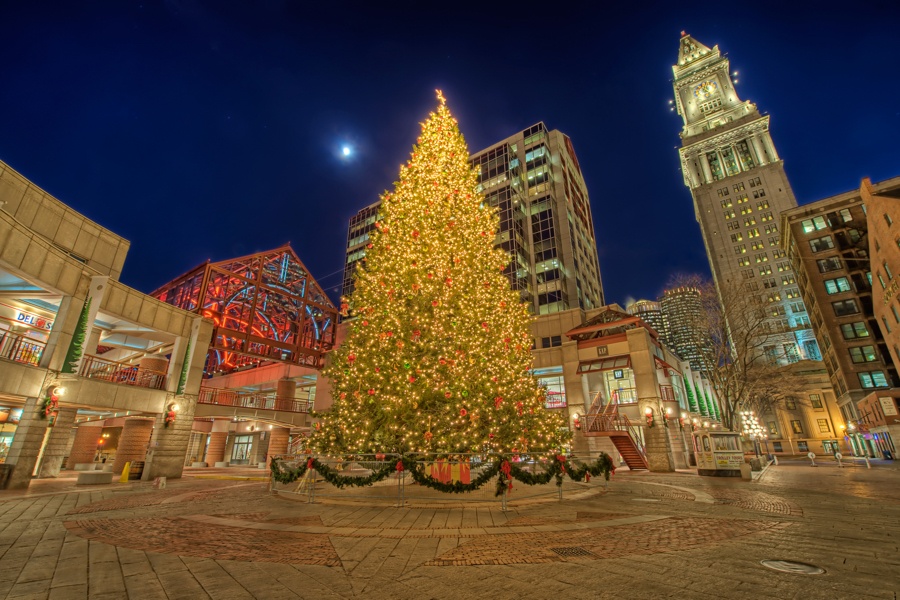 For the second year in a row, shoppers headed to Faneuil Hall will not be greeted by a giant outdoor holiday tree or musical light show. Both the tree—an 80-foot-tall spruce typically found in the round courtyard near the Greenway—and a display of twinkling lights synchronized with holiday music, called Blink!, have been called off.

Instead, O’Malley says a 20-foot-tall tree will be installed inside of the Quincy Market rotunda, with holiday décor inside and outside the market. The tree is set to be installed the day before Thanksgiving, and a small lighting ceremony is planned for the week after the holiday. Faneuil will also welcome a new kid-friendly exhibit featuring animatronic dinosaurs, called Dino Safari, on Friday.

“We’re kind of focused on Quincy Market for this holiday season,” O’Malley says. “It’s not going to be what people are used to, but it will be exciting.”

In the years since it first debuted in 2012, both the lit-up tree and Blink! had become holiday traditions at the popular shopping destination. A lighting ceremony, complete with celebrity guests and a live-broadcast WBZ Holiday Spectacular, drew crowds of thousands. Each year the landmark was draped in hundreds of thousands of LED lights running up and down Quincy Market that blinked and changed color as Christmas music played through speakers. Putting on a show like that isn’t cheap. In 2019, Faneuil Hall Marketplace told us Blink! was its biggest marketing expense of the year.

After the 2020 hiatus, many fans had expected to see its return. But it appears that although Faneuil Hall Marketplace was game for a reboot, Marketplace Center—which is owned and operated separately, and usually pays a share of the cost for the festivities—was not. O’Malley declined to explain the specifics of the usual cost-sharing arrangement.

Gazit Horizons, a real estate investment firm that bought Marketplace Center in 2019 (and this year proposed building a retail and office tower in the space) says through a spokesperson that it opted against bringing back the festivities due to uncertainty about the safety of attracting large gatherings. However it is, the spokesperson said, open to funding the programs in future years.

Blink! fans are expressing their disappointment and sadness about the news on social media, with one writing on Facebook that it is “sad to see something so special to many families disappear.”

DesignLight, the Dover-based company that installed the Blink! lights from 2017-2019, is also disappointed. Owner Len Schnabel says DesignLight had another three-year contract with Faneuil in the works before the 2020 holiday season, but the pandemic derailed those plans. He says his company is ready to bring Blink! back next year if asked.

“It’s such an amazing attraction right in downtown,” Schnabel says. “We’re proud of what has been on Faneuil Hall for the three years that we were doing it, and we’re hoping for another three-year contract. I would love to see that start for 2022.”

So don’t despair: O’Malley says Blink! is not gone for good, and that he’s hoping next year brings better tidings for the Faneuil tradition.

“It’s too special for the city,” he says.