Anyone seeking to make a statement here should consider this option. 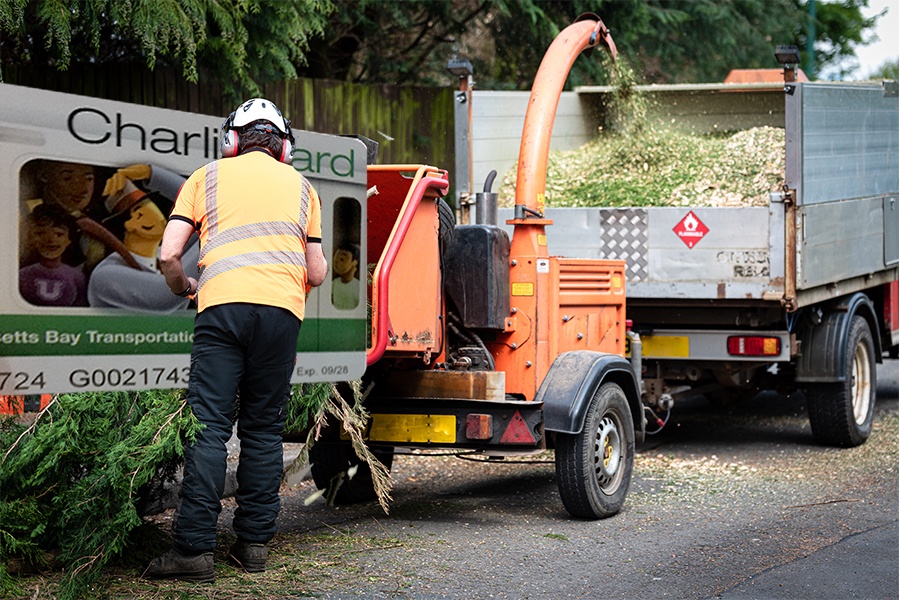 Every politician and activist group worth their weight knows the value of a good visual. Take, for example, the rush in recent days to promote pro-commuter policies by being seen riding the MBTA. Newly minted Mayor Michelle Wu has shared photos of herself doing so, after saying she’d commute to City Hall via public transit rather than in the large SUVs favored by her predecessors. Even City Councilor Michael Flaherty, whose admissions about his family’s driving habits and commentary on bus stops earned him the nickname “Five Car Flaherty,” shared pictures of himself riding the Red Line.

But there are other, even punchier and more evocative ways to make a point. Just look at what they’re doing out west.

Look, specifically, at this incredible image:

What you’re seeing here are the contents of a monopoly board, which have been jammed into a wood chipper, erupting into a dumpster. Flecks of cardboard and colorful fake money soar through the air, past a man who is holding the trash receptacle open and is sporting a half grin.

So what exactly is going on here? The scene unfolding in the picture—for which we can thank Allan Jung from the Telegram & Gazette—is the handiwork of a beloved dive bar called Ralph’s Tavern. The wood chipper spectacle comes the day that much of the rest of the city was celebrating the debut of a Worcester edition of the popular Hasbro game. But not Ralph’s. That’s because the bar has a gripe with the company that created the special-edition game over its pay-to-play business practices. You can read more about the debacle here, but essentially Ralph’s owner Scot Bove says he believed spots on the board would be decided by a voting process, and went to extreme lengths to win (including a much-publicized decision to briefly accept Monopoly money at the bar). So he was disheartened to then learn that participating businesses had to pay for inclusion.

Not content to let this apparent injustice stand, and clearly skilled at the art of the publicity stunt, Bove decided the best way to remind his city about Ralph’s Tavern’s dissatisfaction was to absolutely obliterate a monopoly board on camera. Additionally, the Telegram says Ralph’s also dressed someone up in a Monopoly costume, complete with a black eye, and led the crowd in a rendition of this song, sung to the tune of “Love Stinks.”

We cast a vote, what a joke

They just want money, while we’re all broke,

They’re on their boats, they’re having drinks

All we can say is – Monopoly stinks.

So long story short, I think Boston ought to look to our Central Mass. neighbors for inspiration on this one. Few objects drive the point home more succinctly, and less subtly, than a wood chipper. There’s a reason the Coen Brothers featured one in that scene from Fargo that everyone remembers. It makes an impression.

How exactly a wood chipper could work for political ends out here in Boston is easy to imagine. You could, for instance, make an eye-catching statement about why we can and should end the practice of collecting fares on the MBTA for good by heaving a novelty-check sized CharlieCard into a wood chipper’s ferocious maw (pictured above for reference). Perhaps if the Wu administration makes good on its pledge to dismantle the BPDA, it could ceremoniously shred a print-out of the agency’s five-year-old branding. If and when the state finally repeals its anti-happy hour law, here’s a free tip to anyone trying to commemorate the occasion: grab yourself a copy of 204 MCR 4.00, and mulch the thing.

This would not be expensive. Per a listing on a local rental agency’s website, the going rate for an eight-horsepower Bearcat wood chipper is $125 a day. It’s cheap! It’s easy! It’s evocatively violent in a way that (given the proper safety precautions like protective eyewear) hurts no one.

I simply can’t believe no one else is doing this. So here’s a big shoutout to Worcester for leading the way.

This article has been updated. The name of the bar that shredded the Monopoly board is Ralph’s Tavern, not Ralph’s Diner.