Meet the Square One Mall Goth, the Instagram Sage of the North Shore

An irreverent hot tub repairman from Everett is poking fun at the region's iconic places and characters—before they're gone. 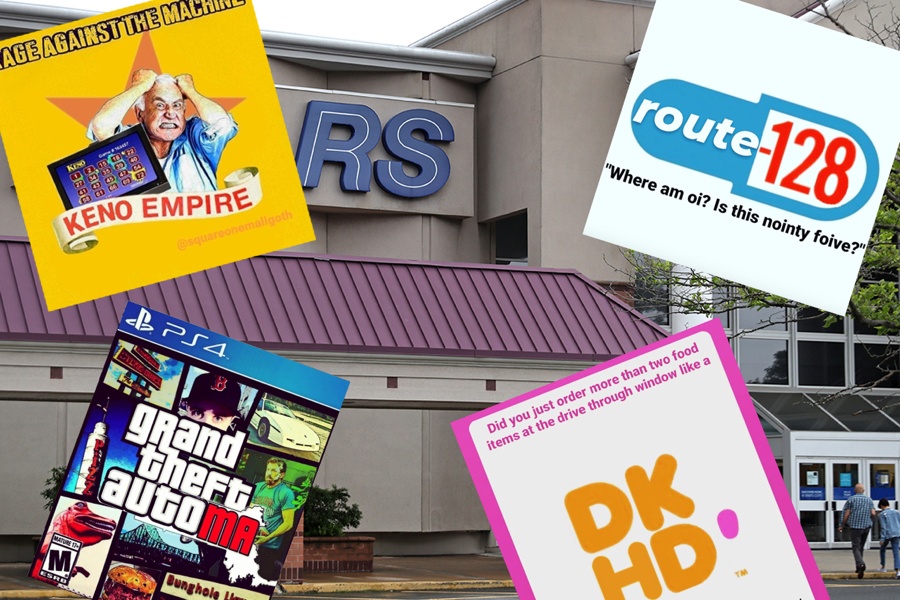 Many have tried, and failed, to fully capture the spirit of Greater Boston in works of fiction, documentaries, books, and folklore. As real Bostonians actually know, the Boston vibe is not a monolith. It’s often a patchwork of regional peculiarities, with obsessions and cultural touchstones understood fully only by those who are deeply invested in them.

People like the Square One Mall Goth, a small but growing account on Instagram dedicated to mocking, and celebrating, the North Shore with irreverent fervor—cracking jokes about everything from its various trashy stereotypes to its fixation on gaudy destinations like its behemoth roadside cacti, and its beloved Kowloon.

I’ve been following this account for a couple months now, and I can’t keep it to myself any longer.

Scroll through it for a pitch-perfect, often crude, and frequently hilarious send-up of what it’s actually like to grow up on the North Shore.

The imagineer behind this collection of extremely hyperlocal memes asked me not to reveal his true identity, but I can report that he is a 37-year-old hot tub repairman and a married father of two from Everett. And yes, as his Instagram handle suggests, he grew up spending his weekends carpooling to the Square One Mall in Saugus.

He says he started the account two years ago, after deciding all the pristine jokes he was sending to buddies were too good to remain only in a group chat.

“I used to just send them to my cousins or my coworkers. And after a night out at Pearl Street Station in Malden one of my cousins was like, ‘Hey, man, you should start a meme account on Instagram and post this stuff,” he says. “It’s funny, when I first started it I didn’t get a single like that wasn’t from a first cousin for, like, a year and a half. And then like, one day, it just exploded.”

His first hit, naturally, involved the iconic orange T-Rex from a decommissioned Route One Miniature Golf course (there is something that happens to your DNA if you grow up in the North Shore that makes you obsessed with that thing) and his follower count has been steadily rising ever since.

With some of his posts, you can imagine the target of the day—say, the “roofer from Woburn” who smokes Mustangs and has three DUIs, or the townie mom from Tewksbury who names her kids “shit like Colby, Asher, or Horseleigh”—getting pissed off. But he says he rarely hears angry reactions. It all comes from a place of love, he says, which people can recognize.

“I have a great reverence for where I grew up. Even when I poke fun at people’s parents or, you know, how they buy lottery tickets, or how they block traffic at Dunkin’ Donuts, they understand that I’m not someone from the outside hating in. I’m from there,” he says. “Those are my cousins and my aunts and uncles and my friends who I’m poking fun at.”

In some ways, it’s a nostalgia account, designed to conjure memories for fellow elder millennials who grew up in the neon glow of Route 1. He says a lot of his ideas pop into his head while taking mental strolls down memory lane: He’ll think back to how his mom used to take him to Phantom Gourmet food events back in the day, and then in no time he’s writing jokes about doing a “Lady and the Tramp a hot dog at the Hot Dog Safari.”

Others are crowd-sourced. Fans love sending him messages with tips—and some, for some reason, love sending him pictures from inside his namesake shopping center. “At least once a week, sometimes every day, I wake up to, like, a DM of someone be like, ‘Look, here’s the closed down Lady’s Secret storefront from the Square One Mall I saw this morning,'” he says. “I get that all the time.”

And if he ever needs to juice the numbers, he says, all he has to do is share a meme that incorporates that damned dinosaur.

His fixation on the mall is fitting, considering how much malls around the country have struggled, deteriorated, and in many cases been wiped away by the march of time. He worries something similar might be in store for his beloved North Shore, which has seen rents and home prices keep ticking upward as Bostonians looking for cheaper housing continue to migrate into his turf. So concerns about gentrification are a major theme in his posts.

But at the same time, he devotes a lot of his firepower to skewering the townies who are most resistant to outsiders, and to change. “I understand the heartache of watching your old neighborhood diner get closed down and your movie theater get replaced by an Amazon warehouse. And your neighbors die and their kids move away,” he says. “But there’s a negative side of townie-ism, of resenting the people who now live in the neighborhood that you grew up in who are different from you. And I’m not really here for that.”

All he asks, really, is that no one try to capture the vibe of his community in another cheesy boutique hotel.

Because that’s not what the living in the North Shore is about. It is, through the lens of the Square One Mall Goth, about bringing your ferret to the park, bumming a square at the jobsite, sending girls pictures of your pit bull and squat rack, and buying a pot leaf T-shirt at Spencer’s gifts.