Novel advice for how to fix dating in Brookline. 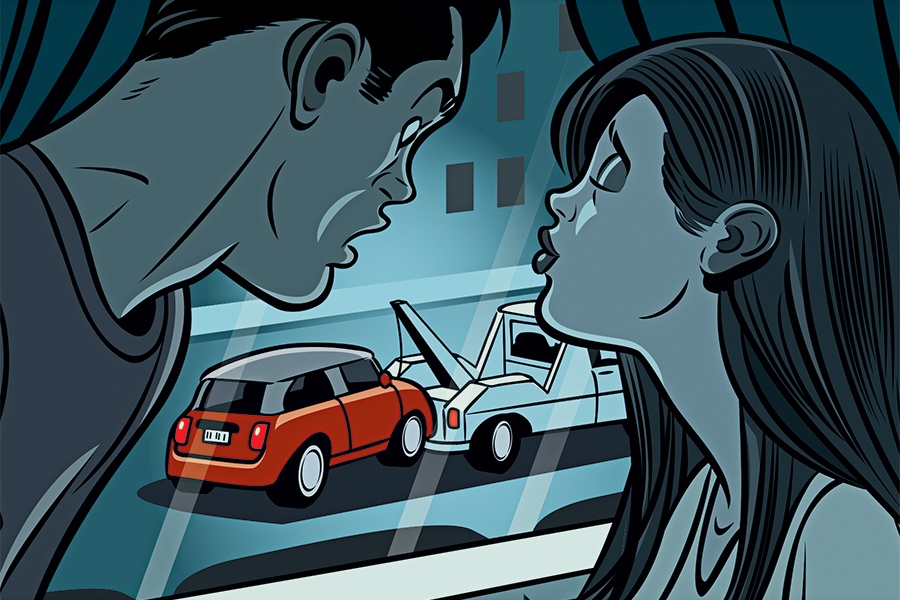 I’m 54, have two kids, a raggedly lawn, and just celebrated my 11th wedding anniversary, so of course, I have dating advice.

But wait. Don’t go just yet. It’s good stuff and I’d hate for it to go to waste:

No. 3. Stop trying to get her to watch The Wolf of Wall Street.

But my best nugget is actually for the parents, whose greatest wish is that their kids will it’s-about-time finally get married. All of your sincere concern (intrusion), genuine questions (nosiness), and well-meaning setups (do you even know me?) haven’t worked, and will not work, because an obstacle remains.

My advice? Take all of your energy, political clout, and organizing skill, forget about all you’ve done, and focus on one goal: Change the parking laws in Brookline.

Yeah, Brookline, but I’ll come back to that.

In general, parking is the greatest impediment to people getting together. Yes, attraction and compatibility matter, but not until you find a spot. Here’s the general challenge of dating: You want to meet someone cool. Well, the cool people around here live where there’s no parking. The cooler the place, the less parking there is. Cambridge? Not much. South End? Oy. Beacon Hill? Always gave myself an extra hour if I didn’t avoid it altogether.

And you want to date the people in those cool places. Guess what? Same list, plus throw in Charlestown, the Back Bay, and every square in Somerville. All totaled, there are four visitor’s parking spaces.

If you’re still not buying my premise, I’ll put it this way: Show me a single person with ample parking and I’ll say that you’re going to Framingham for the evening, and there ain’t nothing sexy about Route 9 West. Sorry, 508.

Waiting for Uber is like shaving: the bigger the occasion, the more something will go wrong.

Now, I’ll confess that I dated pre-Uber. I see how it would clear up some of these problems when two people are meeting at a specific place. But it’s not the panacea you might think. You’re still waiting for someone else to come and get you, and it’s like shaving: The bigger the occasion, the more something will go wrong, so if Uber had existed when I was going out, I probably wouldn’t have used it. Personally, I wanted to control as much as I could for the night. I wanted my music to keep me calm-ish. I also liked the challenge of beating the city, because while I was a pretty “eh” dater, I’m a rock-star parker. I could find spots, swerve into them, and do it on Mass. Ave. without getting the state salute.

Still, it wasn’t without stress. I had to find a spot on the street—garage equals failure—and I also wanted it to be reasonably close. Otherwise, I’d be running to make it on time, messing up what I had left of my hair, and sweating through my lucky shirt that I certainly didn’t believe in. Plus, that space had to be good for as long as I needed it, because nothing breaks up a good date like excusing yourself to feed a meter, with the possible exception of having to ask the bartender for quarters.

First dates don’t need the extra pressure, and reducing the parking burden is the place to start. Making more spaces available would seem obvious, but my solution is smaller, smarter, less expensive, and better.

Now, back to Brookline and its parking laws, which have ruined more budding relationships than cats. It might not seem so, since Brookline is a good town and offers all the things that would lure many single people: coffee shops, a killer bookstore, and burritos.

And then it’s the worst, because you can’t be on the streets for longer than an hour anymore.

Why exactly is this the problem I make it out to be? Because Brookline was my personal nemesis. I spent a lot of dating time there because I’m Jewish and, I hope this doesn’t sound wrong, there are a lot of single Jewish women in that town. From my experiential research, every single woman actually lives there at some point, and because of the proximity to Boston and the Green Line, none of them see any reason to own a car.

The trouble is, at no point does any single guy live in Brookline. Like ever.

Yes, this is a straight, white guy talking. I don’t pretend otherwise, but it’s my wheelhouse, and if I’m still not being clear, I’ll lay it out delicately: On the one side, all of the single women are in Brookline without cars. On the other, all of their dates have to come into Brookline with their cars in order to pick them up.

No issue yet. The couple can go out and have a nice time getting acquainted. If it’s a second or third date, they might want to continue the evening in private, in a place that might have a couch, maybe a bed—not for anything tawdry—just to relax, talk, talk some more, because that’s still what people do.

Then sure, possibly they’re going to make out in a healthy, body-affirming way, because that’s also what people still do. As the guy, you think it’s going well; then you catch the briefest glance at the clock, see that the numbers read 1:47 a.m., and think, I’m gonna get towed.

The night is now kaput. You’re doing math and wondering how you’re going to make it back home since your date doesn’t own a car and the Green Line doesn’t run everywhere and it runs nowhere after 1 a.m. The magic is gone, never to return.

Oh, and Uber again. You think that would be the solution? Maybe, but if you need to leave, like soon, there are few things more awkward than waiting in someone’s foyer, along with all the other daters, hoping that this Mazda is your Mazda.

This happens over and over. And that, parents, is why your beautiful catch of a child is still single. The question is: Why is Brookline so mean to young professionals? The town laws don’t target any group, but when the website says no one can park on the street for longer than one hour between 2 a.m. and 6 a.m., who’s really getting hurt, 14-year-olds?

I suppose, with how the law is written, a make-out session could last until 2:59 a.m. without incident. That would have been good to know when I was in the game, and that’s on me for not knowing. Then again, back in 1997, Google was still a year away and I wasn’t going into Town Hall to read the bylaws before heading over to the Golden Temple. Besides, while those extra 59 minutes would have been enjoyable, the central problem remains: The night still has to end.

Now, in the name of fairness, Brookline has always provided some help. There are 267 spaces spread throughout seven lots in town. For $10, one can be yours until 8 a.m. It’s something I heard about back in my day, but never pursued. Even if the info had been online in 2003, would it have mattered?

For one, you had to go to the police station to get the permit before going back to the lot, says Todd Kirrane, the town’s transportation administrator. Nothing boosts a good date more than a visit with law enforcement. Plus, and this is bigger, it would have just created another problem, because no one in the early days of dating could park in one of these “I guess I’m staying” spaces beforehand. The presumptuousness would have ended the date right then and there.

You see, fooling around is something of an art form. It unfolds easily, both players not rushing but following each other. It works almost under the guise that, as soon as you enter whatever apartment, nothing will happen because it’s, “Hey, we’re just talking. Now we’re giving each other hand massages but we’re still just talking. Now we’re not talking as much. And now, yeah, I guess lying down would be more comfortable. And lookee here, kissing.”

It’s beautiful in its improvisational-jazz nature, but you need to be parked on the street for all of that to happen, and then you’re still facing The Clock Strikes 2. Sure, you could leave, go park in one of the safe harbors, and return. But everyone knows, in the first month of dating, when the making out is the best, you can’t do that and pick up where you left off.

Brookline always felt kind of evil in this way. I know deep down it wasn’t, but it was hard to tell by its actions when the lights went down and Bob Schneider went on. (Tip No. 4: Know who Bob Schneider is.) I’ve always carried this pain and a fervent hope that Brookline would open its heart and not be a cold, harsh place, but one where single people can find true love and move out so new single people can move in, landlords can up the rent, and the process can start over again.

Kirrane says it’s gotten easier. The need to go to the police station stopped around 2010. Instead, you can pay right at the lot for overnight parking. That’s one check for love. You can also get a guest permit from his office if your love interest lives more than a quarter mile away from an overnight lot, just by You, the Non-Brookline Resident showing up, filling out an application, and paying the $10. Another check for love.

If that’s too much, the town also has a mobile app, which can help later in the evening. Say you’ve parked in an overnight spot after the meters shut off at 8 p.m., but well before any thought of staying late is on the radar. And say, just for kicks, that things during the indoor portion of your date have progressed in a respectful, disheveled-clothes kind of way, where it’s getting late, and you could be facing a ticket. You can pull up that mobile app and punch in your parking space number. (Tip No. 5: Remember your parking space number.) And then you sew up your overnight pass, all without getting up.

I like the ease, but with that app and buying a permit on your own, there’s still a “You did what?” kind of forwardness. Maybe that’s okay, though. Maybe it always was, and it was me who had a problem with directness, which explains why I was 41 and had my mother as my emergency contact. But I still think the efficiency will stop the rhythm of the night, and a lower-tech approach might be better.

I say give out little stickers that are good for three no-hassle months of parking to determine whether the relationship is worth pursuing. After that point, the couple knows where they stand, or at least should. Staying over is no longer a mystery, and if you haven’t gotten a guest permit or you don’t have any signal, you go to the all-time Plan B: Get up, drive over to Brighton, park, and walk back.

Do that, dear parents, and you can start ordering the invitations and breaking glasses.

And then Framingham comes back into the mix.