It is Christmas Eve for the forecasters of Southern New England. Deck the halls! 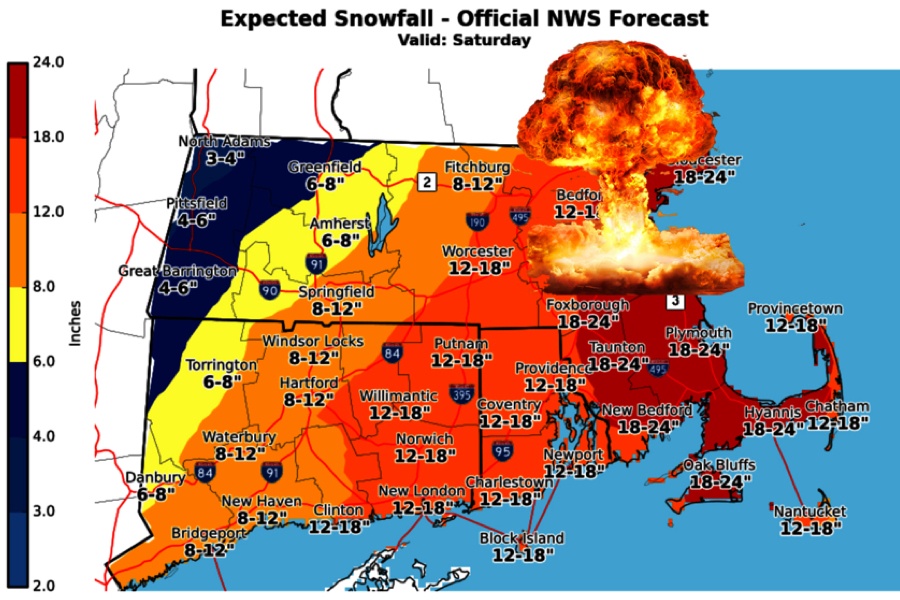 You feel that electricity in the air? The sense of foreboding, the deliciously piquant mortal terror washing over the city of Boston with each passing moment as the BLIZZARD OF THE CENTURY draws nearer?

What by all available evidence will be a snowstorm for the history books is careening toward us, and if you’ve somehow managed not to hear about this fact, Eric Fisher will gladly arrange for a SWAT team to smash through your living room window and describe it to you in great detail upon request.

Folks, in a word, it’s showtime. Current forecasts are calling for as many as two feet or more of snow to begin dumping atop all of our heads, not just “winter storm” but blizzard warnings abound, and by some measures it seems possible we’ll get more snow in Boston than ever in recorded history. And, needless to say, the meteorologists of Southern New England have never felt more alive.

[10:15 AM Friday] A **Blizzard Warning** has been expanded west to the I-495/I-95 corridor in Massachusetts and Rhode Island. Widespread snow accumulations of 18-24″+ are expected along with wind gusts of 40-60+ mph and visibilities of 1/4 mi or less. pic.twitter.com/5hm1LZTUFt

This approaching nor’easter could bring a historic snow & wind punch to Massachusetts. We think we’re all reacting to @HarveyWCVB‘s snowfall projection the way #TheOffice would. https://t.co/vdRbg8r847 pic.twitter.com/zEIejccXBd

When Harvey Leonard needs an assist from the histrionics of Michael Scott, you know it’s serious.

This is perhaps the highest snowfall potential totals map I have ever made. Banding most likely over southeastern MA, but could occur anywhere in the highest zone. Most of this falls from 7 am to 7pm Saturday, final flakes around midnight. #WeatherWisdom pic.twitter.com/fzflYLLhfe

I’ve been a professional meteorologist for almost 31 years. I studied meteorology @Cornell for 4 years before that. There have been times I’ve seen crazy numbers from model runs, but never across several models this close to the storm. I don’t even know what to make of it.

The opening scenes of Don’t Look Up have become reality.

“wicked busy morning here at the Chelsea salt pile” is one of the most New England phrases I’ve heard https://t.co/w4CpN9h2vk

As we speak, moms and dads across the Commonwealth are lamenting the life path they’ve chosen that did not result in them being professionally within eyeshot of the Chelsea salt pile at this very instant.

This checks out, I believe.

Live w/ @JimCantore in Boston before what could be a top 10 snowfall for the city, so we stocked up on cannolis pic.twitter.com/qcb5r4ZNIQ

Jim Cantore has been spotted. I repeat, Jim Cantore alert is in effect. Also spotted, the greatest hits of Snowpocalypse 2015:

Nerd tweet: You know it’s good when a dynamic cooling band shows up at 850mb because the snow is ripping so hard (SE Mass) pic.twitter.com/q2VMmErsGi

OK, man. Sounds cool! Or, to put things in terms you’ll actually understand: “UR ABOUT 2 GET BLOBBED UP”

Some other units of measurement to consider:

The latest snow map… we’re in for quite a whopper! Up to 30” of snow is possible in some parts of the state.

Coastal communities are now under a blizzard warning all day Saturday. Wind gusts could reach 70mph along the coast.

What are your essential tips for surviving a #blizzard in Boston?

Asking for a friend before the ❄️❄️❄️ gets wild…

Parallels being drawn with our pending blizzard and the Jan. 26-27th 2015 blizzard. This one could break that record (2day) snowfall of 27.4″ in Boston and crack the top 5.

Remarkable storm on the way. Buckle up. pic.twitter.com/y66dC7W7Om

Not since the advent of Keno has Massachusetts been beholding arrays of numbers with such rapture.