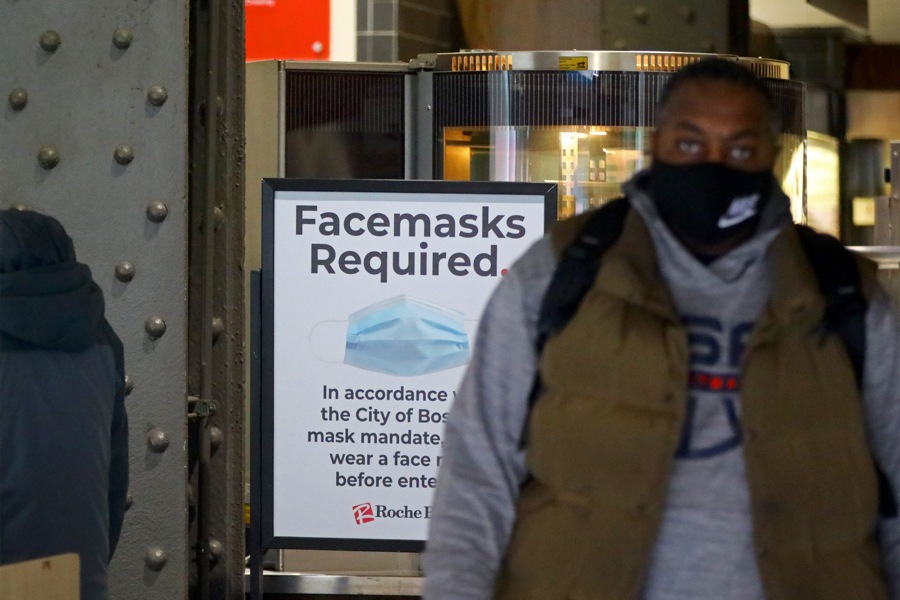 It’s been a dizzying few months in Massachusetts when it comes to rules on masks and vaccines in this stage of the pandemic. Mandates have come and gone, and in some cases never arrived at all. We’re hearing conflicting messages from city, state, and federal officials, not to mention from health experts we’ve been told to heed all along. New metrics for rolling back the rules are here, or they’re on the way. Struggling to keep up with the state of play? We don’t blame you. We’re here to help.

Whether you’re required to wear a face mask depends on where you are. When you see it on a map, it’s striking just how much variety there is when it comes to policies town-by-town and city-by-city. Boston still requires them for all public indoor spaces, as do neighbors Cambridge, Somerville, Newton, and Brookline. Some places, like Medford, Malden, and Melrose, require masks only in municipal buildings.

Everett and Waltham, meanwhile, do not have indoor mask mandates at all. Other cities in recent days have been weighing whether to join them. Salem’s Board of Health voted unanimously to end its mask and vaccine mandates on February 7, a change that took effect immediately. Worcester earlier this month voted to rescind its indoor mask mandate, which takes effect on February 18.

Masks are still mandatory statewide in certain other locations like hospitals and nursing homes, and in most forms of transportation you share with strangers, including airplanes and airports, and on all MBTA trains, buses, and platforms. Ride-sharing apps like Uber and Lyft both require that drivers and riders wear masks. Don’t expect those rules to go anywhere anytime soon—you may not want to relax your policy of stuffing spare masks into coat pockets.

What the state says

The state Department of Public Health has relaxed its masking guidance, saying this week that people who are unvaccinated, or who have certain health conditions or compromised immune systems, or live with people who are at higher risk, should wear masks while sharing indoor spaces with other people outside their homes. Earlier, when the Omicron surge was heating up late last year, DPH advised all people, regardless of health or vaccination status, to mask up indoors.

As you certainly know by now, Boston opted to make vaccine checks mandatory at indoor venues like restaurants and gyms in January. Brookline did the same thing. (Interestingly, Brookline’s vax mandate applies to restaurants’ outdoor patios, while Boston’s does not). Other cities and towns considered following in Boston’s footsteps—among them Arlington, Cambridge, and Somerville—but didn’t, although lots and lots of business owners have enacted their own vaccine rules. Salem had a short-lived indoor vaccine mandate, which it rescinded on February 8. Your best bet is probably to still make sure you’ve got a photo of your vax card handy when going out and about in the Boston area, even if the town you’re in doesn’t have an explicit vax mandate policy.

Meanwhile, Boston is nearing the next stage of its vaccine mandate policy—per the city’s B Together plan, kids 12 and older will need to be fully vaccinated to enter those places, too, beginning February 15. Kids ages 5-11 will need to have at least one dose by March 1, and two doses by May 1.

Things could be changing pretty soon, though, as officials are outlining the metrics they’d like to see before phasing out mandates. In Boston, the B Together plan calls for the mandate to end when the following criteria are met:

At the rate things are going, that might be right around the corner. By February 15, ICU bed capacity had already dropped to 90 percent, there were 278 hospitalizations a day, and the community positivity rate was at 5.4 percent. Mayor Wu said this week that it’s possible we could get into the sweet spot “in the next few days or so.” Wu has cautioned, however, that if those numbers tick up again, the mandates could return all over again.

A statewide mask mandate in schools is set to end February 28, but cities and towns are free to keep them in place if they so choose, and many of them are doing just that. Mayor Wu, for one, is keeping BPS’ mask mandate for now. So are Chelsea and Northampton. Private parochial schools in Boston have said they will not keep mask mandates in place past that date.

Dozens of Massachusetts schools are already mask-free. As of February 8, 42 of them were allowed to drop their mandates under a state program that allowed schools to qualify for an exemption if they had high vaccination rates. Masks will still be required on buses statewide, even if they’re not mandatory in classrooms.

As for vax mandates, school staff in Boston right now need to be vaccinated, but a new agreement struck with the city will allow unvaccinated teachers back into the classroom if case counts are low, and they agree to take COVID tests twice weekly.

What the CDC is saying

Even though lots of states have been dropping their school mask mandates, the CDC thinks it’s too soon to take that step, and is sticking with its guidance that kids stay masked in schools.

The State House, closed to the public for nearly two years, is finally reopening on February 22. It had quite a run with its strict no-people policy, and was closed for longer than any other state’s capital. You’ll have to wear a mask to drop by. You’ll also need either proof of vaccination or a negative test taken no more than a day in advance.