Please Don’t Put a Mask in the Boston Time Capsule

We're better than this. 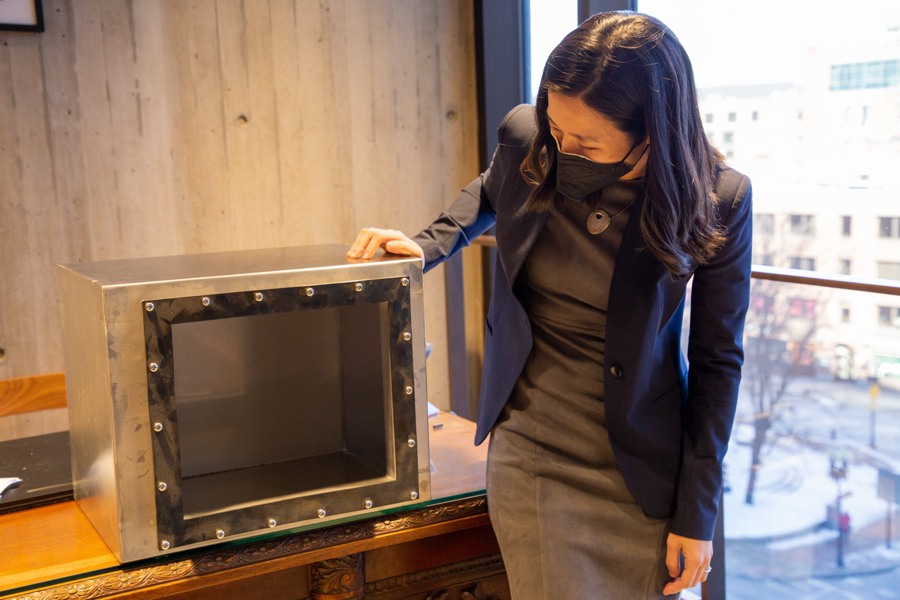 I’m a sucker for time capsules. How can you not be? Burying a treasure chest underground, filled with whatever you so choose, to be unearthed and ogled by future generations? Hell yeah, man!

So I allowed myself to get excited about the news that yet another little time machine is on deck for Boston, this time underneath the new City Hall Plaza.

As City Hall Plaza renovations move along, we’re getting ready to bury a time capsule in early March!

We have room for a few small items to show future generations—reply with your suggestions! ⬇️ pic.twitter.com/y3TAFoGuKJ

For about one second, that is, until it dawned on me: They’re gonna try to put a mask in there, aren’t they?

As part of her announcement of the big event, Mayor Wu put the call out for suggestions on what should be stuffed in the (uncommonly large?) time capsule. And wouldn’t you know it, as evidenced by the replies to her tweet, a bunch of you are just dying to put an N95 in that thing! Maybe, the suggestions suggest, one with a Celtics logo on it, or (barf) one signed by healthcare workers, or one packaged up with hand sanitizer and a Binax test. Yeesh!

Look, this is not a complaint about masking. Wear masks where you’re supposed to, alright? I wore a mask to Dunkin’ Donuts like five minutes ago. But I can’t stress enough that putting PPE in there to the exclusion of other cooler and more interesting artifacts of life in 2022 will be viewed by future generations as boring, irritating, tacky, and deeply uncool. Besides, are we really worried that anyone is going to forget that there was an ongoing pandemic in this era?

Sure, it’s a deeply recognizable totem for this particular moment. It is definitely the case that for several years wearing a well-fitting face covering at the grocery store was the right and noble thing to do. It’s true that kind-hearted people around the Commonwealth sewed thousands of them for their neighbors, which is nice, and that masks emerged in public life these past two years as symbols of solidarity: Here was a mask stretched over the snout of the Museum of Science T-Rex, or up there on the Lego giraffe in Assembly Square.

But I am telling you, nobody is gonna want to hear about this shit in 100 years. We do not need to conjure memories of people having nervous breakdowns about being asked to wear a mask for like one minute at the Kowloon, or of being trapped with Maskholes on the Green Line, or of the interminable fracas over kids masking up in schools. The coronavirus mask debate was not our finest moment as a people, all things considered. Feel free to leave it out of the nice box.

I’m sure someone, somewhere, thinks it’d be funny to put a roll of toilet paper in there, too. Remember the toilet paper shortage lol, they will ask? No, honestly, I don’t! And I never want to talk about toilet paper with you losers ever again!

We can do better than this. We must.

There are challenges to crafting a perfect time capsule, of course. For one thing, we just did this in 2014, back when the city removed and replaced one in the Old State House. In that one, we put:

Bigger picture, it’s hard to find physical objects that truly capture the 2020s zeitgeist, which is right now consumed with non-fungible cartoons, a new type of goggle-based Facebook, and finding ways to make real money with fake money. You can’t put a Bored Ape in there, is what I’m saying.

Instead, some humble suggestions:

As for what COVID-related artifacts we might feel compelled to jam in there, perhaps we could lean into some triumphs of this era. We could, for example, take a quick victory lap by popping in a Moderna vaccine vial. Or better yet, a Biobot doo doo vial, given I’m personally convinced that examining sewage truly is the future of public health. Are these technically speaking Cambridge-based innovations? Sure, but relax.

How about a COVID test, you might ask, which is itself a modern innovation that helped us navigate the worst days of the pandemic… No! Stop it! Are you listening to yourself right now?