70 Degrees and a Winter Storm Watch? In New England, Yes

The bizarre one-two punch is par for the course up here. 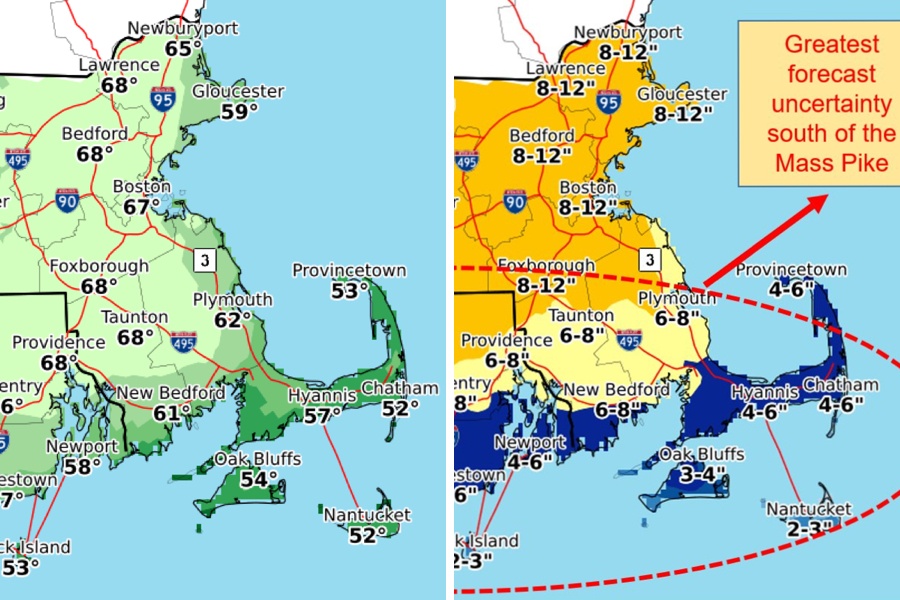 Considering the downright beautiful weather outside in Boston on Wednesday, you’d be forgiven for not looking at your phone at all. Days like these in the middle of winter call for soaking up some rays, taking long walks in the park, and giving your devices a rest for once.

But if you happened to peek at a weather app at some point during that time, you’d find a pretty astonishing combination: temperatures in the upper 60s (a record 69 degrees in Boston, and as high as 71 in Hartford) right next to a winter storm watch.

That’s because, this being New England, this brief fling with springlike conditions will be followed almost immediately by a sharp U-turn: On Friday, Boston is expected to get as much as a foot of snow.

A winter storm will bring accumulating #snow to S New England on Friday. Precipitation starts off as moderate to heavy snowfall in the pre-dawn hours, changing to wintry mix south of the Pike before tapering off Friday evening. Morning commute will be impacted. #MAwx #RIwx #CTwx pic.twitter.com/fsVVksFVQW

We won’t have to wait long for winter’s return. Overnight, temperatures are expected to plummet by as many as 40 degrees.

[4:15 pm] Incoming!!! Can you spot the cold front? Temperatures as you wake up tomorrow morning may be as much as 40 degrees colder than today’s high temperatures! #mawx #riwx #ctwx pic.twitter.com/pblURb9Qos

This devilish combo has not gone unnoticed around here. “New England” was briefly trending on Twitter Wednesday as even the most seasoned locals found themselves gawking at the abrupt change of pace this week has in store. For instance:

Only in New England can you have both of these things at the same time 🥴 pic.twitter.com/G9fOQvYzty

why do i live in new england pic.twitter.com/EFRLSDX3IW

But such is life in this part of the world. Maybe it’s time we replace the Gregorian calendar with this one, once and for all.