The GLX has arrived, and we're treating it like the party it is. 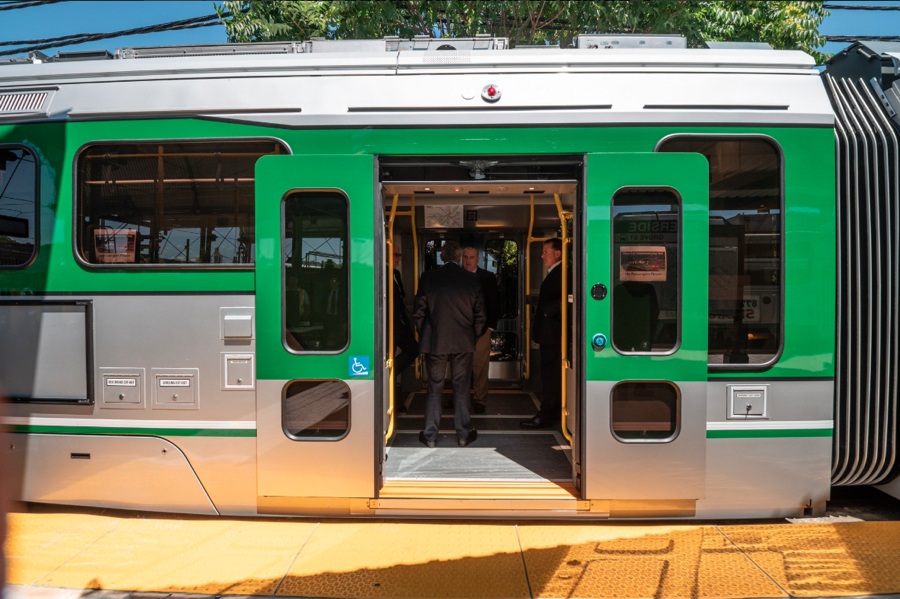 If the city’s most enthusiastic commuters had it their way, Boston would once again be swarmed with revelers decked out in green today. And no, not to keep St. Paddy’s Day rolling on Parade Hangover Day, but to herald the arrival, after all these years, of the Green Line Extension in Somerville.

Can’t you just picture it? “Charlie on the MTA” wafting out of Bronwyn. T-shirts with “Kiss me, I’m on the E branch.” A traditional MBTA breakfast (dropping a 75-percent full iced regular on the floor).

This is, after all, a big day for the T. After roughly 150 years of delays, the first of the new GLX stops has arrived.

So maybe it wasn’t Evacuation Day-level excitement, but from the looks of things, it was close, as legions of public transit heads came from all over to celebrate the occasion.

At 4:50 AM on March 21, 2022, the first train departed the new Union Square station in Somerville, marking the start of passenger service on the #GreenLineExtension. This historic #BuildingABetterT moment has been years in the making, so stay tuned as the celebrations continue. pic.twitter.com/iE5I7Vipin

Later, a crowd gathered on the platform to watch a Green Line train cruise majestically through a green ribbon.

This is how we cut ribbons at the T. With a ceremonial trolley ribbon breaking, the new Lechmere Station & entire Union Branch of the #GreenLineExtension is now open! Serving Cambridge & Somerville, this #BuildingABetterT project provides new access to reliable public transit. pic.twitter.com/nVju39uPGq

A lineup of Massachusetts political royalty were on hand this morning for a giant kickoff event, including Sens. Warren and Markey, former Gov. Deval Patrick, and others.

Right Now: @SenWarren says “Success has many mothers” and thanks @JoeCurtatone @mikecapuano and @DevalPatrick for their efforts on the Green Line Extension #wcvb pic.twitter.com/mVjIimcNqE

Full house at the GLX debut under the tracks near Lechmere pic.twitter.com/JK0UxsTj1s

Former Somerville Mayor Joe Curtatone’s energy was, as is to be expected, off the charts.

You know who else was excited? The family of WBUR reporter Sharon Brody, whose kids grew up loving trains so much they got to take an exclusive trip there before the masses.

Join us for the ride of a lifetime! The @MBTA Green Line Extension opens tomorrow & the T granted my kids and me a sneak preview. Destination Somerville, w/stops at our past.

One major damper on the celebratory atmosphere popped up not far from the festivities, where groups concerned about the massive rent spikes the project has brought and will bring for neighbors staged a demonstration and waved signs reading “don’t let the Green Line become the Gentrification Line.”

#Renters in #somervillema in front of the newly opened #MBTA #Lechemere Station call for ensuring they are not displaced or priced out as the #GLX opens. @wbznewsradio pic.twitter.com/gu8P5iWRcz

Another one, if you ask us? Due to some conflicts with the impending launch of a new fare-taking system, in order to ride the new trains, there’s a somewhat convoluted process involved that includes validating your fare by tapping your card and printing out a receipt. Considering how long we’ve waited for this day to come—and that we really ought to treat this like a big party indefinitely–maybe they could have just foregone the whole fare collection process up there for now. But we digress.

Nevertheless, happy to GLX Day to all who celebrate!