We Finally Know How Many People Left Boston during the Pandemic

In new census data, Suffolk County saw one of the largest drops in population nationwide. 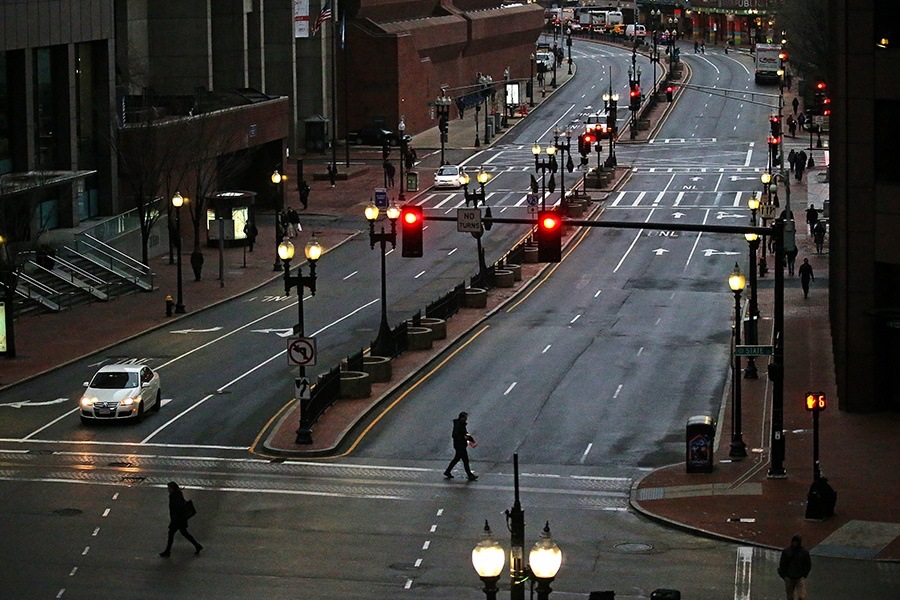 Congress Street during morning rush hour amid the early days of the pandemic. (Photo by David L. Ryan/The Boston Globe via Getty Images)

You wouldn’t know it by looking at all the signs found elsewhere, like, say, the skyrocketing Boston rents and home prices, and intensifying woes for apartment hunters. But according to a new round of census data, a whole lot of people really, truly did decamp from the city and its surrounding communities between July 2020 and July 2021.

Suffolk County, which includes Boston, Chelsea, Revere, and Winthrop, saw a notable reduction in population in those years of 3.3 percent, or 28,850 people. That figure means we saw the seventh-highest rate of population decrease in the U.S. Other areas saw much steeper declines—including New York County, where population dropped 6.9 percent, and San Francisco, where it shrunk by 6.7 percent.

Cities overall saw their numbers shrink, in part due to the birth rate falling behind the death rate, and in part because a lot of people at this point in history were looking outside urban centers for housing—pushed out by the quality-of-life changes wrought by the pandemic, or tempted by the opportunity to work from home in greener, more spacious pastures.

That said, the reporting only covers the population patterns for a moment in time, ending as the quote-unquote Vaccine Summer was just getting started here, and the situation on the ground has clearly changed quite a bit in the intervening months. You’ll recall that Boston in the deepest COVID doldrums actually saw rents go down, an unfathomable outcome in all scenarios beyond a global pandemic. That is, until they did not. Here in 2022, high rents and cutthroat competition for housing has returned with a vengeance.

Also, let’s not forget that earlier Census data showed that, between 2010 and 2020, Boston’s population ballooned by 58,000, and that the trend lines before the dreaded coronavirus showed people flocking to cities, not away from them.

So what are we to make of Suffolk County’s standout performance when it comes to people heading for the exits during that particularly fraught year? Perhaps what this tells us is that all the talk about cities like ours emptying out in the wake of COVID did, for a brief moment, live up to all the hype. But those skyrocketing rent prices certainly suggest that, as colleges left the Zoom days behind them and our restaurants and cultural hubs reopened, Boston’s desirability as a place to live quickly reverted to the mean.