After giving the world a fighting chance against COVID, where does Moderna CEO Stéphane Bancel see the pandemic—and his company—going next? 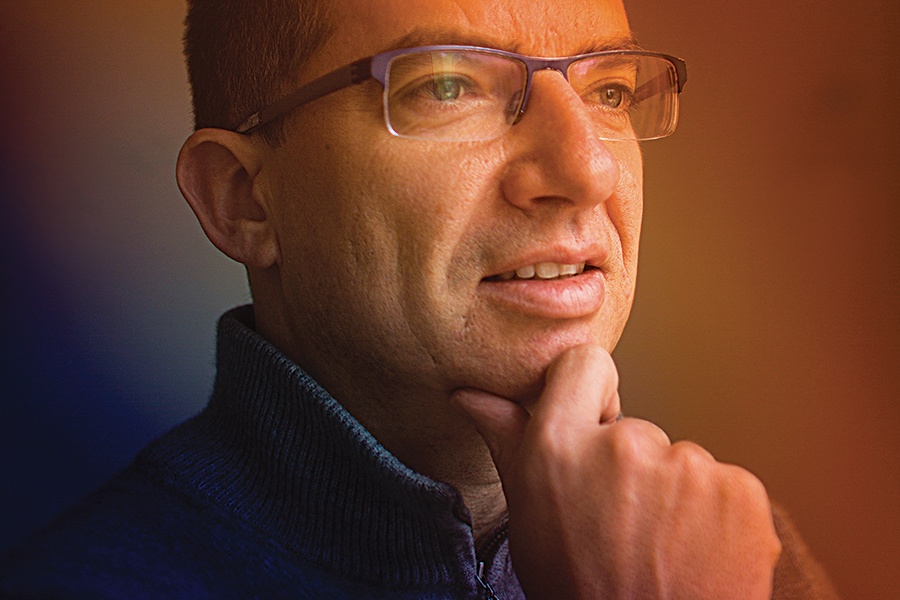 At the start of 2020, Moderna was a relatively unknown Cambridge biotech with no approved drugs to its name. Two years later, thanks in no small part to the efforts of French-born CEO Stéphane Bancel, the company’s COVID-19 vaccine has saved an untold number of lives across the world, with trials currently under way for more mRNA-based jabs, including an all-in-one that could combat flu, COVID, and other respiratory ailments with just a single shot. As Boston once again embraces life without masks, we sat down with the scientist turned billionaire businessman to talk about the future of the pandemic, competition from China, and how one conversation with his uncle changed the trajectory of his life.

You’re a scientist. In retrospect, was it a good idea for you to go to business school?

It was, because the challenge with a science business is that it’s still a business. And with science, you don’t know when things are going to work. You have to think a lot about risk.

Companies these days often have strange names that really don’t mean anything. How did you decide on Moderna?

If you look at the technology we use, it takes modified uridine to make RNA, so it’s a combination of “mod,” from modification, and RNA—Moderna. We also liked that Moderna in many languages means “modern.” This was a modern way to create drugs, where instead of making drugs in the bioreactor, you make them in someone’s body with RNA. And so because of those two things we liked it a lot.

In America, for years, we had total compliance with getting vaccinated for diseases such as smallpox and polio. Why do you think there is so much resistance today?

You know, 40 years ago, when you and I were kids, our mothers did what the pediatrician demanded. My opinion is that social media has had a very negative impact on society, because it reinforces what people want to hear. With all the misinformation that you’re highly aware of, a lot of people use sources that are not reliable and not accurate. Plus, the vaccine was certainly very politicized because the rollout happened during an election year.

There seems to be an epidemic of Alzheimer’s disease, but there’s been very little progress made in finding a cure. Do you think this will change?

I think that both the increase in life expectancy and the better care system have highlighted more cases over the years. In the past, you might have had people in remote areas of the United States or in Europe who wouldn’t have been diagnosed formally with Alzheimer’s. The progress on a cure has not been good because the central nervous system is a very, very complex machine with many, many parts that we don’t understand as a global scientific and medical community. And so, do I believe we’re going to make progress? Yes. I believe in science. I believe in human ingenuity. And I believe that as we continue to learn about how the body works, we will get to a place where we will understand the mechanism of Alzheimer’s. And once we understand it, we will be able to find the right tools to prevent it and treat it. But I think you’d be extremely arrogant, unfortunately, to give any timelines about progress.

In terms of new research, I know that drug, pharmaceutical, and biotech companies spend billions developing things with no guarantee that they’re going to work or be approved. How do you continue to innovate with such high stakes?

We as a society need to have taxpayer dollars going to academic institutions to push the boundaries of basic research. And then we need to find the right public-private partnership when it’s very risky, like we have done in the past. We have a Zika vaccine that’s in Phase 2, working with the U.S. government. And it’s a good thing, because we’re making the technology available for free. I have no idea when the next outbreak might happen, but what I know is there’s going to be another Zika outbreak. And when it happens, the world is going to be thankful that the vaccine was approved, so we don’t go back to the painful process we have been through with SARS-CoV-2. 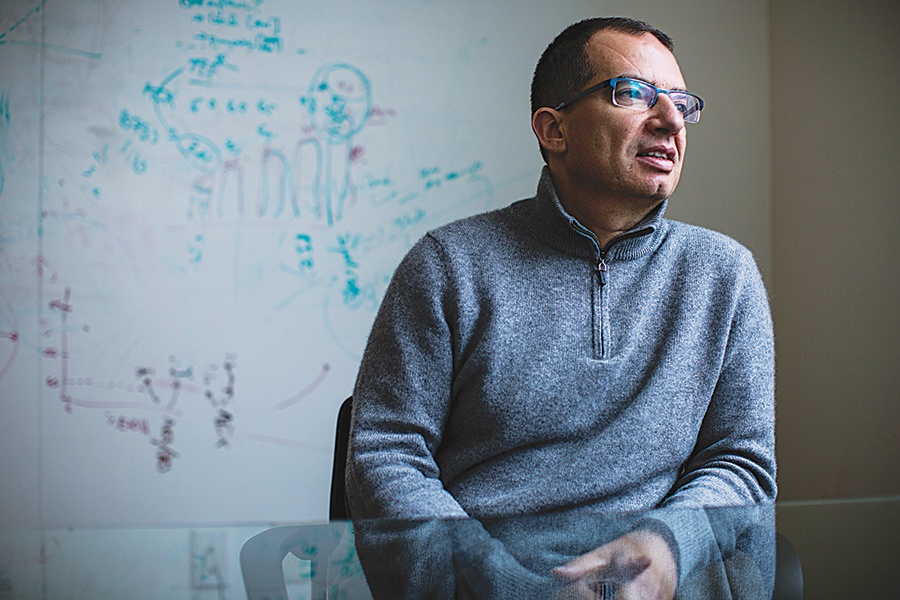 You were born in Marseille. Do you ever miss France?

I love this country, obviously. This is my fourth time living in America, and we’ve been here since September 2008 or so, going on 14 years this time. My wife is American, and both my girls were born in the United States, so they have U.S. nationality. But I miss France. I miss the culture, I miss the food, and I miss my friends and family.

If we’re lucky, we will find a mentor who changes our life. Have you had such a person?

I had a few people who changed my life in very profound ways, but the one that probably had the biggest influence was my uncle, my mom’s brother, because he set me on the path to move to Japan in the ’90s. I asked him if I should learn German or Spanish. And he told me, “This is the wrong question for your generation. The question should be, ‘Should I learn Japanese or Chinese?’” Then he asked me, “Do you have a good musical ear?” And I said, “No, I have a very bad musical ear.” And so he told me I should learn Japanese because I will never speak Chinese well. It was a two-minute discussion, you know, by the pool as we were vacationing in the summer at his house. And that moment for me changed my life because I started learning Japanese, ended up loving it, and then went to Japan, and being in Japan was a big factor in me going to business school. It opened my mind because I really learned the French culture while living in Japan. I believe all of us are biased by our culture where we were raised. It’s hard for us to really understand our own culture until we’re out of it.

Do you think America will always be the leader in creating great new drugs?

In the foreseeable future, I think it will remain the leader in drug discovery. It’s very interesting to think about what might happen in China, because the level of investments they are making across technology, including enabling AI, is really at a very intensive level. And so I don’t want to be arrogant in terms of where we might be, you know, 10, 20 years from now.

Do you have hobbies or interests outside of work?

I love to ski. I’ve done it a lot lately. I think this year, I’ve skied twice so far. I grew up in Marseille, so I like the sea. I like sailing, boating, and kayaking. My wife will say you will never know the true Stéphane until you see him on a boat.

Do you keep a boat somewhere?

We have a boat in the south of France. We kept a house there when we moved to the United States in 2008. We wanted a place that doesn’t move for the kids, since we move to many countries—Belgium, France, the United States.

What’s your favorite book from childhood?

I would say that would be The Little Prince. I’ve reread it many times throughout my life. And the book that I read every summer as an adult is Sapiens: A Brief History of Humankind.

Should we all expect to get a fourth COVID shot?

I believe that as the fall comes, we’ll need to get a fall ’22 booster around the same time as we get our flu shot. I’m going to get mine.

What about an annual booster after that?

I think for people at risk, yes. And I define that as people over 50; people who have comorbidities; police, medical workers, and so on. And I would say anyone else who doesn’t want to be sick. You know, I’ve been taking the flu shot for decades. I’ll be 50 this summer. When I was 25, I took it not because I was afraid of getting hospitalized or dying—I just did not want to be sick.

I know that every head of state in the world will take your phone call. Does this sense of power surprise you?

You and your family are very charitable. Is your focus in this regard limited to specific areas? Or are you a case-by-case benefactor?

Our goal is trying to make the world a better place, my wife and I, so we try to focus on people who have fewer opportunities. We think a lot about inequalities in education. We’re thinking about children in low-income areas, helping them get to school or get to college. We are helping the homeless. And focusing on the environment is another way that we believe will really help the planet in a very big manner.

We are all social animals. Is it time for us to resume our so-called normal lives?

I think so. We have all the tools now. We have masks, we have testing, we have vaccines, and we have treatments. I think people need to be responsible for their risk tolerance and be respectful of friends, coworkers, and loved ones. Before you go see Grandma, take a COVID test at home because you might be asymptomatic and carrying the virus. If you are in a location where the rate is very low per 100,000 people, as long as you’re vaccinated, the chance that you will get seriously sick is very low—you might have more chance of dying in a car accident or something else. People need to start to manage their lives, because we have all the tools. 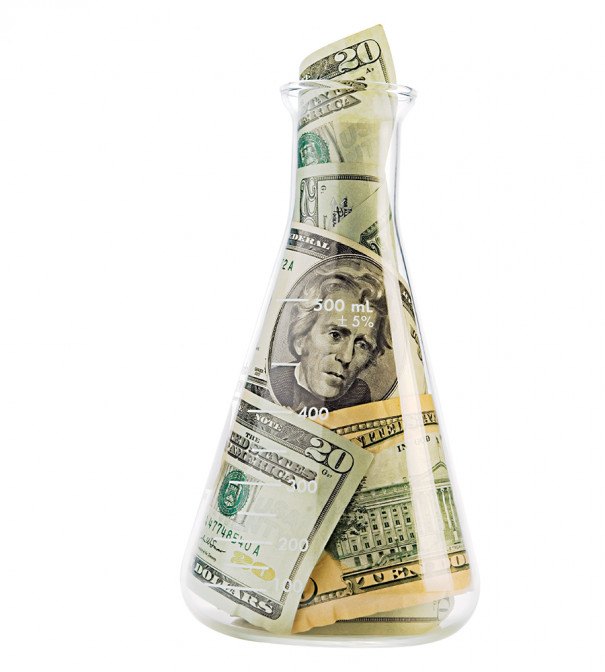 Follow the money (and the real estate) and you’ll see why the industry is booming in the Bay State.

Ginkgo Bioworks’s value, in dollars, as of September 2021, when it went public in one of the largest SPAC mergers to date.

Number of workers in the Bay State’s life-sciences sector.

Number of Moderna COVID-19 vaccines administered in the U.S. as of the end of February 2022.

Amount of capital, in dollars, invested in Massachusetts’ biotech industry during the first quarter of 2021.