An Interview with Michelle Wu, This Year’s Most Influential Bostonian

It’s not just that she’s the new mayor that makes Wu this year’s most influential Bostonian; it’s that she is a fundamentally new type of mayor. 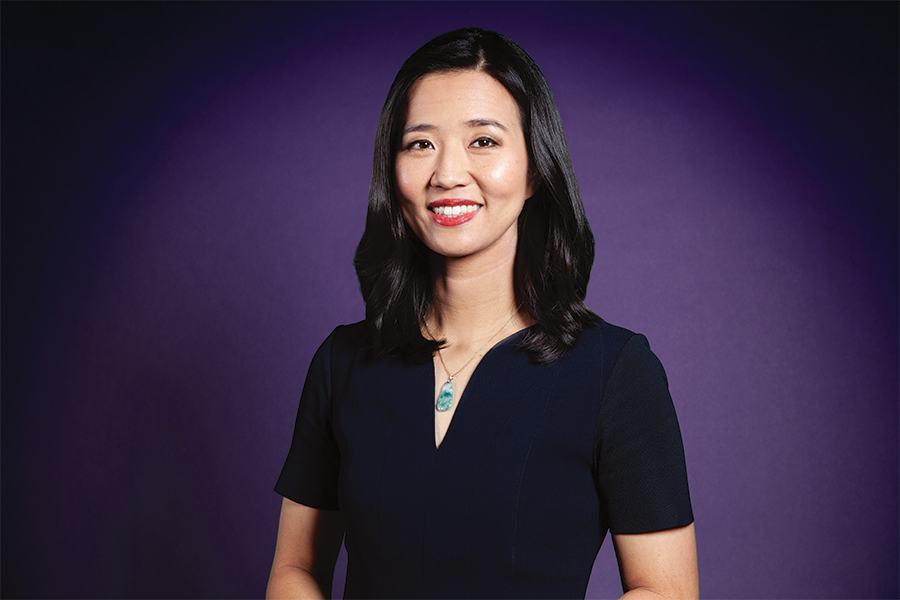 The city is changing over from old power structures to fresh ones, affecting everything from housing to contracting to development to policing and more. The first woman and person of color elected to Boston’s top job, Wu will oversee and direct this transition—probably for at least eight years, judging by history—creating new winners and losers, successes and failures, along the way. Several months into her term, we sat down in her office, a high-ceilinged enclave stocked with toys for her four- and seven-year-old boys, to talk about motherhood, the protesters who’ve disrupted her family’s life, and who’s really running things in Boston.

Is it hard to be popular?

I don’t know what it means to be popular. I’ve never been popular in my entire life!

The easiest way to be popular in politics is to do nothing. Don’t ruffle feathers. Don’t make controversial statements. Don’t upset the status quo. But our charge is to change the politics of our city so that everyone is truly seen, heard, and empowered to drive our decision making.

How has the power structure in Boston changed since you took office?

It wasn’t that long ago that I was running for city council the first time, and we doubled the number of women serving on the council—from one to two. It’s only been a couple election cycles of candidates stepping out to share their ideas and vision, but just as important, of community members organizing and believing that government can be a platform for activism and change in Boston. We’re already starting to see, even in a little over 100 days, that we can truly shift what’s possible.

Not everyone endorsed you. You ran against colleagues and allies. How have you managed that now that the dust has settled?

We as a city have always been incredible at banding together in times of need. Our swearing-in was only a few weeks before the Omicron surge, and everyone across the board has been working in the same direction to make sure that Boston has everything we need in this moment.

You’ve been plagued by protesters outside your family’s home, so much so that you restricted hours people can demonstrate in front of a private residence. But aren’t protests—even intrusive, irritating ones like you’ve experienced this year—just an occupational hazard for powerful elected officials?

I’ve been in office now for nearly a decade, and there’s been a marked shift in rhetoric in the past couple years in terms of intensity and toxicity. People in this country, thank goodness, have a right to free speech and to protest, but there’s a feeling of unfettered right to harass and just keep at the hate until you hope someone might crack or break. So I’ve decided for myself, my family, my neighbors, and my staff that I’m going to be clear about setting boundaries. We cannot normalize harassment and abuse and hate in our communities.

Is this a path you want for your boys, to follow you into politics?

Absolutely not [laughs]. I hope they’ll do whatever they feel called to do. I did not aspire to being a politician at all growing up, and I’m not sure that I want them to aspire to something like that either.

What’s your relationship like right now with the BPDA? Friendly? Icy?

We’re getting to know each other. Some projects have been in the development pipeline for years, so we are working to incorporate the mandate to focus on affordability, resiliency, connectedness, and transportation access in what’s already under way while we work on the bigger-picture structural changes that will be necessary.

Who, to your mind, is the most powerful person in Boston right now? Is it you?

Let me put it this way: I have a widget on my phone that counts down the number of days left in our term, because every single day has to count. We have to move at the speed and urgency of our families, and that means doing things a little bit differently than some might be used to. The only way to do that is with community partnerships and activism. We’ve seen people on the ground who spent 14 months volunteering on the campaign, organizing behind issues, being active on social media. Boston taps into its full potential when each one of our residents sees themselves fully empowered in our city. That’s where the power is in Boston.