What we learned about how the mayor is adjusting to her new digs. 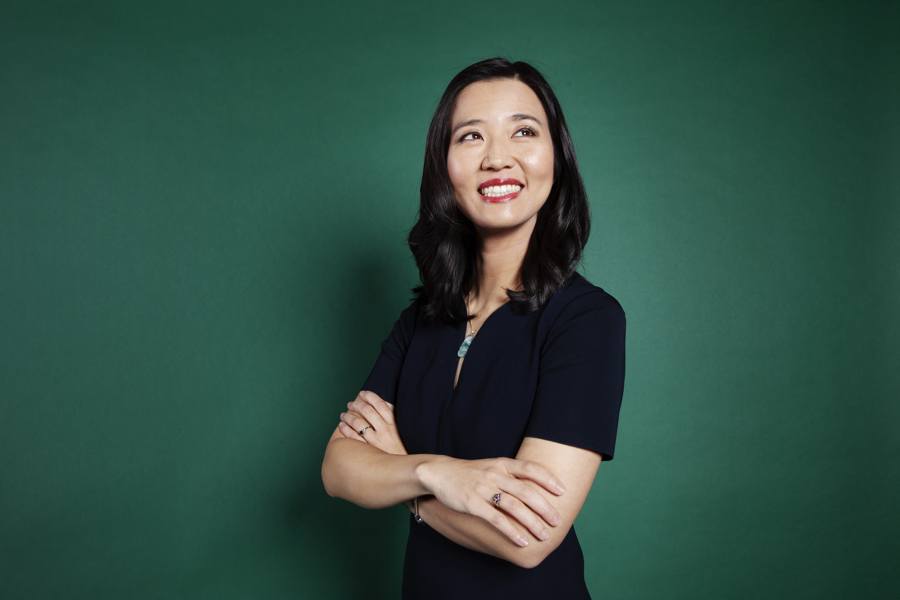 When I arrive at Mayor Michelle Wu’s office in early April to interview her for our annual power issue, she has exactly 1,372 more days left in her term. I know this, and Wu certainly does, because she keeps a ticker on her phone that slowly counts them down. After all, she’s pledged to remake the office in radical ways over the next four years—and has shown she’s not afraid to buck tradition, and royally piss people off in the process, if need be. So if she wants to make the most of her time in this space, a cavernous concrete box with a million-dollar view of Faneuil Hall, she’d do well to keep that timeline in mind.

You can tell a lot about a politician (or try to, anyway) by taking stock of how they’ve chosen to decorate, and manage, the space they get to occupy. In here, you’ll find a small stockpile of toys and kid-friendly furnishings for her two boys, ages four and seven: a pair of little beanbag chairs embroidered with their names, a cluster of toys (Mega Bloks, a stuffed panda, Connect Four) and a small collection of Game of Thrones memorabilia (hers, not theirs). You’ll also find a black upright Yamaha piano, with music books splayed out on its top (she’s a classically trained pianist, and staffers tell me it’s not uncommon to hear sonatas emanating into the hallway), bookshelves stuffed with mementos, and a framed illustration of Kamala Harris and Ruby Bridges (signed by former interim mayor Kim Janey, who gave it to her as a gift).

We sat down with her here for a long chat a few weeks back, much of which made it into the May issue. But here are some other things I learned during our chat, and that you may not have known, about how Wu is settling into her new digs.

She says requesting a sit-down with her might not be the best way to get things done.

I’m a working mom, which means that every minute is incredibly precious. And I know that just as when you’re managing a family, you can be reactive and not have a system—all the laundry is all over the place and the dishes aren’t done—and then everybody’s frustrated at the end of the day. Or there can be some structures that help keep everyone on the same page about how we all best use our time together. So my schedule is very intentional. I want to hold myself accountable as to what percentage of my time I’m working with various cabinet chiefs, which percentage I’m out in the community, what percentage I’m thinking about specific policy areas, what percentage building our team and trying to move forward on the hiring process.

So when I look back on how my time was spent month-by-month, for a lot of the meetings my team is empowered. They speak for me. They are my direct representatives. So they should be seen as, in some ways, even more important to meet  with than with me because it’ll actually get done by the person who can manage and follow through.

She has three golden rules for staffers on how to use their time.

We have really worked to infuse changes in the processes and the politics throughout everything we do. The goal is to model the change that we hope to see out in our communities through how we get things done within City Hall. We are seeing leaders in roles now who are bringing a wealth of lived experience and community impact and connection into these roles. I keep saying to everyone, in every cabinet meeting we have that I hope our administration lives up to three principles. The first is that city government is special because we do the big and the small, but we do the big things by getting the small things right. The second is our charge is to get City Hall out of City Hall and into our neighborhoods, meeting people where they are—block by block, community by community. And the third is to really embrace the possibility of Boston and of city government in this moment, so we’re trying to move the needling on the root causes of issues, and do so not at the usual pace of government, but with the urgency that our families are facing.

She has a few favorites among her bookshelf trinkets.

She blows off steam by playing her in-office piano

She’s relieved that City Council is sharing the load

For many years serving on the council, it was incredibly frustrating to watch a budget process play out where the mayor would present a budget in early April, and by and large, everything was allocated. We would have public hearings—30 or 40 of them, sometimes four or five hours each—where community members could give two minutes of thoughts. And then by the time the revised budget was presented to us again, very little if anything had changed, because it was too late to affect broad strokes within the budget. So this year I was very excited that, after the changes on the ballot last November, we flipped the process on its head, partnered with the council, and held community listening sessions about how Boston should spend our dollars upfront.

In previous iterations there was this feeling of, who would get to do it? Is it a mayor’s issue? Is it the council getting credit? And the reality is that we have way too much to do for us to be worried about that. Everyone should take on as much as they possibly can right now, because the urgency on all of our issues is past the point of getting caught up in who gets the credit.