At one of Boston’s most famous historical burial grounds, more than 1,000 Black Bostonians were laid to rest in unmarked graves. Their legacy continues to haunt us today. 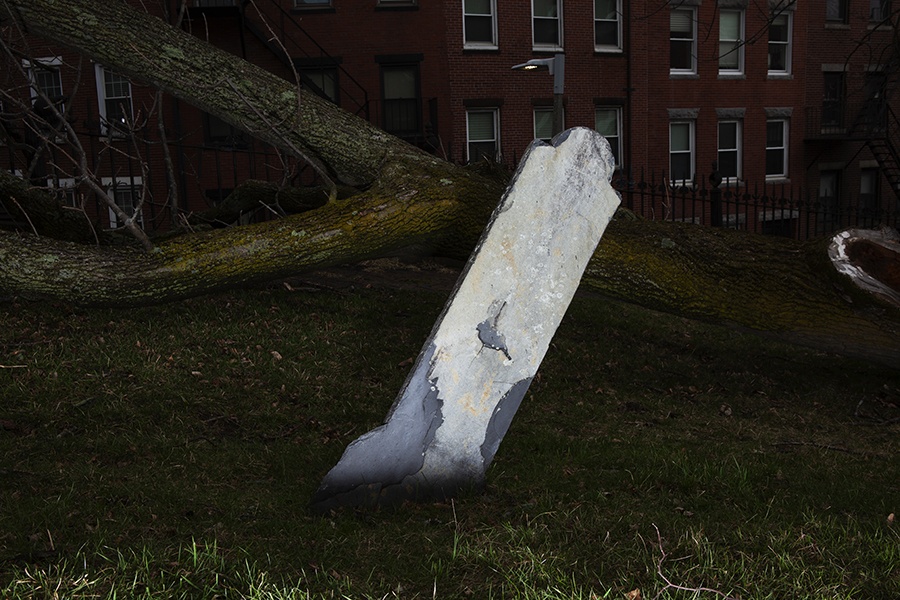 Buried at Copp’s Hill are members of the New Guinea section of the North End, thought to be the first community of free Blacks in the colonies. / Photo by Mona Miri

Entering the Copp’s Hill Burying Ground for the first time was an experience I’ll never forget. I walked up Snow Hill Street to the entrance and up the steps onto the grounds, where I read a standing display that held the entire layout of Copp’s Hill. There were an estimated 10,000 people buried there between 1660 and when the last body was interred in 1968. Unlike in other places around the country, Boston cemeteries in the 17th and 18th centuries were open to whites and Blacks, albeit in separate sections.

After reviewing the display, I was able to plot my course, and immediately sought out the Black section. Once there, I found a monument dedicated to the abolitionist and Black leader Prince Hall, but next to it was a huge barren plot of land running along the Snow Hill Street side down to the corner of Charter Street. It is estimated that more than 1,000 slaves and former residents of the North End’s New Guinea community, which was named for the West African nation where many of them—or their ancestors—had roots, were buried here. The historic significance of this community cannot be overstated: New Guinea is not just believed to be Boston’s very first Black community, but the first community of free Blacks in the colonies. And yet, along this entire expanse, there were only about five gravestones. My heart sank.

As a historian, I regularly visit old Boston cemeteries, particularly those in walking distance of my home in the South End/Lower Roxbury. I go to the Central Burying Ground on Boston Common; the King’s Chapel and Granary burying grounds, which are across the street from each other near Downtown Crossing; and Eliot Burying Ground in Roxbury. Boston has many of the oldest graveyards in the United States, and usually they’re meticulously cared for. There are maps, displays, and more than enough signs and markers to help you find everyone of note who’s interred there.

That was not what I found at Copp’s Hill. Near the end of that section along Snow Hill Street, where the New Guineans were buried, there’s one lone, barely legible grave marker poking up that’s for a man named Abel Barbados, who died in 1817. Each time I have gone back in the past five years since my first visit, the grave marker for Barbados, a member of the African Meeting House, seems to lean farther and farther to the right. I have to fight the urge to straighten it out. I am wracked with fear that one day it might completely fall over and end up lying on the ground in the middle of what looks like a bare patch of the cemetery.

It wasn’t merely the leaning gravestone that upset me, but, more so, what it represented. Barbados’s grave was the lone evidence in this section of the ancient burying ground that Black folks had built lives and thrived in the North End. And I felt as though it was hanging on for dear life.

Approximately 30 years after Barbados was buried here, his community, Boston’s first Black community, began to fully disappear without a trace from the North End. It was the start of a pattern that in many ways has lasted until today, a pattern of the erasure of Blacks in Boston, from entire neighborhoods and from history itself.

Hall, Barbados, Mary Augustus, Sarah Ritchie, and Margaret Colley. Those are the names of the five Black Bostonians buried in Copp’s Hill who have grave markers. No marker exists for Phillis Wheatley, who is reportedly buried in Copp’s Hill, nor for her husband, John Peters. Wheatley died destitute in 1784, more than a decade after becoming the first Black woman to publish a book, Poems on Various Subjects, Religious and Moral. While she enjoyed celebrity status for a brief time and aided in the American Revolution effort with poems and published letters, she most likely wasn’t able to earn enough money to afford a headstone.

Boston has consistently made efforts to bring awareness to and celebrate the contributions of Wheatley. You can find a placard on the side of a building at the corner of Tyler and Beach streets in Chinatown denoting the approximate location of Griffin’s Wharf, where John Wheatley purchased Phillis, then an eight-year-old girl from West Africa, to be a domestic servant in his home in 1761. In Roxbury, near Nubian Square, there was the Phillis Wheatley Middle School—where the Boston Day and Evening Academy now sits—and a statue of Wheatley is part of the Boston Women’s Memorial along the Commonwealth Avenue Mall in the Back Bay.

Still, in my years visiting Copp’s Hill Burying Ground on the Snow Hill Street side, looking at that almost bare patch of land, I have come to the sobering realization that regardless of how celebrated Wheatley may be in this city, I can only imagine where her final resting place might be. Like Wheatley, the other Black people buried here either couldn’t afford grave markers, or there was simply no one to maintain the graves after their descendants in the North End were pushed out over time by the forces of gentrification. Their graves—and locations—were eventually lost to the ravages of time.

As sad as I am about the situation in the graveyard where these Black Bostonians were laid to rest, the reality is far worse in the place where they lived out their lives. You can still find plenty of documentation and records about the North End’s white residents of the 17th and 18th centuries. However, it’s a challenge to unearth information about their Black neighbors, who lived in close proximity to them. Very few names exist in documents, and there are painfully few records of their lives and exploits. Meanwhile, on the streets of the North End, nearly every trace of their existence has been removed. In fact, the only remaining physical proof that the North End was ever home to the first free Black community in the American colonies are these few remaining grave markers in Copp’s Hill Burying Ground and a couple of installations that provide information on who’s buried there.

Where did an entire Black community that spent nearly 200 years carving out their own space in the North End disappear to, you might ask? I certainly have. Sometime between 1846 and 1855, a large influx of Irish immigrants began to displace those who lived in the New Guinea section. Over time, after slum clearance, much of the North End’s Black population moved into the nearby West End, where—along with Beacon Hill’s north slope—the bulk of Boston’s Black population lived between 1830 and 1890.

After 1895, Black Bostonians were once again compelled to move en masse to the South End and later Lower Roxbury due to rising rents and land redevelopment. By this time, there was no trace of a Black community ever having been in the North End save for the dead buried in Copp’s Hill Burying Ground. Then the West End was essentially razed in the late 1950s, destroying yet another neighborhood once known for having a sizable Black community—and with it any evidence that a Black enclave once existed there.

Where did an entire Black community that spent nearly 200 years carving out their own space in the North End disappear to, you might ask? I certainly have.

Several years ago, I began giving tours of my neighborhood to out-of-town friends who were under the impression that Black and Latino people didn’t exist in Boston. It is a notion they formulated solely from watching television, film, and other media set here—and one I was able to disabuse them of on my excursions. Afterward, they began raving about the experience online and recommending my tours to their friends and families whenever they visited Boston.

On these tours, as I walk around my neighborhood where the South End, Lower Roxbury, and the Back Bay intersect, I can point to buildings or landmarks that, in another time, held significance to Black Boston and its long, rich history. In some cases, there are artist renderings or even old photographs in the archives of these establishments. It’s possible to find records of Black businesses and residences. There are old ads and mentions in newspapers, or you can always look through Census records of years past. For a historian, these multiple forms of readily available documentation are helpful. But the severe lack of signage or placards in the neighborhood to identify these sites to locals or passersby still stings me.

One of the main reasons I’m an advocate for having adequate signage and documentation of the sites of historic significance to Black Bostonians is because the forces of gentrification often simultaneously displace the communities that lived in a neighborhood for several generations while also erasing their history. Along the way, a new narrative of the neighborhood, created to make it attractive or palatable to new buyers or renters, helps to overwrite the existence of the previous community who inhabited it for generations.

I experienced this firsthand after the final vote to maintain rent control failed in 1994, which led to my family being evicted from a rent-controlled unit we’d lived in since 1975. In the last few years of our time on that stretch of Mass. Ave. between Columbus Avenue and Tremont Street, the entire neighborhood changed. Family-owned stores and businesses, which dated back to the Jazz Age and whose employees knew everyone on the block by name, all but disappeared. The overwhelming majority of the families who lived along the same stretch as we did were also priced out due to urban renewal and skyrocketing rents, which sped along the South End’s gentrification. None of our new neighbors had any knowledge of the rich history of the neighborhood they now called home. They had no idea that each day they might be walking past landmarks and historical sites of importance to the Black community.

Through my tours, my Twitter and Instagram posts, my podcasts, and my radio and documentary appearances, I have the luxury of being able to enlighten people and spread awareness about the rich Black history in my corner of Boston and beyond. I can point out existing buildings and landmarks and educate people about what used to be there. On my tours, I often field questions about how long Black communities have existed in Greater Boston and Massachusetts. I tell my tour-takers about New Guinea, but I don’t have anything I can show them in the North End. I have no tour to give.

At the base of Copp’s Hill is what’s now known as Commercial Street. Across the street are the DCR Steriti Memorial Rink and the Eliot K-8 Innovation Upper School, which occupy the land where the New Guineans likely lived and worked between 1650 and the mid-1800s in close proximity to the North End waterfront. I often think about the lives of all of the nameless, faceless, unheralded, and undocumented Black Bostonians who lived, worked, dreamed, and loved in this city and fought to be free of bondage and servitude. And it only makes me more motivated to ensure that the passage of time won’t result in more Black settlements and communities being erased and forgotten about in Boston’s future.