Apps, brick-and-mortar sports books, media blitzes, podcasts, ads, free cash. They're all coming to entice you to gamble on sports. Some of them are already here. 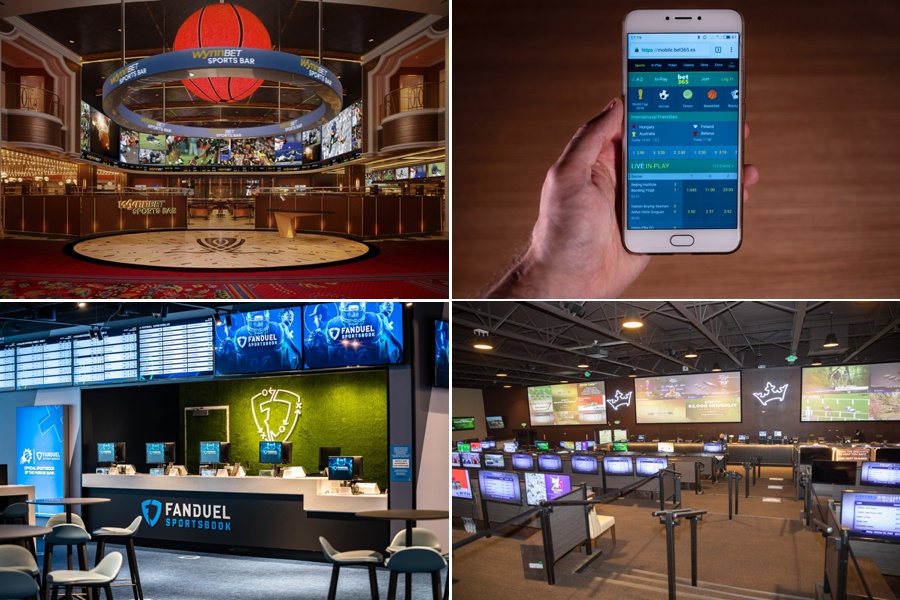 Ever since the Supreme Court paved the way for legalized sports betting in 2018, Massachusetts gamblers—and the companies hoping to accommodate them—have been anxiously awaiting a green light from the state to let the wagering begin.

So far 30 states and D.C. have opted in to the now-multi-billion-dollar industry in the past four years, including most of our New England neighbors, so it’s just a matter of time before Massachusetts jumps on the bandwagon.

We aren’t exactly in the end zone yet, but the state legislature is closer than ever to passing a law that lets you legally put a couple bucks on the Pats if you so choose. Sports betting bills in the House and Senate are being debated as we speak.

So what, exactly, will legalized sports betting bring to Massachusetts when it finally arrives? And if you’re the gambling type, what kinds of entertainment options will you have? We talked to a handful of experts, and here’s what they say is coming soon to a sports bar, or smartphone, near you. 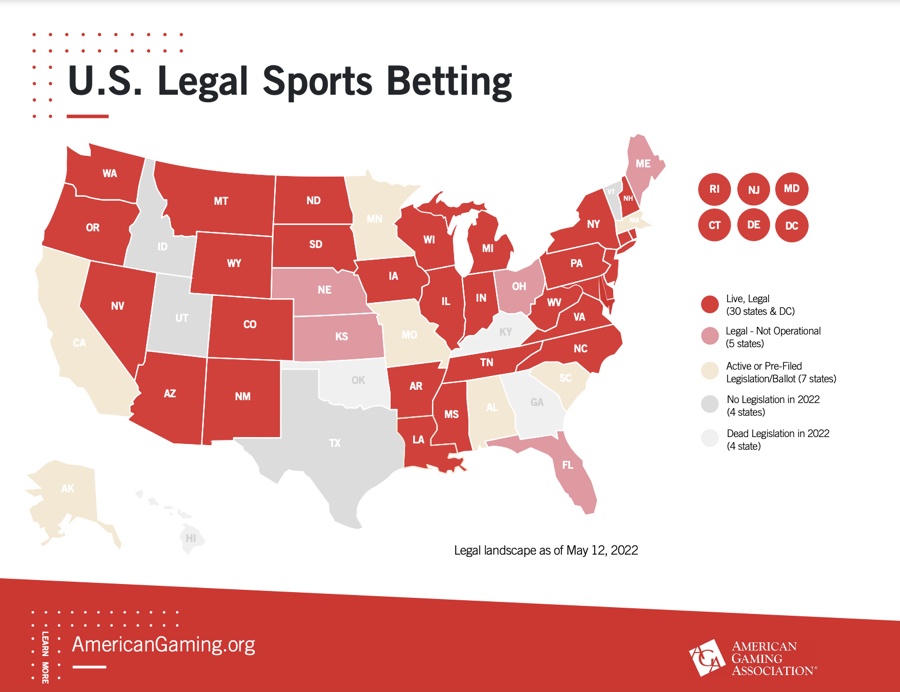 A lot of people will be betting on their phones

The vast majority of sports bettors—more than 80 percent, according to American Gaming Association statistics—do so on online. All the major sports betting companies collect wagers via smartphone apps, and laws in most states allow you to set up an account and start betting right away. Some states only allow bets placed in person, and others, including Nevada and Illinois, require you to register for an account in person at places like casinos before you can bet on-the-go. If Massachusetts allows mobile wagering without restrictions like that, smartphone betting could bring thousands of local gamblers into the legal gaming market overnight.

Again, the law is still being sorted out right now, but for now it seems like lawmakers are leaning toward allowing betting at the state’s three casinos, and at six additional brick-and-mortar locations.

What do these places look like? Picture a sports bar with lots of TVs and beers on tap, but add in teller windows or digital kiosks where fans can place bets on games. You don’t have to go far to see what this looks like in practice: New Hampshire has three of them right across the state line.

In fact, you can go visit a Massachusetts sports book right now if you so choose. That’s because the WynnBET Sports Bar, which it opened at the Encore casino last year, is exactly what we’re talking about here, except you can’t (legally) place bets there yet. All they really have to do is swap the word “bar” with “book.”

If other states are any indication, additional sports books are likely to open up in stadiums or other places where lots of sports fans gather. So you’d better believe the big sports books are eyeing established destinations like Patriot Place or the Hub on Causeway.

Local bettors will stop making pit stops in other states

It’s no secret that local sports gamblers have been making quick trips across the border to place their bets in New Hampshire, Connecticut, and Rhode Island, which have all beat us to the punch on opening legal sports books. To give you a taste of how many of your neighbors have been doing this, DraftKings said that 28 percent of bettors at its New Hampshire locations before the Super Bowl this year had Massachusetts addresses. Among those who have expressed frustration as this phenomenon takes hold? Gov. Charlie Baker:

We filed a bill in 2019 and again last year to make sports gaming legal. MA is losing out to neighboring states on this, especially during big games.

Depending on who you ask, sports bars will benefit

So what does all this mean for the local pub that’s typically packed for the big game? Some sports bar owners believe that legal sports betting will give people more reason to drink at their establishments while they wait to see if their smartphone-placed bets pay out. (One expert we spoke to said post-legalization, you might see bars try to position themselves as particularly gambler-friendly by advertising perks like superior WiFi).

But others, particularly sports bars located near casinos, worry that the rise of brick-and-mortar sports books will entice their customers away from their barstools. So for that reason, the Massachusetts Restaurant Association tells us it’s officially neutral on whether legalization would be good or bad for the bar business.

A media blitz is coming

Expect the competition for your attention to be fierce. The new law will likely restrict advertising in some ways, but you can expect to hear lots of ads for gambling on sports-related media, new partnerships with sports franchises, swarms of street teams promoting one service over another, and a host of other promotions. There may be some restrictions: State lawmakers have debated a ban on ads for sports betting during live broadcasts. After all, it’s easy to see how this could get out of hand. Who can forget the fantasy sports app advertising wars of a few years ago? No one wants that.

Maybe things will be a little less overwhelming this time around. We’re already seeing efforts like new DraftKings podcasts designed to steer business to their gambling app, including two helmed by Boston’s own Jared Carrabis, who DraftKings hired away from Barstool this year. There’s more where that came from: Analysts have called this “a new era in sports media.”

That means a lot of deals for gamblers

You can bet that all this competition means you’ll be pelted with introductory offers as services try to lure you with big offers such as risk-free bets. The big sports betting companies want loyal, long-term customers, so they’ll spoil you in the early days. If you take advantage of this, experts say, you can bet with a lot of free cash during this honeymoon period.

You’ll be able to bet on Boston college sports, maybe

It’s still up for debate whether people will be allowed to bet on college sports. This would certainly spice things up at the Bean Pot, and among other things put a lot of additional stress and pressure on young, unpaid local athletes. But experts say allowing betting on college sports is sort of an afterthought in the northeast, and not likely to impact the sports betting industry much either way. This is a heavily pro-sports-focused town, and nationwide, the AGA says that college sports only make up about 20 percent of bets, anyway.

Even once the governor adds his signature to a legal betting law, as he is very eager to do, smart money says it won’t happen overnight. As anyone who followed the long and winding road that came after we legalized recreational pot shops knows, precious little happens quickly in Massachusetts. If and when sports betting is legalized, the ball will be in regulators’ court, as state officials get to work shaping the specific rules that will govern the industry. That responsibility will likely fall to the Massachusetts Gaming Commission, which says it has already started prepping for the possibility of legalization. In a further sign the commission is getting ready, last year it released some preliminary reports on sports betting. Experts we asked couldn’t give us a concrete estimate of the time lag in Massachusetts. It’ll happen when it happens.

There will be new tax revenue

Legalizing sports betting will raise some tax money. But big picture, it actually won’t be a giant windfall: It’s estimated to bring in somewhere between $35-65 million a year, lawmakers have said, which is some serious cash, but a drop in the bucket compared to the taxes paid by casinos, which can generate that much tax revenue in just a handful of weeks. And last year alone, the state lottery brought in more than $1 billion.

That’s because despite handling huge amounts of money, sports book margins are pretty slim. How high that number goes in Massachusetts will also depend on what the state legislature decides, and how many gamblers decide to leave the black market behind once they have legal options available to them.

Your neighborhood bookie will suffer

You know who’s not excited about all this? All the old-school illegal bookies still making a go of it in Massachusetts. It has already been tough for locally based, old-school black market operators to compete in the smartphone era, as online betting has made it way easier for illegal gamblers to place bets without having to rely on someone close by. Legal competitors just makes it worse. A 2020 study found that in states with legal sports betting, wagers with illegal bookies fell 25 percent.

Illegal sports books, though, will always have an edge over the legal kind for any bettors trying to avoid the government’s prying eyes. How many bookies are still earning a living this way is hard to say—they are, by nature, a shadowy bunch. But as long as people are motivated to avoid paying taxes or hide their assets from divorce attorneys, some gamblers will be willing to break the law to do so. That’s what one Boston bookie told the Wall Street Journal a few years ago, anyway. Still, as enticing as tax-free earnings might be, the last time we checked, DraftKings never sent a guy to bust your kneecaps for missing a payment. And unlike some of the seedier online options run out of places like Costa Rica and Antigua, FanDuel can’t simply close up shop and refuse to pay if you win big. So, some things to consider.