Jamaica Plain, Roxbury, and Dorchester Will Have Open Streets Days This Summer

We're rethinking how streets ought to be used in all of our neighborhoods, and that's a very good thing. 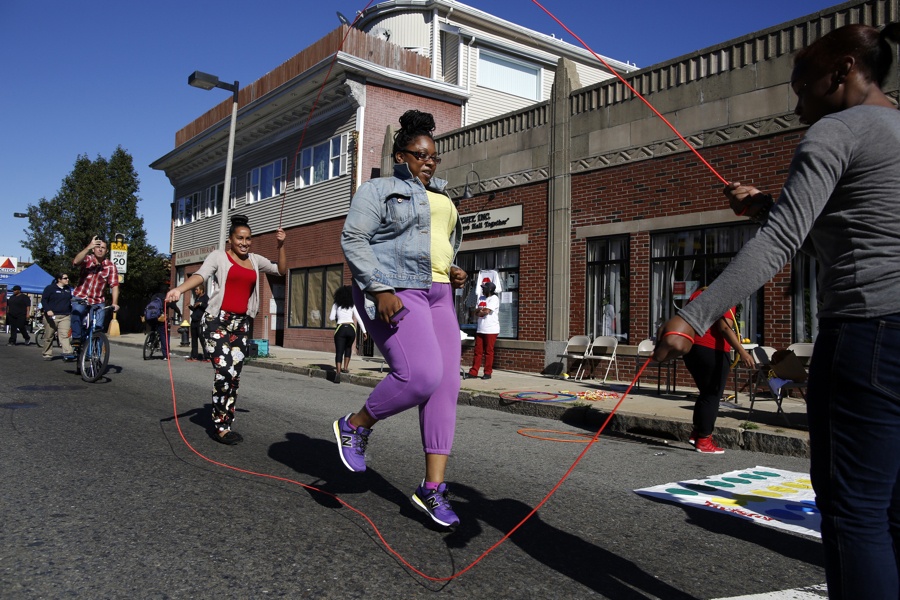 Queenie Howard of Roxbury plays double dutch on Blue Hill Avenue during Circle the City, an open streets initiative in 2013. Photo by Jessica Rinaldi for the Boston Globe via Getty Images

We’ve always been big cheerleaders for open-streets initiatives in Boston here at the magazine. When you exclude cars from big stretches of roadways, people come from all over to gather, dance, shop, eat, and luxuriate in the wide-open space that’s suddenly available to enjoy when people-movers aren’t hogging all of it.

Open Newbury Street, now one of Boston’s most joyous summer traditions, has always been the perfect case study of what this looks like in practice. A part of town that is all too often a chaotic mess of honking cars co-mingling with hordes of pedestrian shoppers becomes an oasis of urban bliss.

Now, thanks to a new city program called Open Streets Boston, the concept is migrating outside the Back Bay and into other neighborhoods that could also benefit from shooing cars away, at least for a day.

Mayor Michelle Wu has announced a series of open-streets events to be held in Jamaica Plain, Roxbury, and Dorchester throughout the summer.

Save the date, Boston! Three new Open Streets events are coming to welcome neighbors for community, joy, and play!

The first, on Sunday, July 10, will be on Centre Street in JP from Jackson Square to South Street. Then on Saturday, August 6, it moves to Blue Hill Ave. in Roxbury from Dudley to Warren streets. Then on Saturday, September 24, on Dorchester Avenue from Freeport Street to Gallivan Boulevard.

Those roads will be blocked off with barricades on those dates from 9 a.m. to 3 p.m., and all kinds of fun activations are planned, from musicians to street vendors and food trucks. The program is currently recruiting sponsors and volunteers, in case you want to get involved.

The city will also bring Open Newbury Street back for another go this year, although dates have yet to be set. And, per Thursday’s announcement, another open-streets initiative is in the works for the space between Copley Square and the Boston Public Library from June 7-17, as part of a pilot program called Copley Connect.

Also announced today, Copley Connect, a pilot that will study the future use of Dartmouth Street between Boylston St. & St. James Ave for ten days, June 7 to June 17, between Copley Square Park & the Boston Public Library will be closed to vehicle traffic & open to pedestrians.

Put together, hopefully these events can further demonstrate just how much you can accomplish by turning streets over to people. Also, given all the discussion amid all the tumult of the pandemic about how we ought to remake our streets in this magazine and elsewhere, it should provide some useful data about how this can work not just in high-profile shopping districts that are well-trod among tourists, students, and well-to-do Bostonians closer to downtown, but everywhere. Maybe, if all goes well, it’ll get us a few steps closer to the overhaul of streets for which this city is long overdue.

There is, we have to say, one notable exception to zero-cars rule on these assorted open streets—one vehicle in particular that is not only allowed, but urged in the strongest terms to attend: This one.