Pollen in Boston Is More Apocalyptic Than Ever. Or…Is It?

It feels that way, but so do so many things these days. 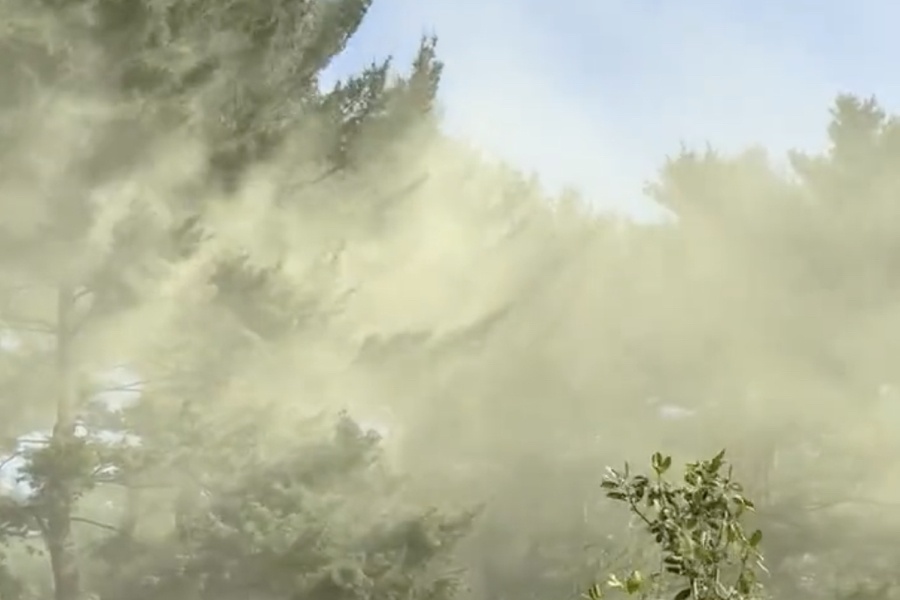 Where were you when The Wall of Pollen of 2022 swept through the Commonwealth, bathing every home, highway, nostril, and windowsill for miles in its ghastly yellow-green haze, with such density and ferocity you could see it via radar?

I was where I have been for the vast majority of these past few years, tapping away at my laptop from my home office, watching yet another strange new threat—the latest in a series of Airborne Toxic Events—manifest outside.

I had already learned to make space in my brain for obsessively tracking the likelihood of infectious respiratory droplets in the air near me by keeping an eye on the viral content of Boston sewage. And I had accepted the new reality in which smoke from wildfires on the opposite side of the country can make it all the way to Boston and block out the very sun (and, who knows, it may just keep on doing that all the time from here on out?). And now the CDC says we should all “take extra precautions” regarding monkeypox, so the baseline precautions we’ve been taking against monkeypox all this time will no longer cut it. So sure, maybe the way pollen happens now is not with little wisps in the breeze, but in terrifying tidal waves.

Did you read about the pollen clouds across the northeast this weekend? Director of Horticulture Andrew Gapinski took this video of the phenomenon behind our Hunnewell Administration Building. pic.twitter.com/JeBvo3nJ1T

Was it always this bad? Every car on my street at this moment is very suspiciously coated in green powder in a way I don’t recall seeing before. The number one most upvoted post on the local Reddit page today says, simply, “Fuck this pollen,” adding “That’s all.” With anecdotal evidence like this, it’s easy to conclude that something different is going on. Climate change, certainly, is going more poorly than we initially thought it would, so why wouldn’t allergy season be getting worse by the year?

But, some mixed news on that front: The answer is both no and yes.

Dr. Anilkumar Katta, allergist and clinical immunologist at Tufts Medical Center, tells me that this is a particularly difficult season for allergy sufferers, as pollen levels are as high as they’ve been in the past five years. That’s largely due to this season’s weather patterns.

“This year, because of the unusually colder temperatures initially, trees didn’t have much time to bloom, and the pollen came in a little late with higher intensity,” Katta says. “So people had to bear the brunt of everything blooming at the same time.”

In the grand scheme of things, he says, this allergy season is not really out of the ordinary. But it’s important to take into account the years leading up to this one, when pollen was comparatively low, and people also spent more time indoors than they usually did—many of them, at least in the early days, masking outdoors. The current combination of outdoor masklessness and a particularly pollen-rich spring, he says, have joined forces to make this year feel like the Worst Year of All Time.

“I hear that every year,” he says with a chuckle. “But I think this year is particularly worse for people who did not have symptoms the past few years.”

On a hopeful note, he wanted to stress allergists such as himself can cure—not treat, cure—certain seasonal allergies with the proper medications. Which is not something all doctors can say, but apparently he can, either through prescription medicine or via anti-allergy shots.

And no, he said after I queried him on this, you can’t cure your allergies by eating local honey. At least, doing so is not really the most effective approach to the problem. Eating a little bit of unpasteurized honey can prime your system with a bit of regional pollen and perhaps alleviate very mild allergy symptoms, but if your case is severe, you’ll need more than a little sweetener. “You would have to drink liters of honey to have any benefit,” he says. Fantastic news for Winnie the Pooh, but not for you.

The Weather Channel’s latest 15-day allergy forecast puts us somewhere between “moderate” and “high” pollen levels. So not ideal, but not out of control by any means. CBS meteorologist Terry Eliasen chimed in this week amid all the pollen complaining to describe this year’s situation as “fairly typical.”

For the Wall of Pollen, we can also blame the weather—specifically, a sudden drop in temperature and an unusually strong breeze that coincided with a healthy springtime buildup of pollen on plant life in the area. Meteorologist Dave Epstein called it “a horticultural and meteorological intersection, resulting in a dramatic pollen front.” So, a strange turn of events, but not what you’d call a huge deal. Pollen levels ebb and flow, and that’s just how it is.

So, I guess, don’t let all that green powder hurtling toward you this spring get you down. Consider this an invitation to breathe easy—or, at least, not with much more difficulty than you would ordinarily experience this time of year depending on your personal sensitivity to allergens.

Gesundheit, by the way!