We Asked an AI to Design the New Massachusetts State Flag

Some truly beautiful options for our beloved Commonwealth. 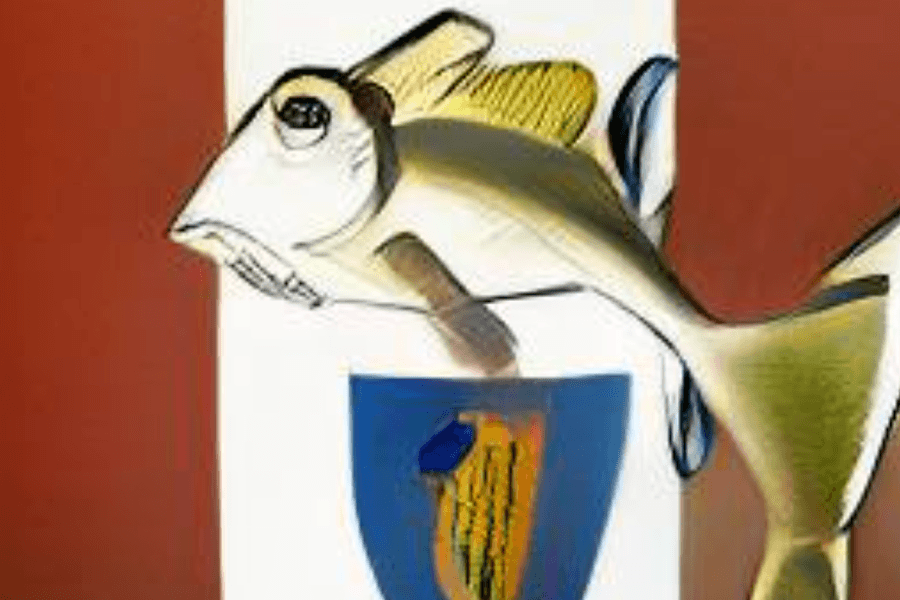 AI-generated images are all the rage right now. The rise of easy-to-use technology like the DALL-E Mini, which can take simple text prompts and turn them into visuals in a matter of seconds, has led to an avalanche of artificially intelligent artwork online.

You may, for example, have seen this groundbreaking invention used to see what it would look like if Big Bird stormed the Capitol, if a bottle of ranch dressing testified in court, if the Boston Tea Party was caught on CCTV, or if Freddie Mercury ate a bowl of ramen in a washing machine.

The results are often, as you can see, grotesque. For whatever reason, it is not particularly good at rendering human faces, and the rationale for how it combines and remixes available content on the web is known only to its creators. Sometimes, however, the AI produces some truly beautiful results, and it simply boggles the mind that we now have a tool capable of bringing dreams and nightmares such as these to life, right at our fingertips.

Which is why I have spent the past several days plugging all sorts of prompts into this system and seeing what it spits out. Some examples include: 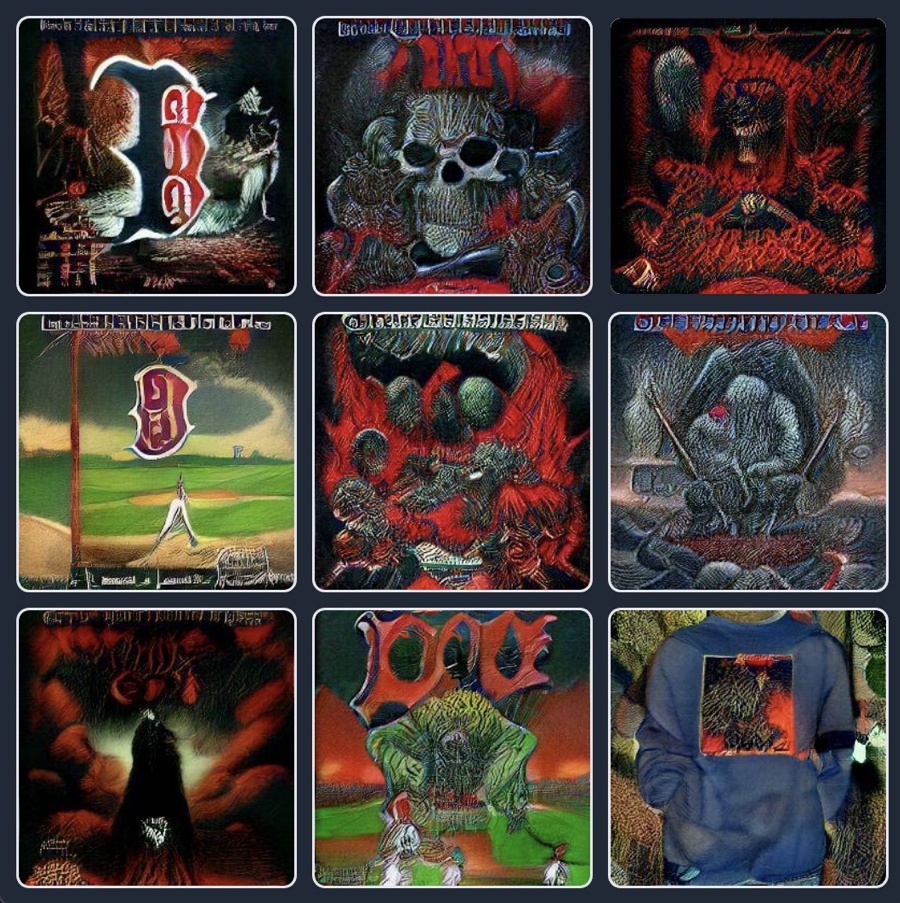 “Muppets rowing in the Head of the Charles Regatta” 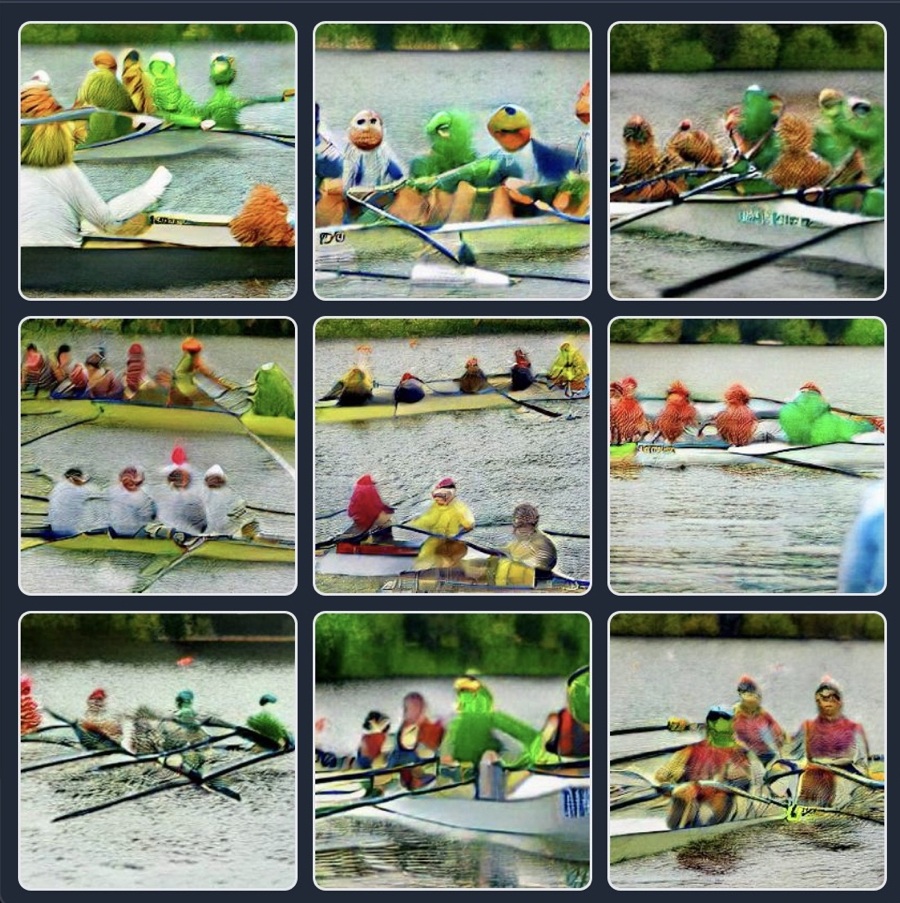 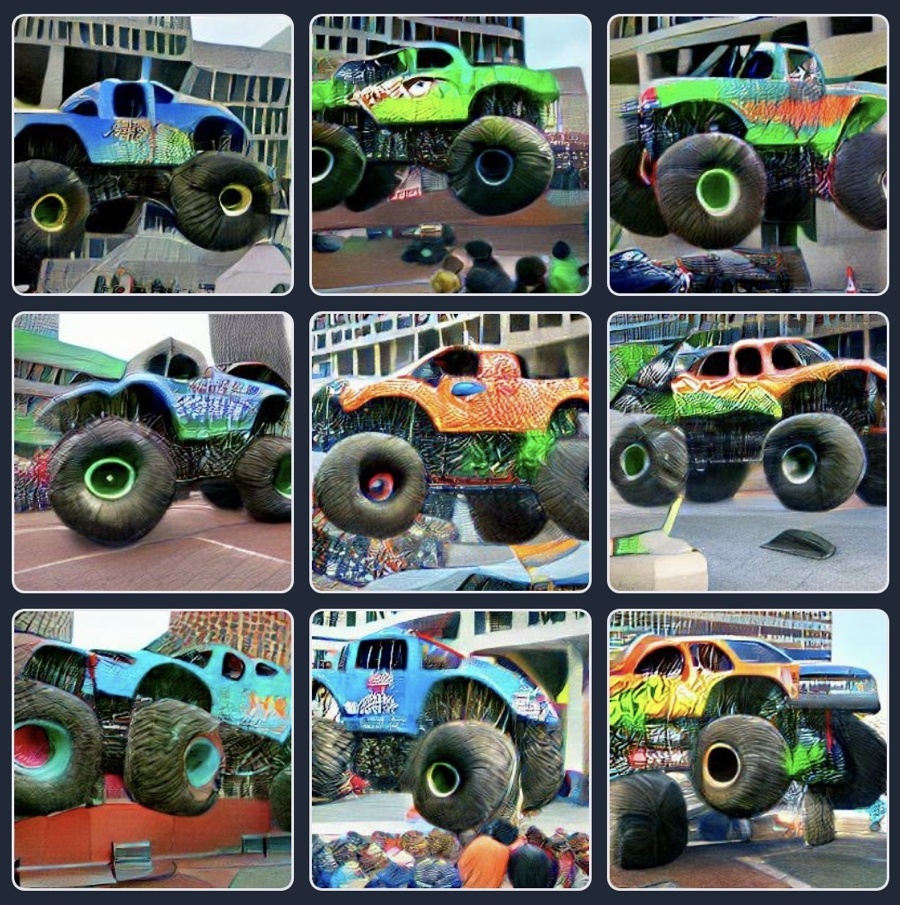 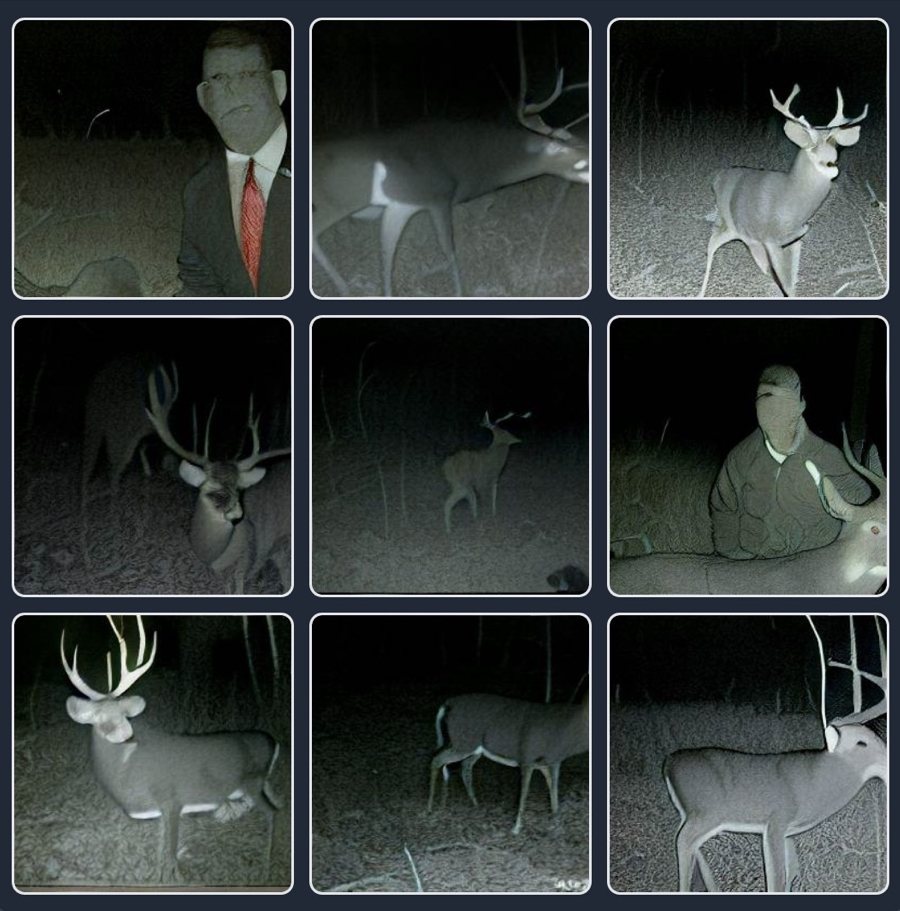 Fun, right? It has also gotten me thinking: Perhaps creativity springs from psychedelic thought experiments such as these. Maybe seeing concepts come to light through the bizarro filter of an AI photo generator can be a source of inspiration for our analog human brains.

As it happens, the state will soon be confronting a design challenge that could use a technologically enabled dose of outside-the-box thinking. The state seems poised to scrap its flag and look to the public for help as it dreams up something new.

What will this flag look like? Which beloved aspects of life in this beautiful state would look the best waving in the wind atop flagpoles from P-town to the Berkshires? Our state bird, or tree? A collage of cranberries or beans?

Let’s open our minds together, shall we? 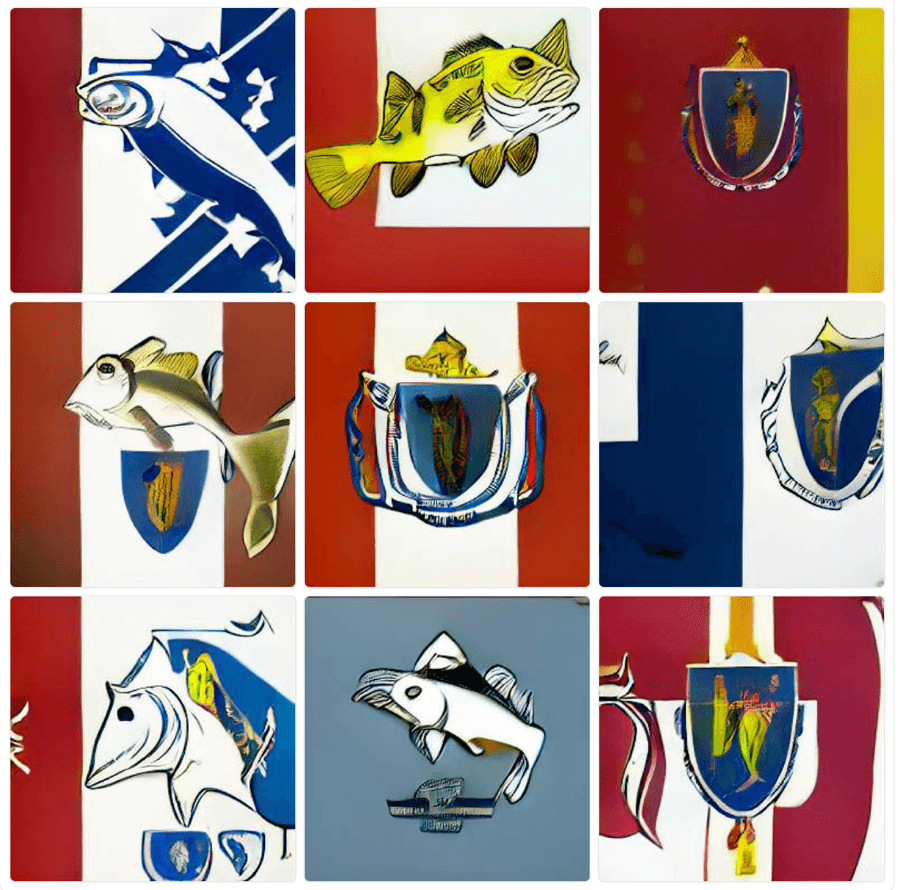 A state pottery icon, and frequent gift to dignitaries who visit the State House. How lovely. 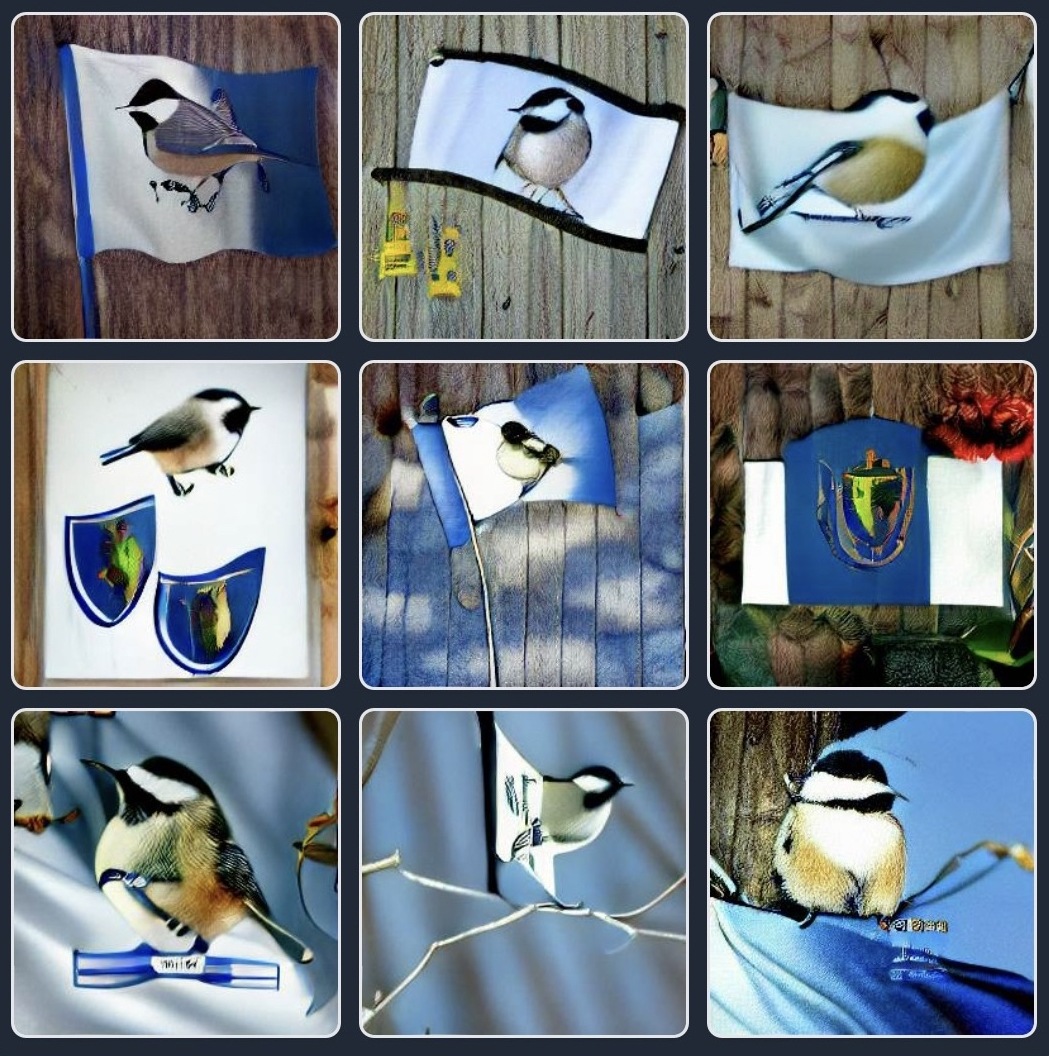 We love the cute little state bird, and doesn’t he look regal against that white-and-blue? 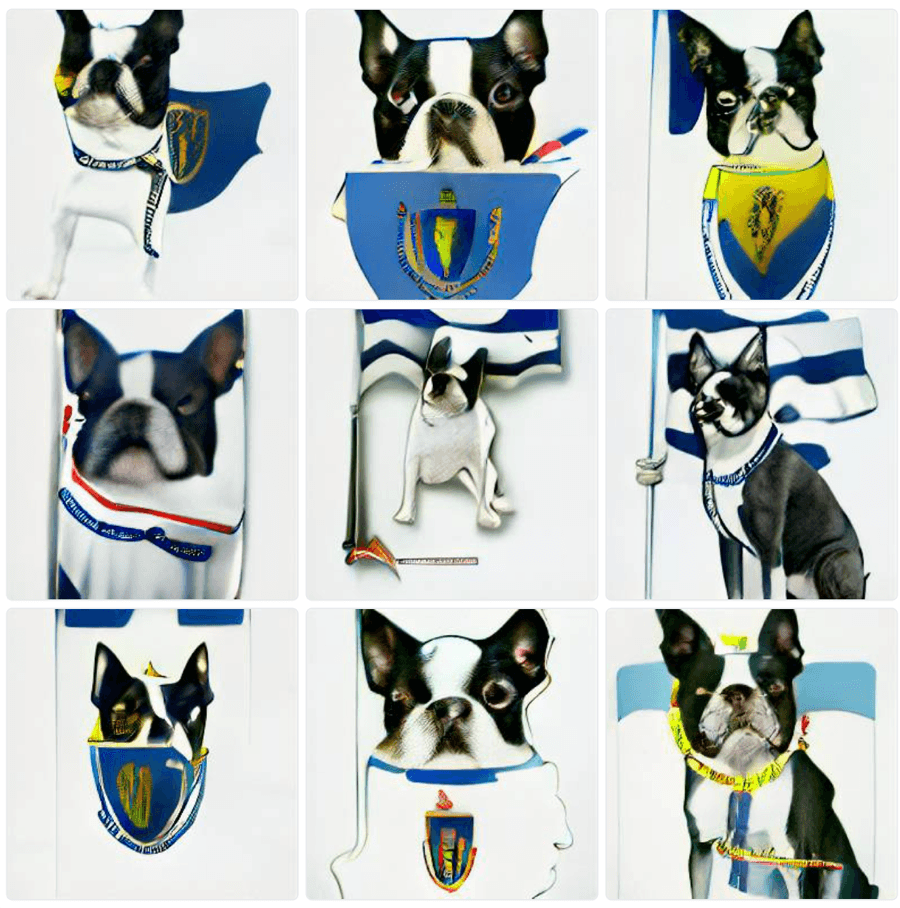 A good boy, but the AI does seem pretty fixated on the original seal in a way that state lawmakers no longer want to be. Interesting. 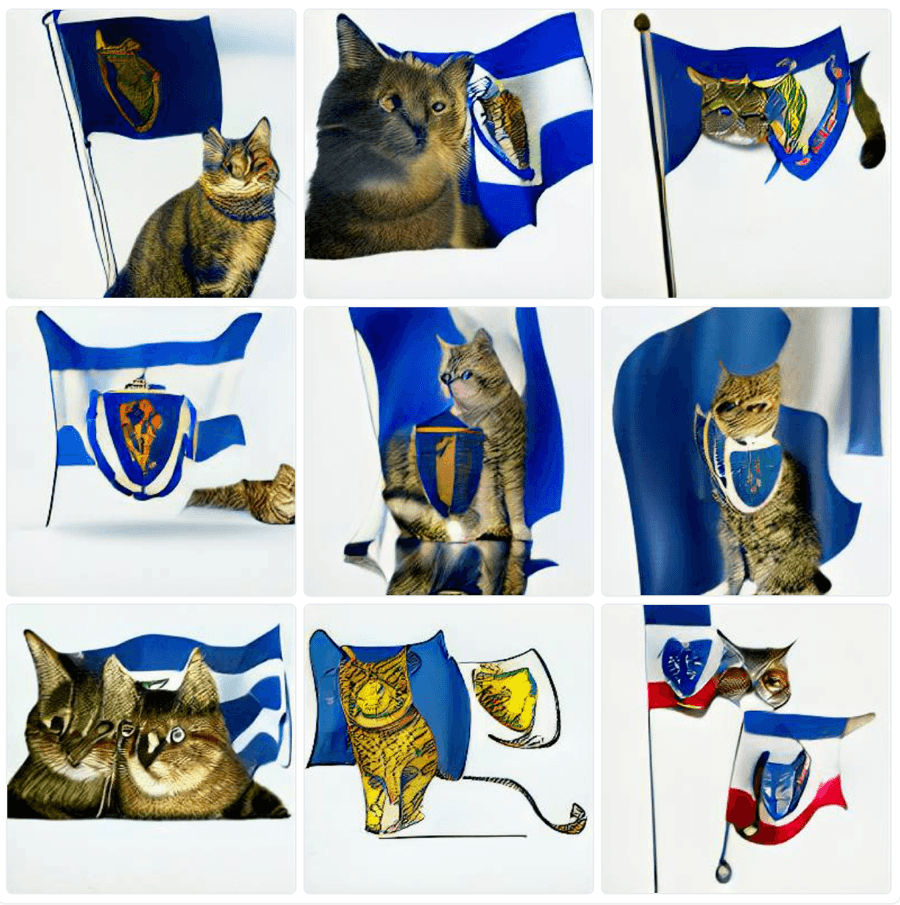 Not as much love for the official state cat around here as there is for the terrier, but as you can see, a lot of potential here. 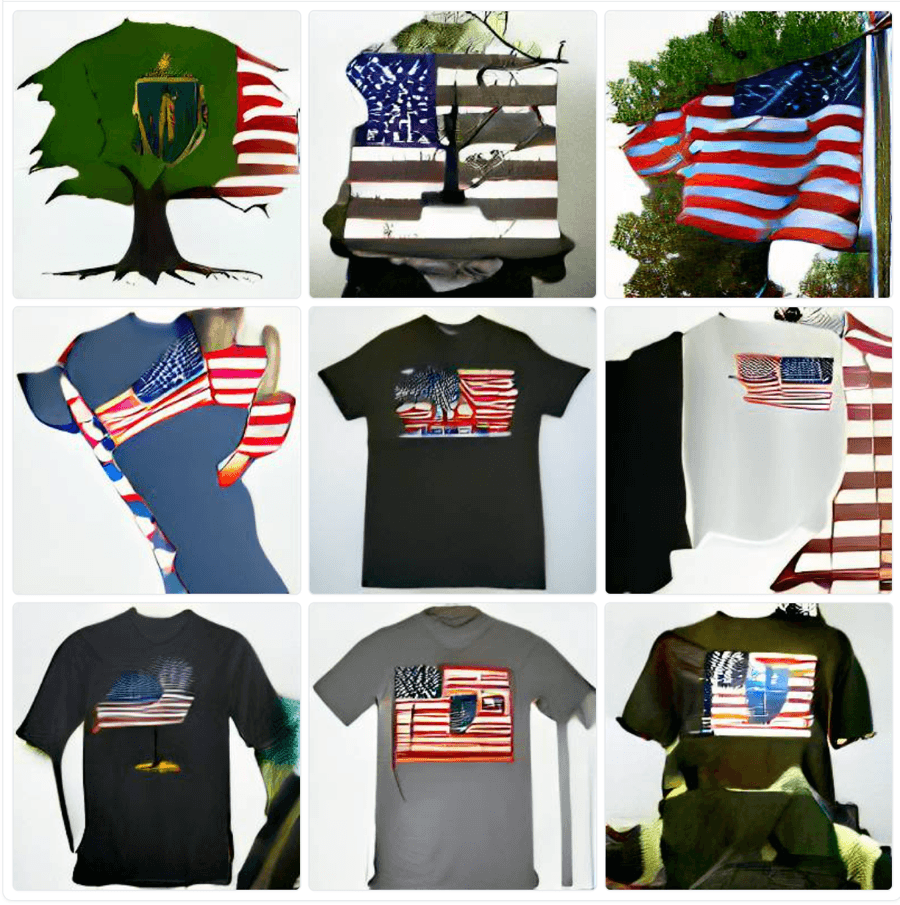 Not sure why the AI wants this to be an Old Navy T-shirt, or how we got the spooky Nightmare Before Christmas version of the state tree in the top-middle square. But alas. 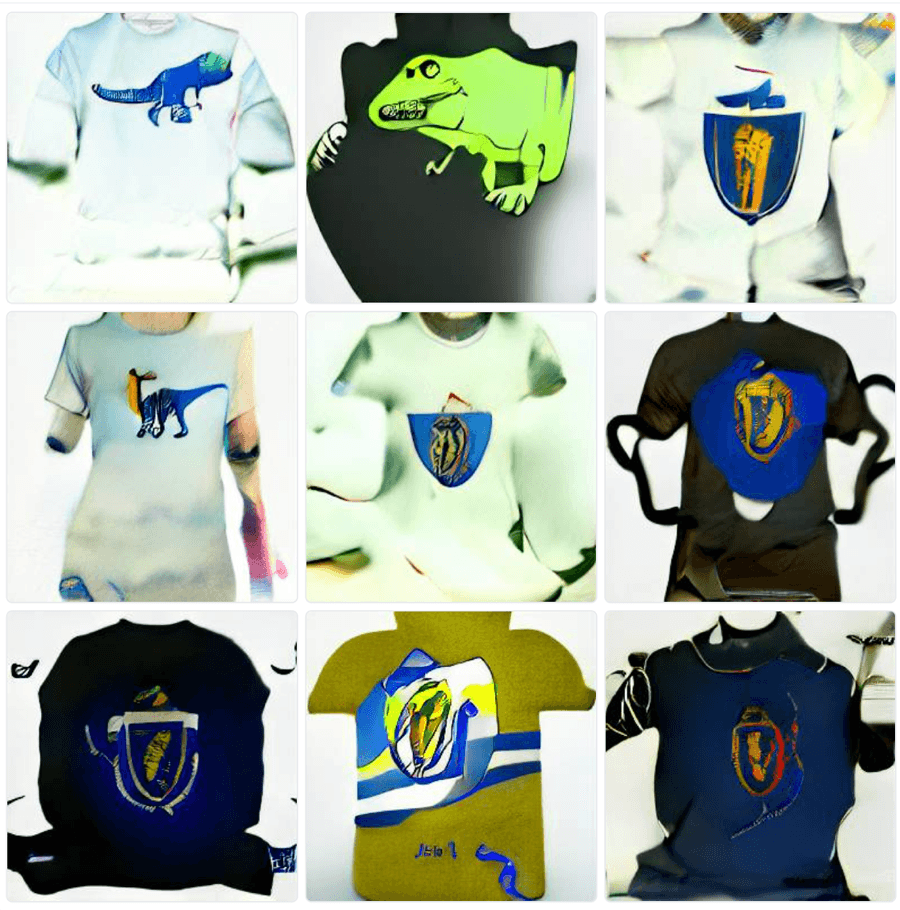 The newly declared state dinosaur shows a lot of promise as a candidate, in my opinion. Don’t rule it out. 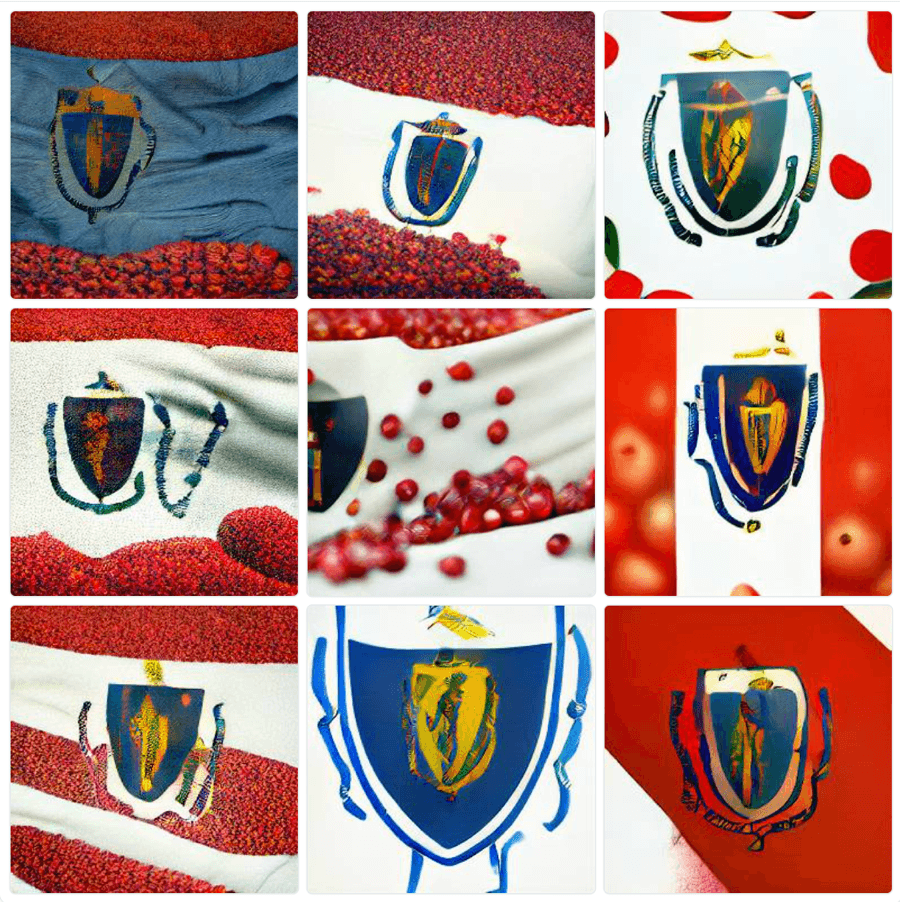 OK, it is becoming clear that incorporating the cranberry runs the very real risk of making the flag an ode to the novel coronavirus. Maybe it’s a no on this one. 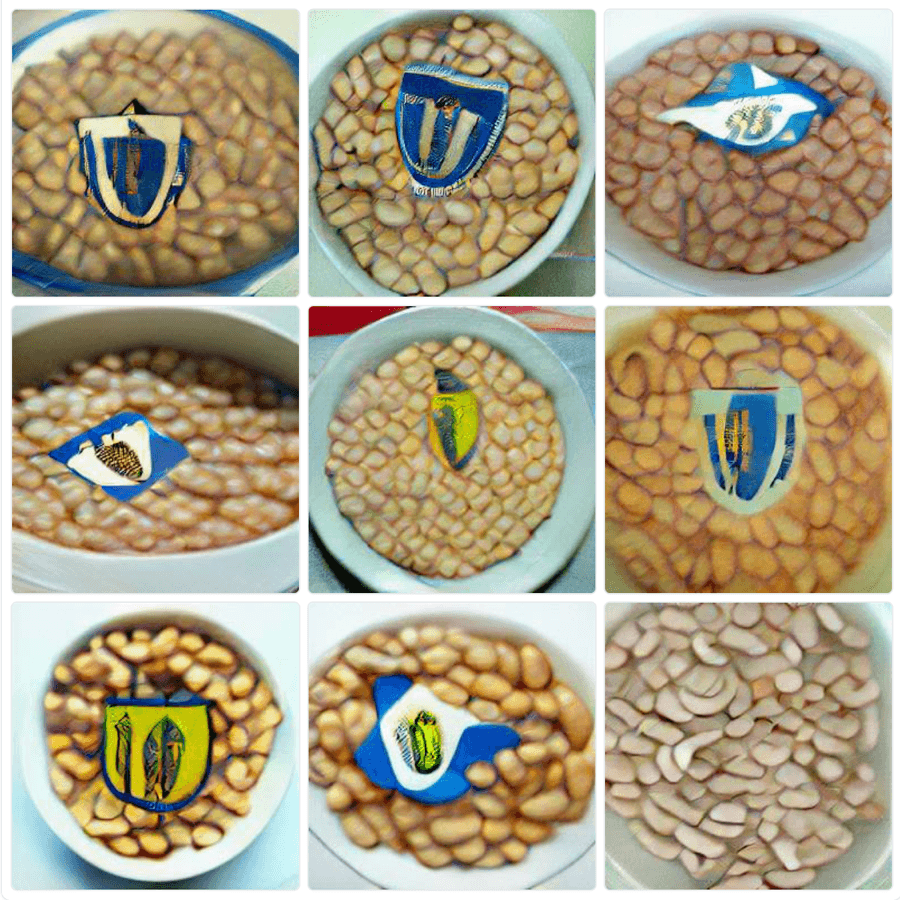 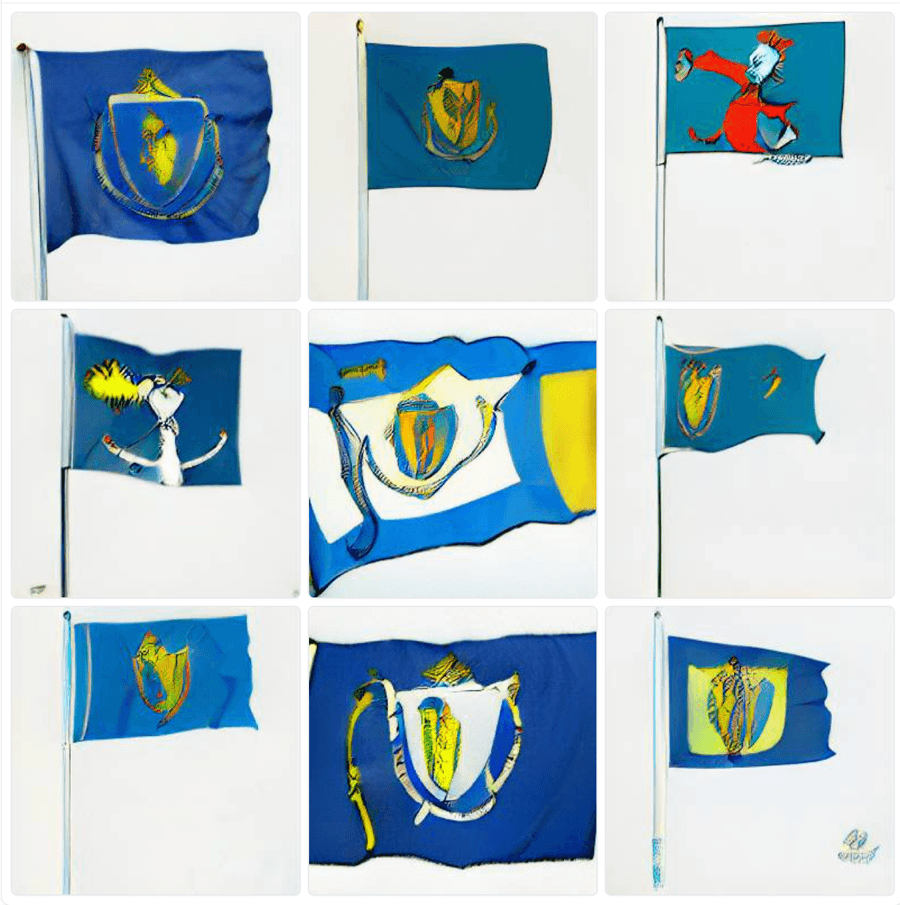 The center-left square makes a very powerful case for this one I must say. 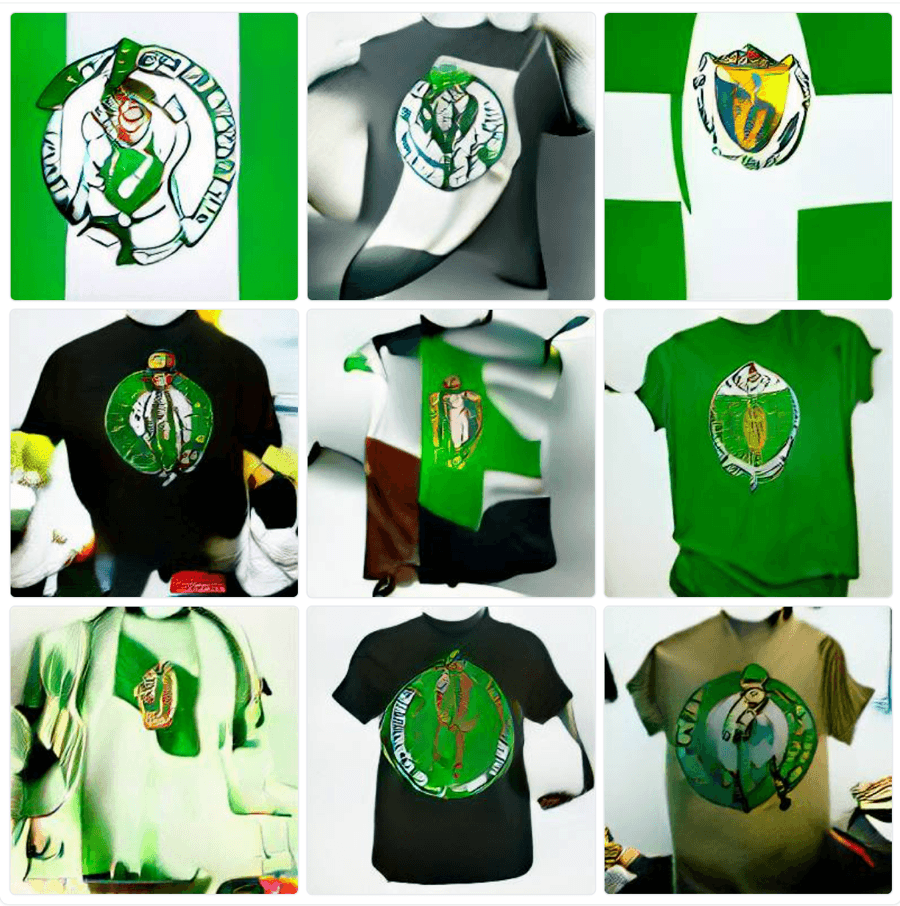 Again with the T-shirts. Maybe this can inspire some new C’s gear? 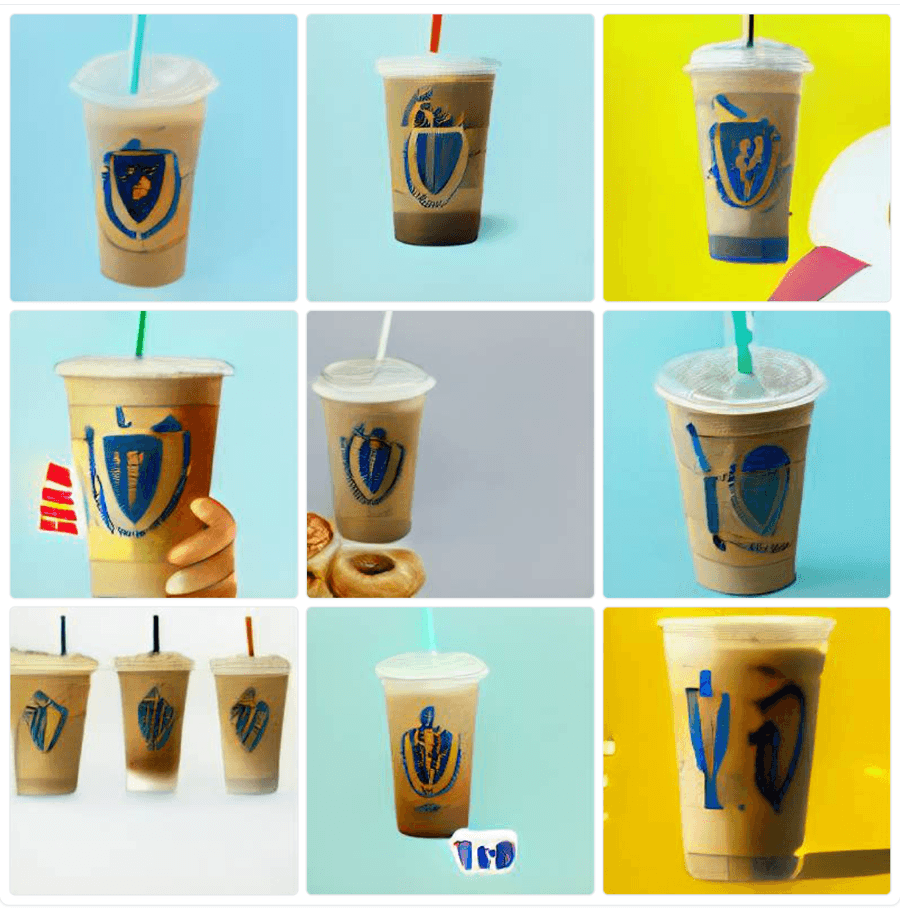 A fascinating look at how AI interprets the supremacy of the Dunks cup here when compared against the Massachusetts state flag. It’s clear where our loyalty lies. Maybe our new banner shouldn’t be on a piece of fabric at all, but on a giant plastic medium iced. Much to consider.