An indefinite shutdown in the heart of the city is just the latest blow. 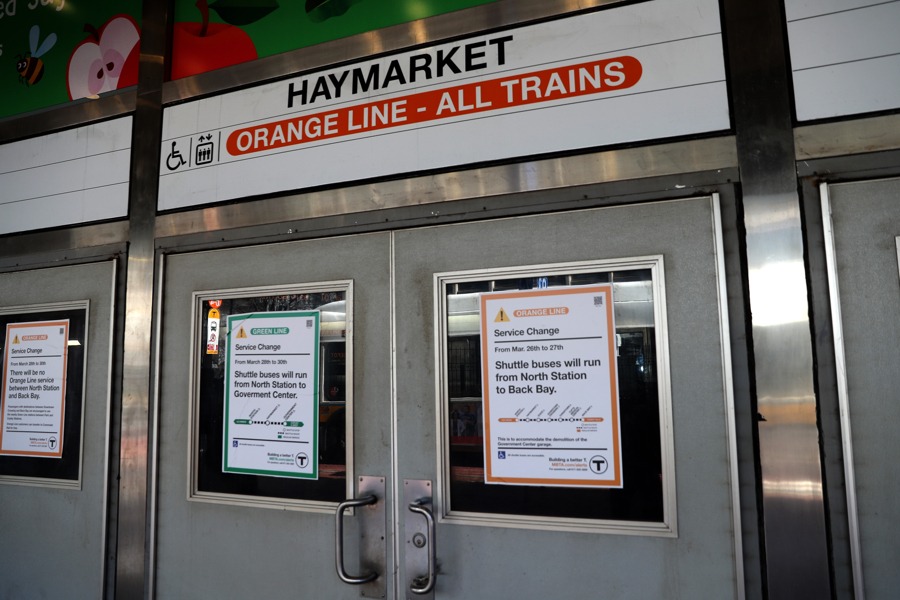 The Orange and Green MBTA lines are closed at Haymarket because of a building collapse of the Government Center garage at the garage site in Boston on March 29, 2022. Photo by David L. Ryan/The Boston Globe via Getty Images

To keep a close eye on the ways in which traveling on the T has gotten more difficult this year, it takes some serious stamina.

Derailments, runaway trains, busted escalators, drastic service cutbacks, closed stairwells, and an exploding battery (?!) have been the talk of the town of late. And now, to cap things off in this exceptionally disappointing moment in MBTA history, there’s an indefinite halt to train travel in the middle of downtown.

Let’s address the latest pain in the neck first. The T on Thursday announced that train service will no longer run on the Orange Line between North Station and Back Bay, and on the Green Line between Government Center and Lechmere. The agency took pains to point out that this particular shutdown was not strictly speaking its fault: Instead, it says, it made the decision to stop train travel there due to “structural concerns from deteriorated columns” beneath the Government Center Garage, which a private developer uncovered in the course of an ongoing construction project at the site.

Orange Line and Green Line Notice: Until further notice, Orange Line service is suspended between North Station and Back Bay due to structural concerns from deteriorated columns that support the privately-owned Government Center Garage.

This is, you’ll remember, the second time subway service has been suspended there this year. An earlier closure came after a collapse at the garage, which also disrupted service on the T.

So once again commuters hoping to make it to or through the heart of the city will need to hop on shuttle buses.

What’s more, police say they have closed street traffic in the area as well.

#BPDTrafficAdvisory: Government Center, West End and North End of Boston Due to MBTA Structural Issues Near One Congress Street https://t.co/DO5PEJLVVs

It would be a troubling enough headache on its own. But the announcement also comes after a series of setbacks on the T, chief among them the decision to implement widespread service cuts in the wake of a finding from federal transit investigators who found the T did not have enough dispatchers to keep a handle on things safely. Trains are now running on weekend service every day.

Calamitous as well were a series of additional recent disclosures and revelations, namely that a battery “failure” on the Orange Line appears to have been an explosion, that an(other!) escalator malfunctioned and suddenly reversed with passengers aboard (no one was injured this time), and that a stairwell at JFK/UMass has been closed, and will stay that way for weeks, just steps away from the site where a BU professor fell to his death on a condemned staircase. It also, of course, comes on the heels of a fatality on the Red Line, where a man was dragged to his death after getting caught up in a malfunctioning door.

Where does this all lead? It certainly doesn’t inspire confidence in the riding public. Is this rock bottom?