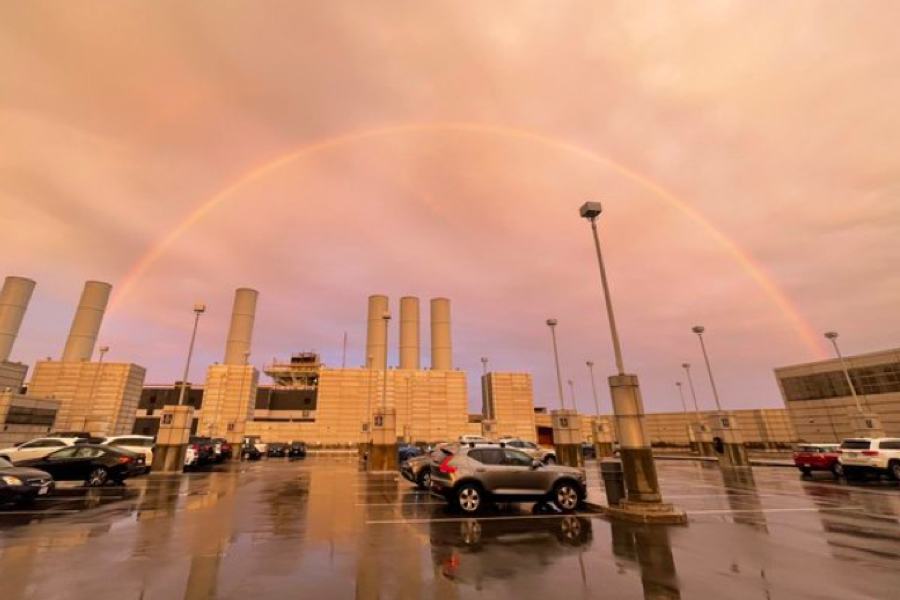 If you happened to peer out your window Monday evening, perhaps after (as this reporter did) finding your apartment suddenly bathed in an eerily beautiful light as the sun set behind the Boston skyline, you’d find a simply magnificent sight unfolding on the horizon: A gigantic, pristine rainbow, set against a backdrop of color-splashed twilight.

Ladies and gentlemen, a full on sunset rainbow (and, depending on your vantage, a sunset double rainbow) graced the city of Boston last night. And just in time for Pride Month, no less!

Just look at this thing, as captured masterfully by photographer Kevin D. Jordan from a rooftop.

Why bother climbing mountains when the rainbow-fueled inferno sunsets happen over the roof of your apartment building 🤷🏻‍♂️@universalhub #bostonweather #needham pic.twitter.com/hiVNcSBh2c

More evidence of what unfolded here:

Boston absolutely showing off right now with the most epic (double!) rainbow I’ve ever seen. pic.twitter.com/4NOhttuCbY

As far as how things appear to be going on the ground here among mere mortals, I think you could say the situation is…mixed. Not the happiest of times for all of us as individuals with close to zero control over the forces shaping our lives. You could call the accumulating situations across the country, put together, kind of a bummer, to say the absolute least!

So it’s nice to be reminded that Mother Nature can still deliver a real beaut off in the distance from time to time, and one perfectly timed to bookend a month of celebrations that were a bit more fraught than usual this time around. It is also, I have to say, nice to see a fully organic collective appreciation for Pride for which we do not have to thank Burger King or Raytheon Technologies.

But enough about all that! Let’s see some more! After all, after the stunning display, the internet was absolutely lit up with images of possibly the best rainbows the city has seen since the Fenway Park Double Rainbow of 2018. Here’s what we found:

Definitely one of the best rainbow pics I have seen recently…this was last evening in Boston pic.twitter.com/pDPkyOIhMb

Pretty cool rainbow over the Seaport District in Boston 🌈 pic.twitter.com/CmdqDPhYay

YO THIS #RAINBOW IN #BOSTON IS LIITTYY pic.twitter.com/1LBR2sZ8vs

Why yes, it is litty indeed. We could all use more litty things in life right now. And for that, sunset double rainbow, we thank you.