The Boston Pops will be back in action at the Hatch Shell for 2022. 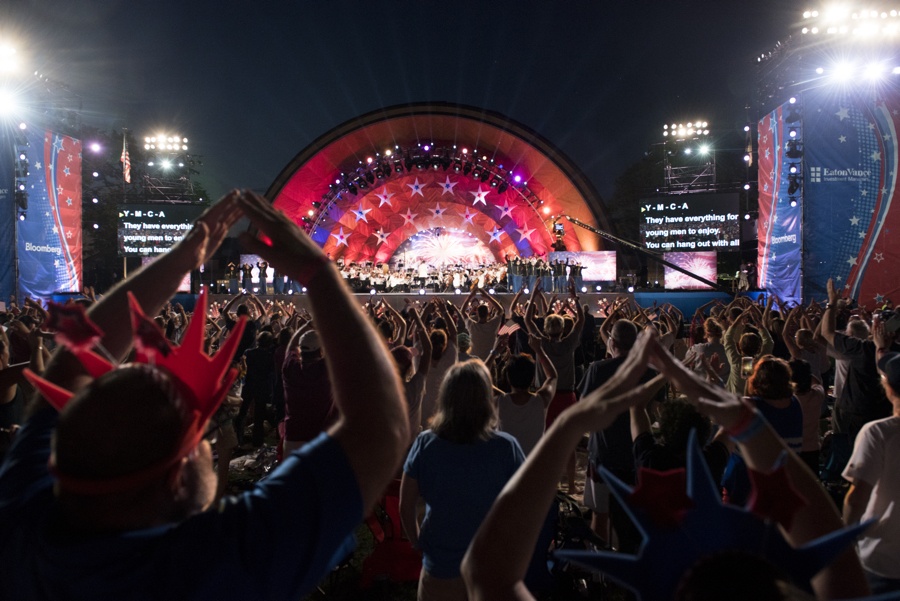 Mark Jackson and his partner Julie Russel perform the YMCA during the Fourth of July Pops celebration on the Esplanade on Tuesday, July 4, 2017. Photo by Nicholas Pfosi for the Boston Globe

At this point, after all the postponements and cancelations caused by the you-know-what, there aren’t many long-awaited returns left to celebrate. The marathon is back in its regular time slot. College graduations look like they ought to, and students who were denied that rite of passage have successfully crossed the stage in Cambridge and elsewhere.

But one big event has yet to return to its former glory around here, and it’s one of the city’s most beloved annual traditions: The Boston Pops will once again help us celebrate the 4th of July in Boston, live and in person, the way things used to be.

Keith Lockhart and the gang will once again take the stage at the Hatch Shell on the Esplanade, and hundreds of thousands are expected to pile into the city for what has long been recognized as one of the nation’s premiere Independence Day celebrations.

The #BostonPopsFireworksSpectacular is BACK! #KeithLockhart and the Pops will return to the to the Esplanade for the first time in three years for one spectacular #FourthOfJuly program → https://t.co/9KKidtVj6u pic.twitter.com/m4f0o55POU

In the years since the fireworks and performance went on hiatus very sadly but, I suppose, understandably, in 2020, the Pops have made do with what they could. Unable to do in-person events, they went virtual. Last year, the Pops took the unusual step of ringing in Independence Day not from the shores of the Charles, but at Tanglewood.

But all of that is behind us now. The Pops are back where they belong.

“We are incredibly excited to be returning to the Charles River Esplanade to present the Boston Pops Fireworks Spectacular and to play a unifying role in this great city and country by giving the people of Boston and beyond a wonderful reason to celebrate Independence Day with us,” Lockhart says in a statement. “There is nothing more powerful than music to bring us together as a community in celebration, so we are thrilled to bring you a fantastic lineup of July 4 guest artists—capped by an extraordinary fireworks display.”

A rehearsal at the Hatch Shell will be held on July 3. Typically, anyone is invited to attend—which had itself become a miniature tradition-before-the-tradition—but the practice run is closed to the public this year. Day of, gates to the parts of the Esplanade cordoned off for the event open at noon.

This will, it seems, be a year of mourning, remembrances, and tributes. As part of the program this year, there will be a segment dedicated to Ukraine, including a performance of the Ukranian national anthem to honor, says Lockhart, “the courage and perseverance they have consistently shown in their struggle for their country’s continuing independence.” Musical numbers from the late Stephen Sondheim, who died last year, are planned. There will be a tribute to David Mugar, the philanthropist and longtime funder of the Fireworks Spectacular, who died in January.

Remember, backpacks and other large bags of all kinds are prohibited, as are glass, cans, coolers with wheels and booze of all kinds. You can bring beach chairs, and claim a plot of grass with a blanket, so long as it isn’t larger than 10 feet by 10 feet. And if you plan on biking, consider yourself warned that bicycles are restricted in some areas, including the Oval and Island/Lagoon areas.

Here’s a pro tip: Consider stopping by Community Boating, Inc., the storied program based along the Esplanade, which is hosting a family-friendly event on the 4th, where it offers up reserved seating with views of the fireworks, and, get this, unlimited Polar seltzers.

Don’t feel like going out? You can watch the action on WHDH from 8-11 p.m, or stream it on Bloomberg.com. The fireworks start at 10:30.

The Boston Pops Fireworks Spectacular is BACK in Boston! Chaka Khan, Heather Headley and Javier Colon join @TheBostonPops on the Esplanade for the annual July 4th celebration.

YOU can watch LIVE on Bloomberg Television. Tune in on Monday, July 4th at 8pm https://t.co/QUdkl1UxBx pic.twitter.com/R3xbJIO1hX