One way to alleviate the problem: intertidal zone access. 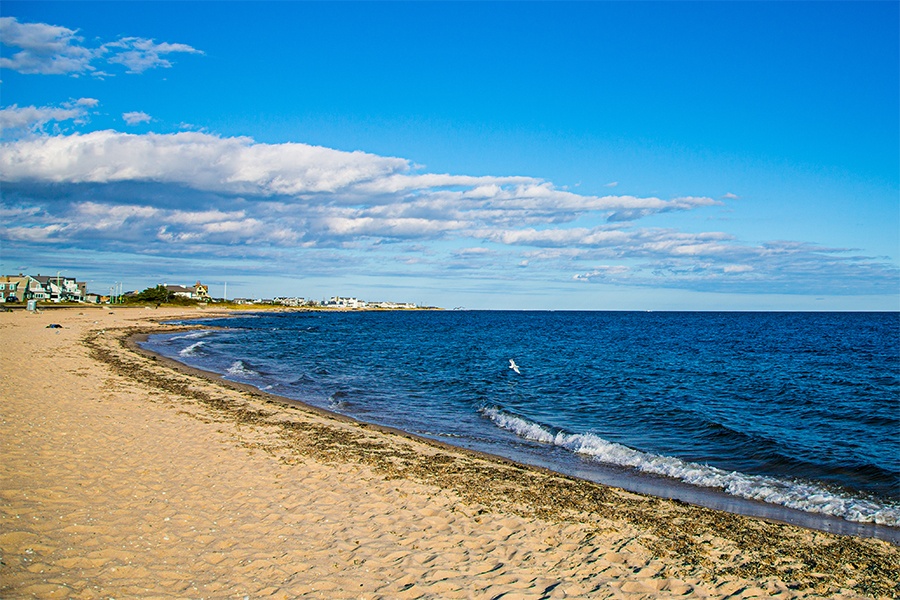 Massachusetts summers arrive with gifts—Red Sox games, maybe some free furniture from Jordan’s, and, of course, days to tan and splash along the shore—but also a particular frustration. Full beaches, full parking lots. Not enough shoreline.

In my memory as a kid growing up in the Bay State, this frustration sounds like the dull hum of an outboard boat engine, and it looks like a man in a green wooden skiff.

As kids, my cousins and I would head to Pine Island Cove, in Lewis Bay, to find a specific sandbar. The sandy spit, exposed at low tide, extended into a small channel. We’d run, spring from the sandbar, and achieve a rarified launch from dry land into water so deep we couldn’t touch the bottom. Inevitably, the telltale sound of the outboard would come in from the bay. The man in the skiff worked for Great Island, the group of private property owners who owned the land that rings the cove. He’d order us away, because that stretch of sand? That was private property.

But I think we (and you, too) should own that sandy spit in Pine Island Cove. And, maybe, we can. Our old liftoff spot belonged to a specific category of coastal landscape called the intertidal zone, which is the land between high tide and low tide marks.

In Massachusetts, private land can extend all the way to the mean low tide mark, a standard established in the Colonial Ordinances of 1641-47. As the tide goes out along a private beach, the wet sand exposed becomes private property. In every other coastal state except Maine, Delaware, and Virginia, private property ends at the high tide mark. In some states, like Texas, private property ends even earlier, at the vegetation line before the sand. In other words, the Bay State is a major outlier. And it’s no small quantity of our exquisite coastland that’s affected. According to a recent GBH report, only 12 percent of Massachusetts’ 1,400 miles of coastline is public and open to all 6.8 million residents, a situation exacerbated by the inequitable placement of those few beaches and limited parking.

Before I get into how the state could rectify this issue, I want to offer an important reason why it should: It just feels right. And this is not a sentiment unique to me—societies have been considering the concept that some landscapes shouldn’t be individually owned dating all the way back to the Romans, from whom we got the idea for collective ownership of national parks. In the years since, this notion has been expanded to include the ocean, in our understanding of international waters, and the ocean floor.

Even the Massachusetts intertidal law, though restrictive, reflects this notion, as it grants the non-beach-house-owning public certain exceptions. You can fish, hunt waterfowl, and navigate the waters—so long as you float or swim by without touching the bottom. But I think the law should also encompass what most people want to do at the beach: lounge or loaf or loll about or play in the sand.

There are more urgent reasons, beyond sentiments shared throughout history, to join the other states. For one, as heat levels rise in coming summers, ocean access will be less of a leisure and more of a necessary respite from oppressive urban heat. A public intertidal zone would create public land, albeit ephemeral and sometimes slim and still only accessible by existing public beaches, along every bit of the Massachusetts shore.

Of course, attempts at reform are likely to meet firm opposition, considering many past attempts have failed. In the 1970s, Senate President Billy Bulger attempted to legislate public access to the intertidal zone by adding “walking” to a list of land use exceptions. The Massachusetts Supreme Court struck it down, and then Bulger started a program, now obscure and unused, to buy back tideland from landowners and place it in the public trust. This cycle was initiated again recently by two local politicians who rep parts of the Cape and Islands: Sen. Julian Cyr and state Rep. Dylan Fernandes. Last year, the two filed a bill in the House and Senate that would add “recreation” to the list of public activities permitted in the intertidal zone, effectively allowing the public to use the tidelands at their discretion.

Mark Robinson, executive director of the Compact of Cape Cod Conservation Trusts, has been engaged with this issue since 1983, when he wrote a master’s thesis for the University of Rhode Island about the restrictive intertidal land laws in Massachusetts (Rhode Island, of course, allows unfettered public access to all intertidal lands). He lauds Cyr and Fernandes’ efforts, but says he’s skeptical that—much like Bulger’s attempt with “walking”—the incorporation of “recreation” would survive legal scrutiny. “I think they’re barking up the wrong tree,” Robinson tells me. “It would go straight to court, and the court would think it’s been well settled law for too long to be upset.”

If Cyr’s and Fernandes’s bill does fail, or is overturned, there’s still Bulger’s backup plan. Commonwealth or town governments could offer to buy intertidal zones or claim them through eminent domain. The latter might sound drastic, but the state has some successful history with dramatic seizure of coastline. In 1961, President John F. Kennedy created the Cape Cod National Seashore, Massachusetts’s most famous public beach, through eminent domain. And the park, which attracts over 4 million visitors, now creates over $638 million in economic benefit. But since Bulger’s initial push to purchase the intertidal zone in the ’90s, which ultimately failed because of a lack of government interest, neither the state nor town governments have pursued this avenue with any success.

Clearly, homeowners in beachfront communities have reason to be resistant to this change, considering private beach access was presumably baked into both their reasons for buying there, and the home price. But while the change certainly overwhelmingly benefits the beachgoing public, they actually stand to benefit as well.

I’m talking, of course, about climate change. As the world warms, ocean levels will continue to rise, and the sea will start claiming those homes before the state can touch their private beaches. This is where a public intertidal zone benefits private owners, says land use attorney Anthony Panebianco. “Because their land is private, and because they don’t have the Commonwealth protection on that land, it would be up to them to rebuild their sea walls or to move their properties back if they wanted to,” says Panebianco, who frequently works on land disputes along the coast. In addition to the compensation they’d receive if the zone was public, he thinks more variances would be granted to homeowners, and it would be the state’s obligation to protect against the creeping ocean.

Even still, some homeowners are likely to challenge any invitation for the public to sunbathe on their private beaches. Often, the privacy is one of the biggest perks for a monumental investment like oceanfront real-estate.

Kris Clark, a Town Councilor for Barnstable, tells me that, though there are some property owners whose “nature is to share that access [to the intertidal zone],” she can sympathize with their opposition. “[Property owners] are like, ‘Hey, we pay a lot of money in taxes to have property that runs to the water, and we prefer to not have that impeded with public use,’” she says.

But Massachusetts, in many respects, is a beacon of progress. Joining the other states in allowing the public to access tidelands seems to me like a natural development, and not that radical. The Commonwealth would finally be congruous with a commonsense notion, one that most of the country has already put in place—beach access should be treated like the universal treasure it is, with access for all.