Whales, the Newest Scourge of Seafaring Bay Staters, Are Not the Enemy

Fear not these blubbery beasts (but try to stay out of their way). 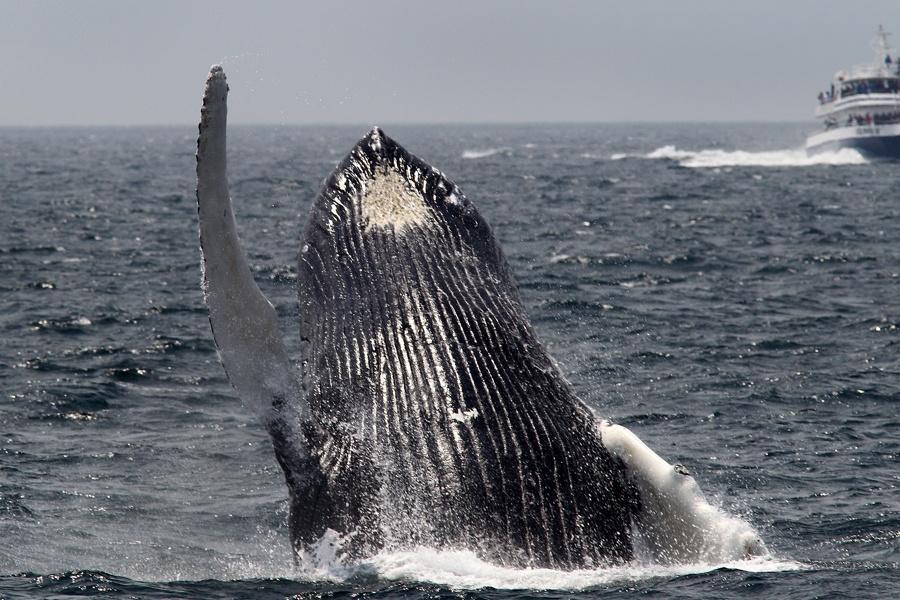 For generations, as we waded out into the Atlantic, or steered fishing vessels out of the the harbor, we scanned the skyline for fins. These, we have learned, portend danger—the toothy jaws of great whites lurk beneath them. Vigilance is advised.

But lately a new scourge of the sea has grabbed Massachusetts’ attention: dastardly whales.

The news reports about a trio of young whales flopping around Plymouth, an ill-at-ease press conference, and a stunning video encounter that emerged this week, suggest that it is not only dorsal fins of doom we must fear, but the blubbery bellies of bedlam. Not Jaws, but Moby Dick.

New video shows what it was like for the people on board a boat off the coast of Plymouth as a whale breached and crashed on to it. https://t.co/7IkoEYKqoI pic.twitter.com/jYWwgDwXzt

The boaters who got up close and personal with the humpback were not injured, and the boat itself was intact enough to make it to shore unassisted, so very little harm done here. The whale has since been seen swimming around, so hopefully wasn’t badly injured either.

There may well be more where that came from. Experts who gathered in Plymouth Friday said that boat-vs.-whale encounters are, of course, quite concerning. “The interactions that we’ve seen lately jeopardize the safety of everyone involved,” Regina Asmutis-Silvia, executive director of the Whale and Dolphin Conservation, said in a press conference. “Even hitting a car with a deer is a bad idea. Think about a fiberglass boat with a whale.”

But before we start rekindling the Commonwealth’s long-ago zeal for harpooning, bear in mind the consequences of coming for these massive sea creatures should fear get the better of us. Some of them, notably including the Northern Right Whale, are perilously endangered, and Cape Cod Bay and the Stelwagen Bank are both critically important for their survival.

Instead, the officials said, practice safe boating: Don’t follow the whales around. In fact, never get within 100 feet of a whale if you see one. Be on particularly high alert right now, due to an apparent abundance along the coast of both adolescent whales, who can be unwieldy, and pogies, a fish they like (if you see a lot of the fish in one place and want to minimize your chances of getting whaled, flee). And, as a general rule, do not put yourself in harm’s way for the ‘Gram, especially on the open seas.

Beyond the conservation concerns, and despite the apparent danger, whales are also not to be feared, but respected—even revered. For years I’ve been urging anyone who hasn’t done so to get themselves on a whale watch ASAP. There is simply nothing like being packed to the gills with spectators on the bow of a boat, all of you clapping and cheering every time one of these suckers leaps in the air and belly flops their mammalian heft into the sea. So long as you’re not underneath them when it happens, it rules.

In the end, even the supposed victims in the video seen across the seven seas are urging caution, and admiration, for these important creatures.

“We all felt bad for the whale,” the boater told WCVB. “Wrong place at the wrong time for all of us.”