Q&A: Dart Adams on Why Danish Rapper Sleiman’s Life Story Is One We Need to Hear

The Boston writer says Instead We Became Evil, which he co-wrote with the artist, breaks the mold. 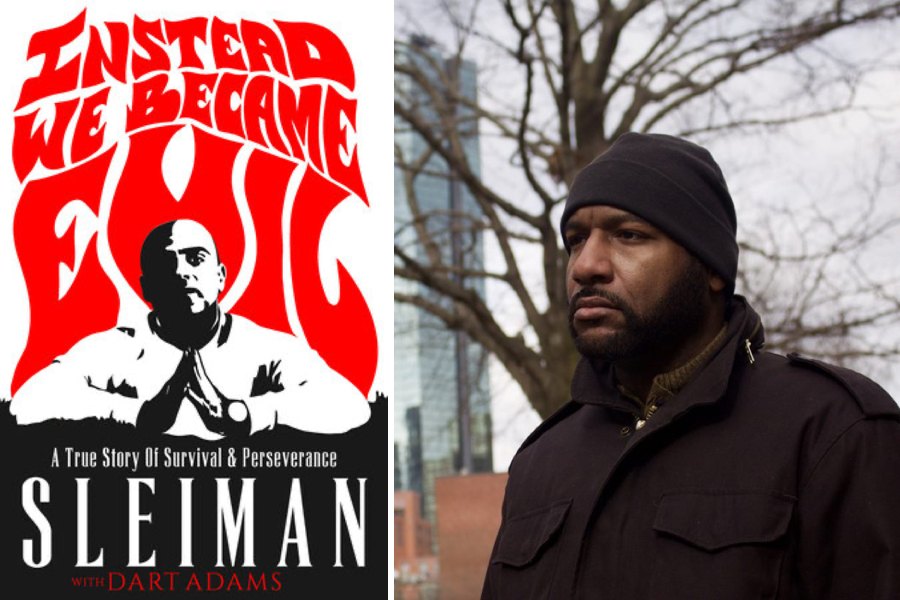 For many years now, journalist and Boston contributor Dart Adams has made a name for himself as a chronicler not only of Boston culture but of the hip hop community from coast to coast. For his latest project, however, he has turned his attention a bit further from home, to the sordid yet, he hopes, inspiring tale of a Danish rapper whose rise from gang life infamy to stardom has made him a sensation overseas.

For Instead We Became Evil: A True Story of Survival and Perseverance, out this week via Penguin imprint Kingston Imperial, Adams collaborated with the artist Sleiman to share his story with the world, from his humble roots as a Lebanese immigrant, to his youth spent with the fearsome Bloodz gang, and on to his public break with organized crime and resurgence as a chart-topping performer. He is now finding fans online in the U.S., who connect with his work in spite of the language barrier (and who may also know him for his legal spat with the American rapper 6ix9ine).

To report and write the book, an update to an earlier memoir Sleiman published in Danish in 2012, Adams spent months getting to know the rapper in phone calls and WhatsApp chats. Despite their vastly different upbringings, Adams says he found ample similarities between Sleiman’s life and that of his experiences in Boston.

“I’m just fascinated by his life story and all the things he’s survived and dealt with,” Adams says. “A lot of it echoes what first- and second-generation immigrants that I knew growing up in Boston faced: coming to a completely different culture, being a Muslim in a white country, balancing the worlds of your home life versus the streets, dealing with police, the school-to-prison pipeline, racism, xenophobia.”

We sat down to chat about why he believes Sleiman’s story is one American audiences need to hear.

Who, exactly, is Sleiman? And how influential is he right now?

Sleiman is a Muslim immigrant, a Palestinian refugee who left Lebanon as a child with his family and emigrated to Denmark. He’s a huge deal in Europe, infamous since he was a teenager because he started one of the continent’s biggest gangs, and then left it alive, which is insane. Then he became a businessman and entrepreneur outside of it—a legitimate one—and entered the music industry and started making hits.

He was always seen as a gangster, and he always wanted to change people’s perception of him. When you’re infamous, it takes a while to get people to think of you as something other than a bad guy or a criminal and take you seriously, and to deal with the scrutiny and carve out his own space. It took him years of making music for people to say, ‘Alright, he’s legitimate.’ He’s now one of the most popular and most listened to Dutch-language rappers on YouTube and streaming platforms, and he’s hugely influential as someone who came to Denmark with nothing and, despite all the strikes against him, has become an inspiration to a generation of Arab youth and the MENA diaspora. Even once you’re in the system, this is not the end. You can actually take control of your life and turn it around. You don’t have to be what people think you are.

What’s different about his story? What will American audiences get out of this?

Most books about people with his background follow the same script. It’s usually a refugee story, it’s a story of violence and perseverance and what have you, but they are rarely somebody with Sleiman’s background: a kid who grew up in the hip hop culture, entered the world of entertainment, and became an icon in that way. That’s very rare.

Also a North American audience typically has no idea there’s a gang problem in Denmark. Or that, for example, behind the cannabis industry in Amsterdam, where it’s still illegal, there was an underground black market that gangs were all fighting over. He breaks all of that down in the book.

Tell me about the title, Instead We Became Evil. What’s that about?

When he came to Denmark as a child, the language that he learned was violence. He learned that from his father, something happens to his mother, and he deals with a lot of adversity from his own community. In order to deal with it, he has to become a different person. In order to survive in an environment that was infested with gangs, people who were racist and xenophobic, police brutality, the mentality was he had to become evil in order to feel any modicum of protection. He was always in survival mode.

That’s a story we’ve heard from a lot of American hip hop artists, too.

His story really does mirror stories we’re familiar with. There are other memoirs by people like Rick Ross or Gucci Mane, and they all share come-up stories that are similar to Sleiman’s. I want his book to be in the same category. Actually, if you look on Amazon, the book is in “survival biographies” and I’m like, ‘Why can’t it be with the rap books?’ A lot of the time, because he’s Arab and he’s from the MENA community, publishers won’t even take on a book like this because they think there’s no audience for it. So it’s big just to put this out. Again, I think this will resonate with people from any background who’ve had adversity shape their lives. That’s a universal story to me.

Does it surprise you that his music is making its way overseas?

If you go on YouTube, you’ll find lots of reaction videos to his songs or his videos. In the age of streaming, people listen to a lot of music that isn’t in English: They’re listening to K-pop, J-pop, and Afrobeats. They’re listening to music from France, Nigeria, Senegal, all over. So Sleiman has millions of views, and the comments are coming in from Croatia, the US, Lebanon. It kind of blew up on there.

Has he always seen hip-hop as a vehicle for getting his story out there to an international audience?

Yes, that’s why he wanted the book to be optioned in North America. When you have a unique story like this, it can resonate with so many people and make them feel like they’re not alone in the world. I think of the Muslim kids who grew up in the inner city, and there are a lot of them in places like Michigan and New Jersey and Philadelphia. These are sizable communities, but they haven’t had representation. Look at what happened when Ms. Marvel came out. People were very excited because finally they got to see themselves on screen. Whenever you try to pitch a book the first thing they ask for is comp titles because they want to gauge how it will do, but there was nothing to compare it to. It was like, good luck. That’s why this book is so important.