His word-on-the-street videos about such topics as the Market Baskets on Boston Road in Billerica and the state's many beloved dinosaurs have been blowing up online, and with good reason. 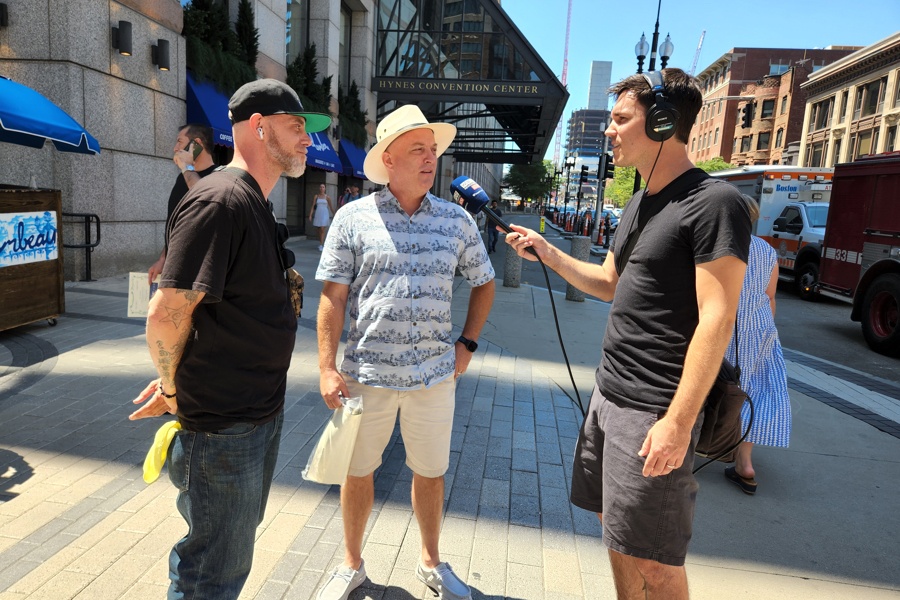 It’s no secret that Bostonians love speaking their minds. Whether it’s the lovable cranks on your neighborhood Facebook page, the chatty barber mercilessly roasting his clientele, or the guy loudly arguing with his girlfriend on the phone at Downtown Crossing, this is a city full of people with something to say.

That’s why Boston is such a goldmine for pristine word-on-the-street interviews. Give any random pedestrian around here a platform, and you’re likely to hear something profound, alarming, or gut-bustingly hilarious. It’s the way we are.

There is, at present, no one who understands this phenomenon better than WBZ NewsRadio’s Matt Shearer, a seasoned interviewer of these sages of the street who’s been collecting pearls of wisdom in this way now for over a decade. If you’ve been online and are attuned to the world’s obsession with all things Boston, perhaps you’ve seen some of his work lately in the wilds of the internet, where clips posted to TikTok have been reaching millions in recent months.

Take, for example, his dispatch on the closure of a Market Basket, one of three, all on Boston Road in Billerica. A highlight: When a guy in an SUV proclaims: “I don’t like change. I told my kids the dinosaurs didn’t become extinct by accident. They saw the future and said ‘Screw this. Let’s go to the tar pit.'” (NBC reporter and Twitter personality Ben Collins called this “the most Massachusetts news report of all time.”)

Or this, an exploration of Bostonians’ divergent views on the Seaport (Highlight: “Give it time, it’ll look like crap in a coupla years.”)

Or this one, a report on Massachusetts’ many dinosaurs that veers decidedly off the rails. (“Just like Tom Brady with the Patriots, no. My idol is God, honey.”).

For Shearer, a veteran of 96.9 Boston Talks and The TJ Show on 103.3 Amp Radio, all the attention of late has made him wonder why he’s been limiting his anthropological studies of bizarre Boston-ness to radio all this time.

“I’ve been doing this for years, but only recently started posting it on TikTok, and I’m kind of kicking myself for not putting stuff up sooner,” he says. “I’ve had some absolute gems that I’ve bumped into that were only broadcast on air.”

WBZ made its foray into TikTok about a year ago, and a half-dozen reporters contribute to the station’s video offerings on the app. But it’s Shearer, with his sometimes surrealist style and  knack for tapping into the peculiarly popular vein of Boston-based comedy, that is now regularly finding himself in the viral stratosphere.

Occasionally, the videos are more sketch comedy than vox pop. His first mega-hit, he says, came back in April, when he posted a video about sampling Boston’s “most iconic cafés,” in which he dropped in at Dunkin, Dunkin, Dunkin, Dunkin, Dunkin, and Dunkin. He was astounded by how many people tuned in—1.7 million and counting, with many, many more watching on Twitter and Instagram.

The real mastery, though, is in just letting people talk and seeing what unexpected turns their opinions will take.

“Nothing is funnier than reality,” Shearer tells me. “It’s way more fun and more rewarding to find people who say something that I could never come up with on my own. When I get a reaction that I would never expect to hear from somebody, that’s fun for me.”

Take the time, for example, when he queried locals for their thoughts on who’s allowed to say they’re from Boston, and met a dude by the Common who told him, three-inch long cigarette ash waving in the breeze, that he was shocked when he found out his wife, who he’d thought was from Boston, had “Newton” on her birth certificate.

“He checked her paperwork!” Shearer says. “Like, that is something only a Bostonian would care about. And that’s kind of why I love Boston so much. It’s just not like anywhere else. You either love it or you hate it, and the more vocal the haters are, the more passionate the Bostonian.”

All the attention has vastly expanded his reach. Radio syndication services have picked up his dispatches en masse, and you can occasionally hear promos for Shearer’s work on fellow iHeartRadio station Kiss 108. A few weeks ago, Jimmy Kimmel followed him on Twitter. And all the while, viewers have been flooding to WBZ’s TikTok account awaiting the next masterpiece.

That was not necessarily the plan, says WBZ NewsRadio assistant programming director Jay Borselle, when he came up with this new TikTok strategy, but he’ll take it. “I see it as an extension of what we do,” Borselle says. “And he has really been able to hit it out of the park. You could create a sitcom with a lot of those characters, they’re so funny.” He says it’s helped the station, a 100-year-old staple of local AM radio, find a new audience of younger viewers who might not otherwise tune in.

By the way, for fans of the Shearer videos, there is more where that came from: For every segment, he says, he posts a second version, packed with even more beautifully strange commentary, exclusively for the radio broadcast. Consider it a bonus for the real Bostonians who can tune in to AM 1030 from home.

In the meantime, he’ll keep mining our sidewalks for audio/visual gold, for an audience that’s a lot more global than he’d ever imagined. Why? Simple: “The Boston stereotype is funny,” Shearer says. “Bostonians aren’t ashamed of that. They’re proud of it.”