How to Get Around without the Orange Line During the Shutdown

Thanks to a monthlong disruption starting August 19, you'll need to plan ahead. 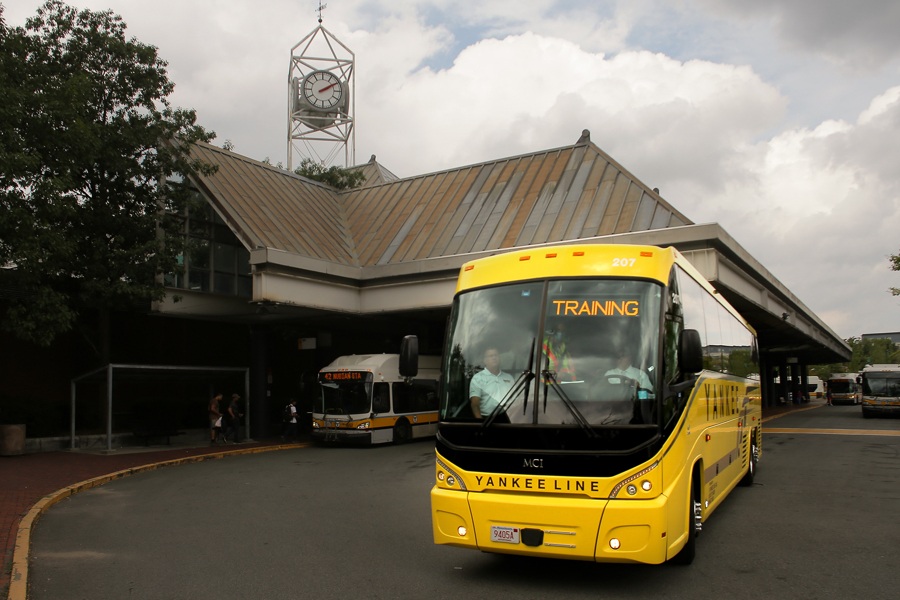 The T has been conducting test runs with shuttle buses to prepare for the shutdown. Photo by Lane Turner/The Boston Globe via Getty Images

Here it comes, folks: The big one. An unprecedented shutdown of the entire Orange Line is just around the corner, set to kick in on Friday, August 19 at 9 p.m., and continue through September 19.

Long-term, we’re told this will be good for the beleaguered segment of the MBTA, because it will allow the T to do five years worth of repairs in one shot. Short-term, though, it’ll be a doozy both for the thousands of commuters who rely on it, and for just about everyone else in Boston who plans on getting around given all the disruption it’s all but certain to cause.

Ever since the closure was announced on August 3, transit officials have been scrambling to plan, and to let commuters know what’s headed their way (even as of this week, apparently, public signage about the impending shutdown had been lacking).

As for how complicated this all is and will be, consider the diagram the T created to explain it to people, which should be easy for all to comprehend and neither mystifying nor dumbfounding:

There are ways to avoid this. You could, for example, plead with your boss to let you work from home, as officials have urged workers to do. You could try to travel during off-peak times to avoid rush hour. Or you could, as officials have astonishingly begun saying, “avoid the region altogether until the diversion period has concluded.”

You could also… move?

If that’s not in the cards, what follows are some plain-English tips for getting around. But first, a little light music.

We were on our way home from a jam in Boston and had a message for Governor Baker and the Orange Line shut down: “Charlie (Baker) on the MBTA”#boston #orangeline #mbta #publictransit #orangelinefire #30dayshutdown #charlieonthemta pic.twitter.com/UqDcN4TPNZ

A massive effort to flood the streets with as many as 200 shuttle buses is underway. As one official put it, we will “literally have every accessible bus east of the Mississippi in service.” The T will run two shuttle routes from Oak Grove to Government Center and from Forest Hills to Copley, with multiple stops along the way. It will not be stopping between Tufts and State, so you ay have to hop over to the Green, Blue, or Silver lines to complete your journey downtown. To keep shuttles from getting snared in gridlock, new temporary bus-only lanes have been sprouting up along the route. Some good news: The shuttles are free.

Disabled riders who live within 3/4 of a mile of the Orange Line can also opt for free paratransit service provided by The RIDE.

If the shuttle buses end up too crowded, or if you’d rather avoid taking part in this large-scale experiment day after day, you can always opt for hopping on existing MBTA bus routes instead. Study up, you might just save some time (or some headaches).

The T has also urged riders along the Commuter Rail to hop on those trains, instead. Trains will be stopping at Oak Grove, Malden Center, North Station, Back Bay, and Forest Hills. That means you’ll have to time your commute with the existing Commuter Rail schedule, rather than simply hopping on the Orange Line and waiting for the next train to pull up. Plus, it also means potentially dealing with crowds that are much larger than normal. The good news: If you have a CharlieCard or CharlieTicket, you won’t have to pay for the privilege, so long as you’re within Zone 1, 1A, or 2. Just flash your card and you’re good to go.

One way to cut down on the chaos of the T’s mitigation efforts is to make your way to a nearby T station. How feasible that is, of course, will depend on where you live. But particularly if the other options don’t work for you, a brisk walk, bike, or bus ride to the nearest Green or Red Line stop might be your best bet.

This will, however, not work for you if you live on the Green Line’s northern reaches, because it, too, will be shuttered and replaced by shuttle buses between Government Center and the new Union Square stop from August 22 to September 18.

Now might be a decent time to consider digging that old bike out of the basement and pedaling to work. Be safe, as Boston roads can be treacherous on their best days, and given the additional traffic on the road, there will be more cars with possibly even angrier drivers out there with you. Plus, officials have noted that the shuttles are a little bigger, and have bigger blind spots, than MBTA buses, so that’s something to keep in mind. The city said in a statement it will be adding pop-up protected lanes “on Columbus Avenue and Stuart Street between Clarendon Street and Church Street and on Boylston Street in the Back Bay from Dartmouth Street to Arlington Street.”

Don’t have a bike? You can also hop on a Bluebike. The city announced this week that it’s making free 30-day passes available to help people weather the storm, which can be used for unlimited 45-minute rides.

Something to watch out for, however: If a lot of commuters are heading from Orange Line adjacent areas north and south of the city, a whole lot of Blue Bikes may be heading in the same direction at the same time. Bluebike stations, you’ll recall, each have both a limited number of available bikes in stations, and spaces to dock bikes after a ride is complete, which means Bluebike stations downtown might be overburdened. This can already be a problem even on regular not-orange-line-shut-down days:

Orange line isn’t even closed yet and there are not enough bikes around Roxbury crossing @RideBluebikes @MBTA @MayorWu pic.twitter.com/06fqJRiT3r

The city says Bluebikes staff will be on hand to address this, and you can also track how full the stops are in real time on the Bluebikes app.

Look at you, moneybags! If you’re in a pinch, Ubers and Lyfts will gladly ferry you to your destination for a fee. Just beware of surge pricing, which will likely skyrocket at peak times during the shutdown.

Transit officials desperately do not want you to drive, but there’s no denying that’s what a lot of you will do. Just be warned that you will not be alone, and that the shuttle buses will cut down on drive-able lanes in many areas. As a result, transit officials are forecasting significant increases to traffic, well, everywhere:

Map showing where congestion is expected from Orange and Green line shutdowns😱…. pic.twitter.com/mw2ONlRPT3

(The map, come to think of it, sort of reminds us of something.)

Don’t forget that the currently ongoing weekend closures of the Sumner Tunnel, which has already slowed traffic in the area.

And a little word to the wise: Given all those additional cyclists on the road, be extra mindful of them. You could save a life!

Consider getting into podcasts

A little something to keep yourself occupied in the slog might be in order. We like Disgraceland.