Why Is Marblehead’s Mascot a Magician?

Team sports icons are supposed to bring spirit and pride to the school community. But not in my town. 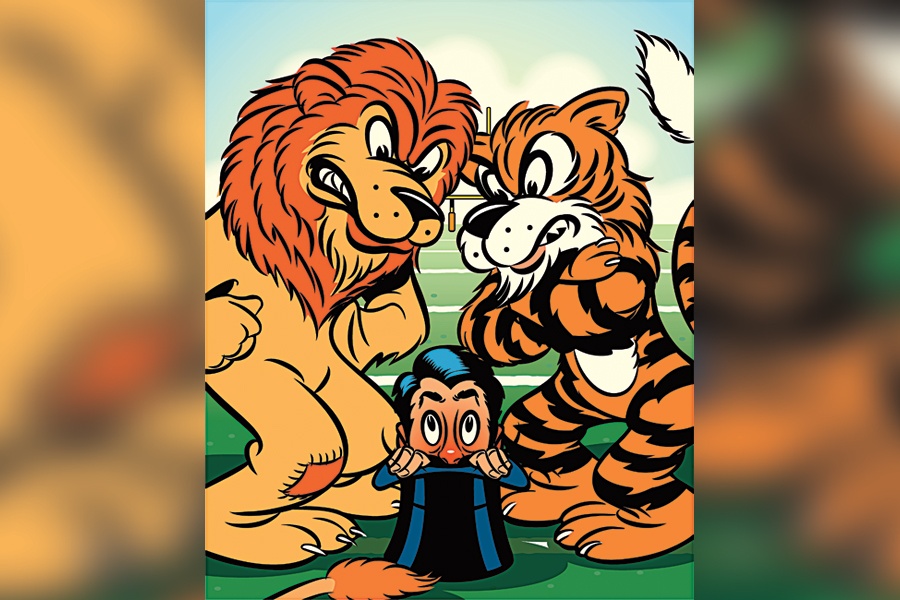 I’ve lived in Marblehead for eight and a half years, and even though I still don’t have a boat hull on my front lawn, I think I’ve fit in reasonably well. I’ve gone to Town Meeting, coached T-ball for seven seasons, and try to keep my crabgrass somewhat mowed.

How awful is it?

It’s my own fault. I never considered researching the name, like I did with property taxes and foundation integrity. But soon after we moved in, I was driving through neighboring Swampscott and saw a sign emblazoned with the phrase “Go Big Blue.” At first, I thought it was advertising a festival or sending good wishes to a sick, beefy resident nicknamed Blue. Then I learned that it was the name of its high school sports mascot. Dumbest name ever, I thought.

That was before I learned about Marblehead’s. I just assumed it was something cool and seafaring. Wrong on that. Sorry, Swampscott. Yours is the second-dumbest name.

Magicians aren’t tough or gritty. They’re not even kind. They’re, well, magicians. They do fake things and then cackle. This doesn’t seem to be the best message for the next generation or for fair play.

Now, I understand the position of weakness from which I start. I’m the outsider going into someone’s longtime family home and saying, “You know where that couch would look better? The curb.” But since I have no aspirations of ever being on the School Committee, I’ll say what needs to be said: It’s time for a name change.

I’ve done informal polling, and while some people have fuller lives and have never given the name much thought, others quickly spit out things such as, “I’ve always hated it” and “It makes no sense.” My 10- and seven-year-old sons, both future Magicians, just say independently, “Weird” and “Freaky.” And these kids don’t mind anime. They touch on the most commonly used descriptor: creepy. And if one person calls your mascot creepy, that’s probably one too many people calling your mascot creepy.

There’s no surprise there, given that magicians are creepy by default. (Go ahead, magician readers. Try to fake saw me in half.) Which brings me to my next point: The logo does the name no favors. Pointy chin with top hat, empty eye sockets, thin handlebar mustache. None of it screams, “Game time.” But maybe that’s the point: to scare our opponents or make them constantly look over their shoulders because…there’s…a…magician…sneaking…up…behind…no, it’s too laaaaaaate.

It’s easy to bang on the logo, but all the problems start with the name, because there’s no good way to depict a magician. Scarf? Wand? Ten of clubs? Nope. Nope. And nope.

I’ll admit that a lot of my initial thoughts were those of a clueless newcomer, because I didn’t know the reason for the name, so I found out: In 1934, Marblehead was known as the Yachtsmen, which makes more sense but doesn’t make any better impression. The football team was playing a game in Miami against Edison High School in which Marblehead was supposed to lose big but ended up winning big. The write-up said they used so much trickery and deception, they played like magicians.

And the Yachtsmen were no more. Evan Harris, who grew up in town and is now president of the Marblehead Gridiron Club, loves the story and loves the name. “I’m a Magician. I played as a Magician,” he says. “It’s served us well.”

All right, now I get the context. It makes total sense, and it still needs to be changed. (Marblehead has had two team names. The other is the Headers, something that’s simultaneously uncreative and problematic enough that no female athlete or cheerleader will ever wear a sweatshirt with the name printed on it.)

The problem is that the name only means something to the football team. Why should the rest of us be saddled with this for all of eternity? What if the girls’ tennis team had a huge victory back in 1953, got complimented for running down every ball, and decided, “Hey, we are the Golden Retrievers”? Would the linebackers be okay with that?

So with that which-is-worse choice, the Magicians have taken over every team, save one—stay strong boys’ hockey—like crabgrass. But it still doesn’t make it right. A backstory is fine, but a lot of people who grew up here have no idea of the origins; newcomers certainly don’t. And even when it’s explained, it still gets a “Huh?” The thing with any name is that it has to stand on its own. More than that, it should relate to the place, and this has absolutely nothing to do with Marblehead. We didn’t create magic. We don’t even have a magic shop. The closest we got is a shit-ton of bunnies.

Do I still think the Magicians should be jettisoned? Absolutely. Do I think it will? Not a chance. It’s not offensive enough for the School Committee to say, “Forget the new roof. Who wants to be on the Name Subcommittee?” It’s also not a shock that an old town like Marblehead loves its history to the point of not wanting to let go of it. As Jenn Schaeffner, a former School Committee member and Marblehead native, puts it, the prospect of change usually brings about the reaction of, “Oh, the tradition.” But everyone can have a tendency to get selective with nostalgia. You know what was also part of 1934? Cars without seatbelts and candlestick telephones.

Every once in a while, it’s not bad to take a step back and freshen up things. People who live by the ocean do this every eight years with house paint, and no one complains, “You can’t strip that coat! It might still have some original lead.” To that point, we have already set a recent precedent for cleaning up dated language. At Town Meeting in May, we voted to change the Board of Selectmen to the Select Board and remove gender-specific pronouns from the bylaws. It passed comfortably, although not without a small opposition who might as well have started their speeches with, Back in the day…

My argument for making the Magicians go away isn’t helped by the fact that the football team won the Division 3 Super Bowl last year. When that happened, more than happiness or civic pride, I felt depressed that we’re gonna be stuck with this name in perpetuity.

Or are we? There is, dare I say, history for winning a huge game and deciding that it’s time for something new, and while Florida was big, what’s bigger than the Super Bowl? I mean, it’s called super. Shouldn’t that be commemorated? Aren’t the kids of today important? I say yes and I say they deserve, like their predecessors, to mark the occasion. Maybe the victory was a sign that the Magicians have done their job. It’s almost like a whisper in the night air saying, “It’s time, time to say goodbye.”

For some inspiration, let’s keep with tradition and look to the post-game write-ups for the words that were used. One player was called an ace. Ooh, the Marblehead Aces. Sweet. One kid wriggled out of trouble. No one else is the Wrigglers. Another kid was called a monster. Who wouldn’t cower at the thought of first having to ride a bus and try to find Marblehead and then, once off the bus, facing THE MONSTERS? Jim Rudloff, Marblehead’s head football coach, might have offered some inspiration when he said, “We wanted to be aggressive, physical, nasty.” The Marblehead Nasties. Sound good?

Okay, not that one. But the time is right and while not being creepy is a decent motivation, there’s a bigger reason. “We can be better than this,” Schaeffner says. Adds Sarah Fox, a School Committee member who was up for re-election at the time of our interview and still talked on record, “We have a ton of history to draw on that could be much more meaningful.”

This isn’t just about changing our name. We would be setting a standard—more than we already do—for other towns to start picking better names.

There’s also a ton of upside, my fellow Marbleheaders. This isn’t just about changing our name. We would be setting a standard—more than we already do—for other towns to start picking better names, because for every Ashland Clockers, Peabody Tanners, and Gloucester Fishermen, there’s tons of boring. Newton, my hometown, has two high schools, the Lions and Tigers, neither of which is native to any of the 13 villages. But the marathon runs through the city. I’ll let North and South fight it out over who should be the Heartbreakers, because someone needs to be the Heartbreakers. Waltham, where I lived for years, doesn’t miss a chance to remind everyone it’s Watch City. But are they the Crowns, the Timekeepers? Nope. The Hawks. Oy.

So Marblehead, it’s on us, and rather than merely complain and make excellent points, I’ve come up with ideas, because if we’re going to change, the new name has to be better. And frankly, anything is better. Like the Marblehead Anythings would be a step up, but the Anchors, Cutters, or Booms would do just as well.

But there’s one that’s much, much, so much better.

Before my neighbors start a Facebook group and tread on my crappy lawn, I ask that you take a second to consider. It keeps the M. It’s easy to say and would finally and willingly be said out loud, since some people refuse to speak the current name. It would have a cool logo and sell tons of merchandise that young kids could now wear without fear of having bad dreams. And most important, no mariner has ever been laughed at, mocked, disrespected, underestimated, minimized, or, been called creepy.