Accordion truck roof, backed up traffic, the judgment of locals—it's all here. 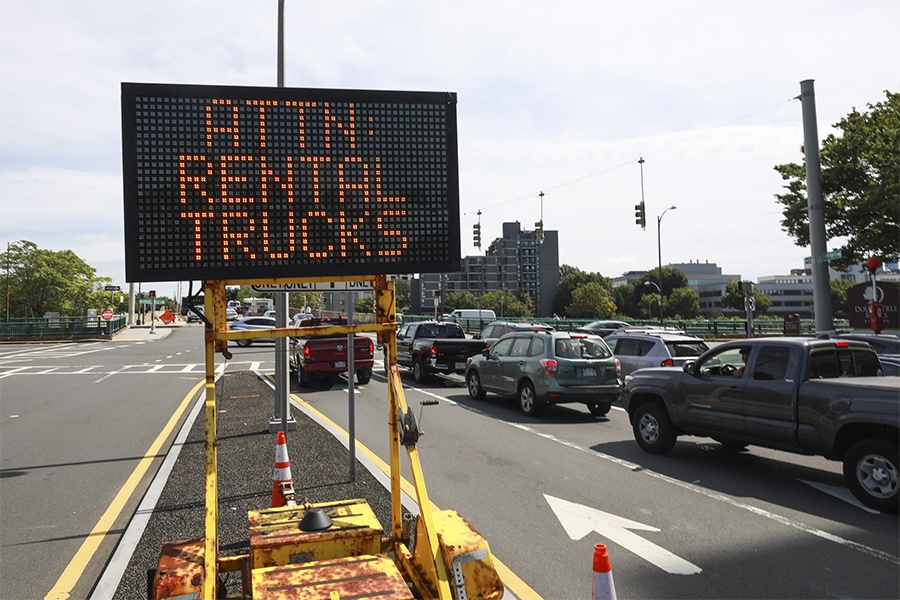 Jokes abound about the seasons we experience here in Boston, from winter to It’s Still Winter to Three Weeks of Unbearably Hot Summer Weather, but while all of New England experiences these temperatures, it’s Boston alone that lives through the struggles of Storrowing Season.

Yes, it’s time once again to gape at pictures and videos of Uhauls that people have driven past any number of warning signs along Storrow Drive, Memorial Drive, and Soldiers Field Road. The prototypical Storrowing involves the roof of a moving truck sheered straight off as traffic grinds to a halt for miles behind it. In luckier versions, the moving boxes stay in the trucks, but occasionally, a Storrowing will see some poor college student’s dorm furniture strewn around the road. And today featured a pretty exemplary version of the event, on Soldiers Field Road.

As usual, everyone in Boston has an opinion on how to prevent this from happening, but since no amount of signage has fixed the problem thus far, it’s starting to feel like nothing short of closing the road entirely will stop a determined driver from missing or ignoring that the bridges are too low. So here’s how 2022’s Storrowing Season is shaping up so far, with our sincere wishes that everyone involved is OK and gets out of this with their possessions intact.

🚚💥 #Storrowing on Soldiers Field Road eastbound in #Boston tore the roof off this moving truck. @MassDOT said the bridge was inspected and no damage was found. pic.twitter.com/TCDawmKyel

Now is the time to be grateful for local news media access to helicopters that can take such pristine footage from above. Here you see the usual accordion roof, but a very lucky driver—the boxes are still inside the truck, and appear to be in good shape.

We would be remiss not to share this additional footage of the truck being towed away, a solitary box flap waving forlornly in the breeze.

Here you have another example of the form, where the roof hasn’t been ripped off…but now they’re stuck.

Soldiers Field Road EB in #Boston is currently closed for bridge inspection and clean up due to an over height vehicle strike.

Bless MassDOT’s refusal to call this a Storrowing. Sure, an “over height vehicle strike.”

Someone really out here using a hearse to move into Brighton…

Honorable mention to this creative workaround to the issue. Someone tell Uhaul that they can save a few trucks each year by renting these out instead.

The near-miss is another important tradition: belongings protected, but other drivers are stuck, plus someone has to help the driver out of there.

every september as college kids move to boston someone invariably gets their u-haul stuck under the low clearance bridges on storrow drive. may i present the extremely rare and sought after ‘double storrow’ pic.twitter.com/Fc0cIwporY

Is this the first known footage of a near-double Storrowing?

Its Sept. 1st, the busiest moving day in #Boston! If driving a truck or U-Haul, remember that Waze & Google Maps won’t know. Make sure your route doesn’t include:

These have height restrictions as low as 9 ft. Don’t get #Storrowed. pic.twitter.com/Kn5gbUOn6F

Well, they tried. Someone get Google on the phone and tell them to make this change.