Watch the action unfold this weekend on both sides of the river. 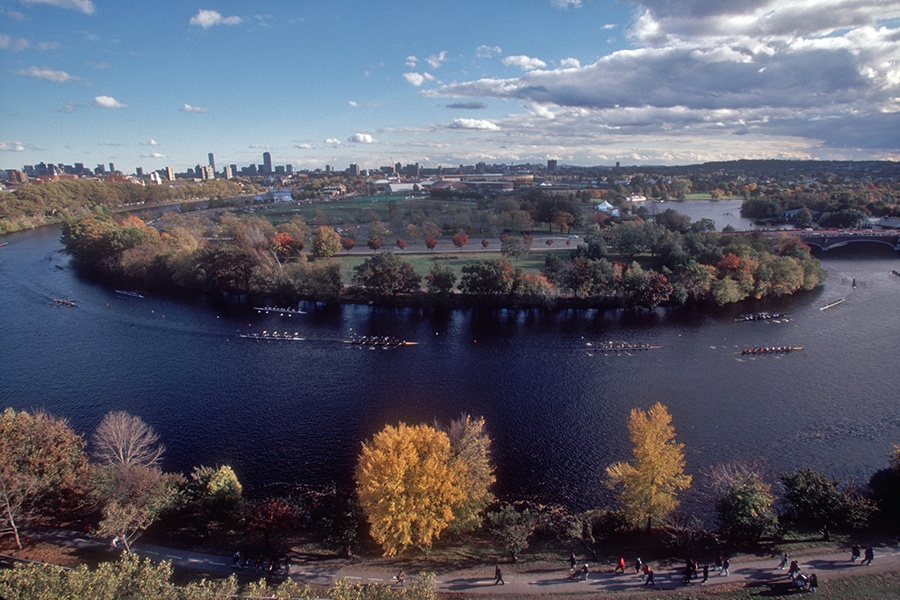 Head of the Charles Regatta. / Photo by Joel Rogers/Getty Images

In 1965, a Harvard sculling instructor named Ernest Arlett took a look at the Charles River and hatched the idea of a 3-mile race along the mighty waterway. Inspired by England’s historic rowing races, Arlett’s envisioned matchup would bring the region’s heartiest scullers together to compete for the distinction of “Head of the Charles.” Since that inaugural race, the Head of the Charles Regatta has ballooned into a Godzilla-size weekend of international sportsmanship. Over 11,000 athletes are slated to lock oars for the 2023 race events, making this the largest gathering in the history of the regatta (which is already the largest three-day regatta in the world.)

“A coach in California once called this “the Superbowl of Rowing,” says Fred Schoch, executive director of Head of the Charles, adding, “I think what makes it special is the confluence of the challenging course and all the colleges in Boston. Students were our first audience and more and more, people started to realize what’s going on up and down the banks of the Charles.”

As the first full-time employee of the race, Schoch has played a pivotal role in the transformation of Head of the Charles into a multi-day showdown with global dimensions. He attended Olympic games and world championship events to persuade top-tier rowers to make the pilgrimage to Boston and compete on the Charles River. And this year, Head of the Charles organizers and spectators will be welcoming some very special guests—Ukraine’s rowing team.

The national team—based in Kyiv—has managed to slice through the waters of several host countries since the Russian invasion of Ukraine began. On the heels of competing in Turkey, Bulgaria, and Croatia, the Ukrainian scullers will make their debut in Boston this weekend. The crew includes Olympians Nataliya Dovgodko and Anastasiia Kozhenkova, who won gold medals for the women’s quadruple sculling races during the 2012 Games. “My race director spoke to a Ukrainian coach at Riverside Boat Club and asked if the team would be interested in coming, and the resounding answer was yes,” Schoch says. “We got support from Delta Airlines, who flew them over, and the city of Cambridge helped by taking care of their hotel reservations.”

With so many elite rowers torpedoing across the water in their boats for three days straight, deciding when and where to watch the races might seem daunting. Thankfully, the Head of the Charles course features several easy-to-reach landmarks that offer terrific vistas of the river. Each race starts from Boston University’s DeWolfe Boathouse, which is located on the Dr. Paul Dudley White Bike Path (on the Cambridge side of the river). Heading inland, the boats pass beneath several river crossings including the BU Bridge, the River Street Bridge, the Western Avenue Bridge, and Harvard’s John W. Weeks Footbridge. The Weeks footbridge can be an especially thrilling place to watch the race, as boats are forced to attempt a brutal 90-degree turn in the river before huffing onward past Anderson Bridge and Eliot Bridge to the finish line at Christian Herter Park, where thousands of fans will be clustered along the riverbank and docks.

Of course, it wouldn’t be a major sporting event without plenty of grub and libations, and this year’s Head of the Charles offers a hefty menu of choices. Heading inland, your first stop for sustenance will be the Weld Exhibition at Riverbend Park (a seven-minute walk from the Harvard Square MBTA station.) This will be the most bustling food and beverage hub along the course, and if you’ve got a backpack or deep pockets, you can stock up on plenty of edible samples from vendors. Nearby, the Reunion Village is where spectators can bump shoulders with Head of the Charles alumni and athletes’ families while tucking into comfort food from Boston Burger Co., with a Sierra Nevada chaser. (Admission for the village is $10 per person.)

If you’re feeling extra saucy amid the cheers and communal jubilation, you can also spring for a $5 to 10 advance ticket to the regatta’s newest watering hole: the FALS Bar. Located next to the Attager Row awards tent, where the prizes are dished out, FALS stands for “Finish Area Launch Site.” So if you find yourself raising a glass in the beer, wine, and cocktail garden here, you might be toasting a new regatta champion as they’re crowned. And while you’re at Attager Row, consider visiting the Head of the Charles Expo, where you can commemorate the day with chic regatta swag and—if you’re a budding or aspiring sculler yourself—some bona fide rowing gear.

Both Saturday and Sunday’s sculling races will kick off at 7:45 a.m., with the final boats departing at 3:22 p.m. and 3:38 p.m. on those respective days. While you’ll want to take a good gander at the official regatta schedule to determine who will be racing when, Saturday’s events feature mostly veteran athletes, while Sunday is more tilted in the direction of college and high school rowers. But wherever and whenever you find yourself joining the throngs, you’ll be joining a community that has made Head of the Charles one of Boston’s most exuberant traditions for more than half a century.