An Open Letter to LeBron James

You've said that fans in Boston are racist. I'm here to tell you it's more complicated than that. 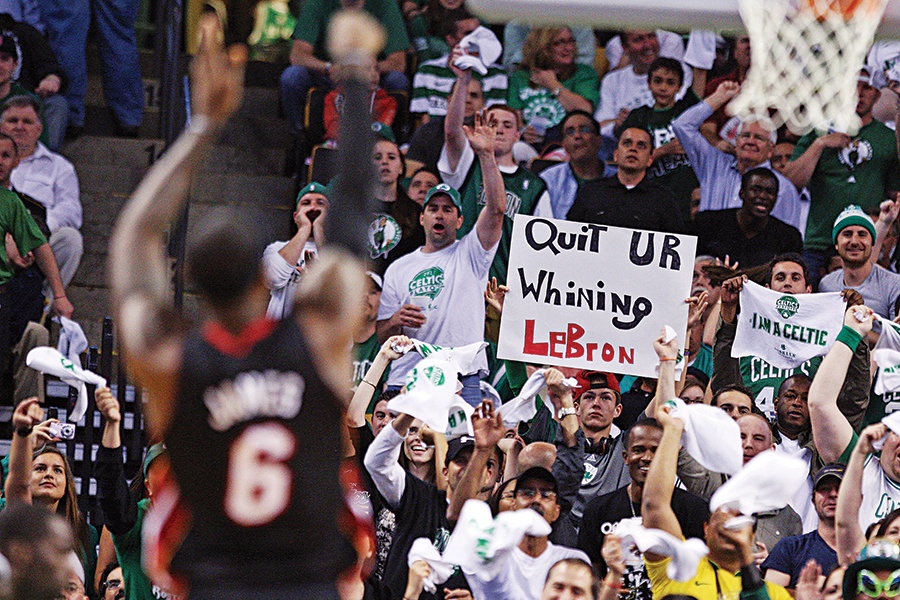 Celtics fans send LeBron (then with the Miami Heat) a message at Game 3 of the 2012 NBA Eastern Conference Finals at TD Garden. / Photo via Boston Globe/Getty Images

The words came right out of your mouth, and I knew they’d echo across Boston.

It was back in July when you were responding to a question posed by your business partner and friend Maverick Carter on your show The Shop: Uninterrupted: Where was your least favorite place to play ball?

You instantly responded, “Boston”—then you elaborated by saying, “Because they’re racist as fuck!”

Watching the show, I let out a sigh and muttered, “Not this again.” After all, this is our city’s never-ending story—the conversation we keep having, over and over again, like a glitch in the matrix: Is Boston racist? And the moment you said it, I knew we were in for another round. This is going to explode everywhere, I thought.

Sure enough, a week later, the conversation was so widespread that even Boston Mayor Michelle Wu weighed in on the situation. “I don’t want to downplay the experience, particularly of players who have lifted up this concern,” she said, “especially those who have been in the game for a long time and have had exposure in Boston in years past. Boston has had that reputation nationally, and it is something that we have to confront and address.”

Wu concluded by offering to take you on a tour of Boston.

Your encounters are valid, LeBron; they’re what you experienced, and I’m afraid that having you tour our city would do little to sway your feelings toward Boston or the fans that have crossed the line while taunting you. I remember the time, after Game 6 of the 2012 Eastern Conference Finals at TD Garden, you were playing for the Miami Heat, and someone poured a drink on you while you were leaving the court. Around that same time, former Heat teammate Eddy Curry has said, a Boston fan walked up to you and said, “Hey, LeBron! You fucking suck!” While these comments may or may not have been racially motivated, they hurt. And, more important, there are certainly other examples I know you are aware of when Boston fans made unambiguously racist comments to other players, such as the time in 2019 when the Celtics banned a fan from home games for two years for hurling a racial slur at Golden State Warriors center DeMarcus Cousins. Or the time in 2020 when the Celtics’ own Marcus Smart spoke out about being called the n-word by a Boston fan.

Are there individual racist fans in Boston? Of course there are—just like there are in every other American city today. Like Celtics All-Star forward Jaylen Brown has said, “Racism is bigger than basketball.”

To understand what you’ve been through here and to understand where your comments are coming from, we need to start by looking at your unique relationship with the fans of Boston—and who the Celtics fans really are. When you play a game at TD Garden, you must know that the Bostonians you see in the stands aren’t exactly a random cross-section of local fans. Instead, you’re mostly encountering the subset of fans who can afford to regularly attend games in-person and sit courtside. These people tend to be wealthier, and they tend to be white. This is, yes, a visible sign of Boston’s unfortunate history of redlining, segregation, and inequality, all of which created a racial wealth gap city residents and leaders are still working to close.

Still, the sight of mostly white fans sitting courtside helps bolster the stereotype that Boston as a city is mostly white—a stereotype, as I’ve written before, that erases other parts of Boston: a diverse place full of Black and brown people who are just as devoted to their local sports teams as any other Masshole. These fans respect you as a player, and they certainly don’t hold your race against you. But they’ll still boo you coming out of the tunnel, will want to see superstar Jayson Tatum cross you over and stick a jumper in your face, or see Jaylen dunk on you.

The truth is that Boston—all of Boston—prides itself on being extremely hostile to visiting teams because it’s a sports town with a knowledgeable, insanely loyal fanbase. We prove that we’re a real sports town based on how uncomfortable we can make the opposing team and its players feel. We pride ourselves on being hated nationwide by other fanbases due to how committed we are to providing the most unwelcoming environment possible for rival teams and players. And you, LeBron, are the rival player Bostonians—regardless of racial background, nationality, or ethnicity—love to hate the most. 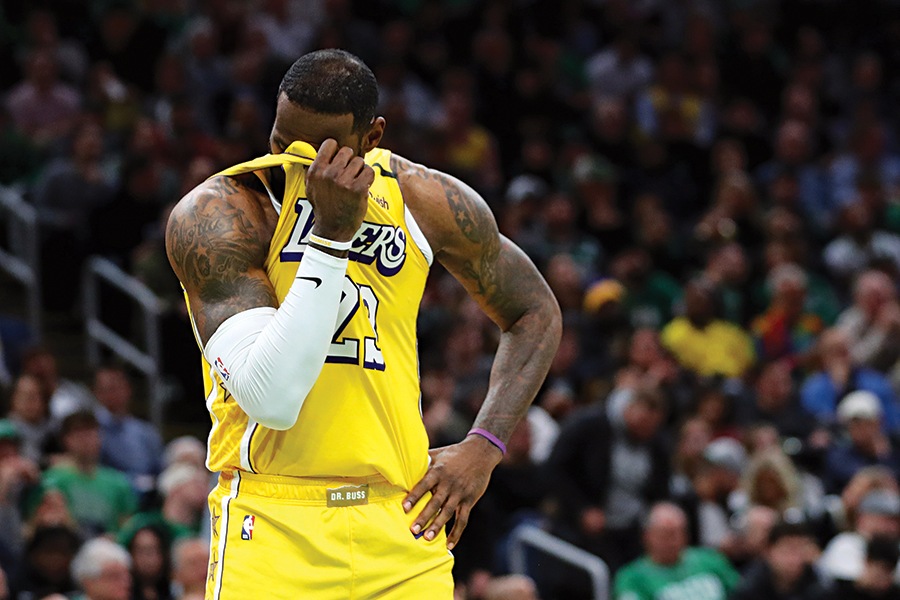 Suffering as a Laker through a January 2020 defeat in Boston. / Photo by Maddie Meyer/Getty Images

I remember watching you play here in July 2003, when you were just 18. You had been the first pick in the 2003 NBA Draft, instantly expected to be the franchise player who’d turn around the fortunes of the much-maligned Cleveland Cavaliers. Among your first games as a pro were in Boston at the Reebok Pro Summer League, held at UMass Boston’s Clark Athletic Center. I can still hear the crowd mercilessly heckling you, chanting that you were overrated.

The season after reaching your first NBA Finals, you faced the Celtics in the 2008 playoffs for the first time in an emotionally charged, hard-fought seven-game series that the Celtics won on their way to the NBA Championship that year. From that series on, you officially started to become a villain in the eyes of the Boston Celtics fandom, only further solidifying that status after facing the Boston Celtics again in the 2010 NBA Playoffs. The veteran underdog Celtics beat your favored Cavs in six games en route to the NBA Finals, where they heartbreakingly lost to Kobe Bryant’s Los Angeles Lakers during the final minutes of the decisive Game 7.

The Boston Celtics became the career mountain you needed to climb in order to ascend to greatness in your basketball career. At the same time, to be a Celtics fan was to hate you, LeBron, and to love you as a fan meant to hate Boston just as you did.

After the 2010 NBA season, you held a televised special dubbed The Decision to announce what team you were going to play for next. You took your talents from Cleveland to Miami to team up with All-Stars Dwyane Wade and Chris Bosh in hopes of finally getting past the Boston Celtics. It worked—the Miami Heat eliminated the Boston Celtics in five games during the 2011 Eastern Conference semifinals. Then your squad beat the Celtics again in seven games during the 2012 Eastern Conference Finals on your way to your first NBA championship ring. By then, people outside of TD Garden were selling T-shirts that read “LeBron Is A Bitch.”

You returned in 2014 to Cleveland, where you and your Cavaliers eliminated the Celtics in a first-round sweep during the 2015 NBA Playoffs. Next, you beat the Celtics in five games during the 2017 Eastern Conference Finals, and the following year you dispatched the young upstart Celtics in the 2018 Eastern Conference Finals by winning a close Game 7 in TD Garden. Most people are lucky to exorcise their demons, but you became your demons’ personal tormentor. There aren’t many people walking the earth who can make that claim. The Celtics rivalry is part of what made you great. 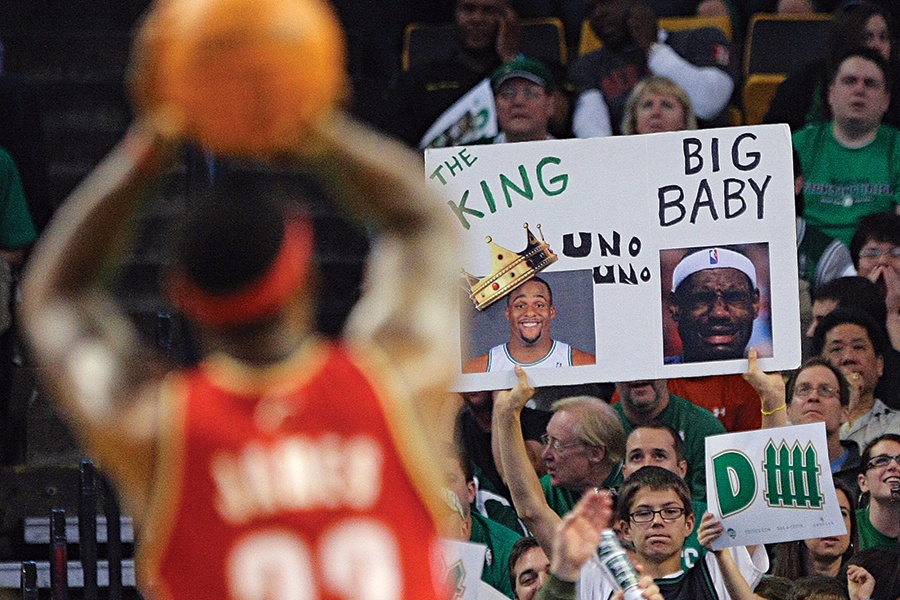 As a Cleveland Cavalier, LeBron was taunted during the 2010 Eastern Conference Semifinals at TD Garden. / Photo by MedianeWS Group/Boston Herald via Getty Images

Over the past decade, you’ve replaced the late Kobe Bryant as the Boston Celtics fandom’s main adversary. And to put it mildly, joining the despised Los Angeles Lakers in 2018 did nothing but intensify that animosity. This is despite the fact you have business ties to Boston as part of the Boston Red Sox ownership group alongside chairman Thomas Werner. In addition, along with brand manager Maverick Carter, you and Werner served as producers of the Starz television series Survivor’s Remorse, about a Black Bostonian basketball player who moves his family to Atlanta. The show aired from 2014 to 2017, and it is still the lone cable series about a Black Bostonian family.

Further, it’s been speculated that the show’s main character, Cam Calloway, is loosely based on Roxbury’s Shabazz Napier—who you were a fan of when he won a national championship at UConn in 2014. You were such a big supporter, in fact, that at your behest, your then–Miami Heat traded up to draft him, only for you to sign with the Cleveland Cavaliers weeks later and strand Napier on a team that only acquired him in hopes of retaining you. Working on a team that didn’t appreciate him kind of screwed up the first 5 years of Napier’s NBA career. In Boston, it was seen as yet another violation, LeBron.

So let’s go back to your assertion about Boston Celtics fans based on your experiences visiting Boston and playing in TD Garden as the opponent. As a Black Bostonian and a lifelong supporter of the Celtics, I can’t doubt that you’ve been subject to abuse from Celtics fans over a career that’s spanned almost two decades. It’s because you’re so good.

Regardless of how much vitriol and venom has been spewed your way during your career as the Celtics’ nemesis, one thing Boston sports fans will always be able to do is recognize greatness. You’re a generational talent, the kind of player we probably won’t see again for a long time. Celtics fans likely won’t properly respect and acknowledge your accomplishments, the way your fans already do, until you’re on your farewell tour and about to hang up your Nikes for good—the way they’ve embraced the Lakers’ Magic Johnson and Kobe Bryant after decades of enmity.

Once you’re no longer the guy on the court preventing the home team from winning more banners, you’ll finally get to see another side of Boston sports fandom: The one where they appreciate the role you played in some of the greatest and most memorable games of their lifetime—even if they were on the losing side. While you may hate fans in Boston, LeBron, if any of your sons currently headed for the NBA get drafted by the Celtics, you’ll get the chance to know what it’s like to be beloved by Boston fans, too.