Turns out, there are still road signs that restrict equine excursions on Massachusetts' highways. The question is: How did they get there in the first place? 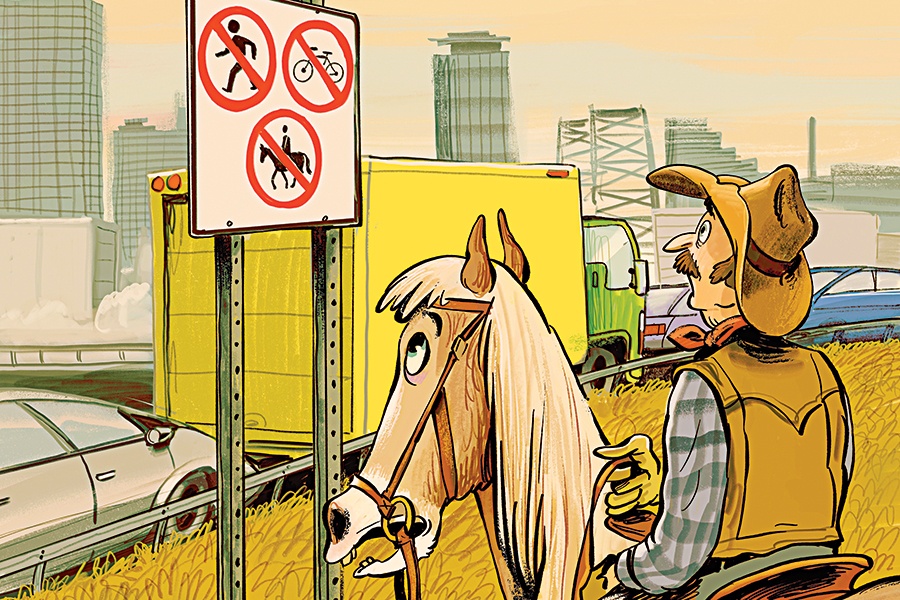 We’ve all had small moments when life finally felt like it was returning to normal. For me, it was the bulk section reopening at Whole Foods. “We can grab out of the same granola bin? We’re back, baby.”

The other one was when I could leave my house and go places, which meant driving, and that meant going on the turnpike and expressway—and I love being able to go on the turnpike and expressway for no other reason than to see my favorite sign in the entire world. It’s on every on-ramp, and it’s poetry without words, just three symbols with lines through them. No walking. No biking. And one more.

The first one, okay, makes sense. I-90 isn’t ideal for a stroll. The second, sure, I suppose you gotta tell people that the Ted Williams isn’t the place for a Peloton.

But eff me on the third.

Tell me, Massachusetts highway officials, where am I supposed to go when I need to take Chestnut out for a ride? That mare needs to run, and that requires cement under her hooves and Ford F-150 exhaust in her face. Without that, she’s a whole lot of ornery for the rest of the weekend.

Here’s the thing. This is an official marking. It’s in a manual on the Department of Transportation’s website. The sign has its own page (19) with specifics on measurements, borders, and colors. But before any of this could get to the design phase, the content had to be agreed upon. That meant a meeting among adults. Sorry, many meetings. Months and months of meetings, subcommittee reports, and task forces. And before that final vote, there were more discussions as they finally got to Agenda Item No.12.

“People, we can only have three. I know the sign could fit four, but that’s too much to read while drivers are going 80 and trying to merge. I think we can agree on no walking and no biking. But the last one needs to bring it home, and bring it home hard. Who’s got something?”

Ideas got chucked out. The towed powerboat proposal received some debate. The thought of banning goats had minor traction. But in the end, they were a “no,” just like tractors, wheelbarrows, and shopping carts. Then someone suggested, almost apologetically, in the middle of the night, “A horse?”

Cheers and high-fives all around. The work was done. The roads could be opened because they had their rules.

At least, that’s how I’d like to picture it. In truth, state law says you can’t drive a horse or a horse-drawn vehicle onto a highway where a sign has been posted. So there has to be a sign because, as Terry Regan—a Boston University adjunct professor in the city planning and urban studies program—explains, “If there’s no sign, it’s not prohibited.” Translation: No sign guarantees horses on 128.

I get the original intent of the regulation. The first charters for turnpikes in Massachusetts were in 1799, and I’m guessing there were few bans on horses back then since, well, it was 1799. I’m also guessing that clashes between auto and steed started happening around 1908, when the Model T came out and some horse got totally freaked out by the sight of the steel beast. Which probably explains the state law that says a motorist always has to stop or give the right of way to a horse, cow, or draft animal if it seems freaked out. (The law says frightened. I took a liberty. It’ll be my only one.)

And I’m sure by the time the Sumner Tunnel opened in 1934, and Ford, General Motors, and Chrysler were all pumping out cars, someone on the road commission realized, “We’re gonna need some kind of sign, or it’s gonna get ugly.”

Fine. Job well done sign, but when Route 6 opened in the ’50s, no one was saying, “Leaving for the Cape now. Where’s my saddle?” But the sign remains.

If it were removed, I don’t think we’d necessarily end up with livestock jamming up the Zakim. Sure, maybe one kid from Dover or Hamilton will accept his friends’ dare—I was going to use a neutral pronoun, but you know it’s a he—and take a joy ride, but one good ticket and seven points on his insurance will send the right message.

But here’s why it won’t happen. In general, we great citizens of the commonwealth love nothing more than getting indignant at being told what to do. “Cross at the crosswalk? Don’t think so.” “Resident parking? I’m a resident of the world, meter reader. Bite me.” And we would, without question, bring a horse onto any roadway just because we couldn’t, if only we wanted to, but we don’t. If someone yelled, “They’re trying to tell me where I can bring Mr. Sugar. I’ll tell you where I can take him. Any goddamned place I goddamned want, and tomorrow it’s sandcastles and Revere Beach,” the whole bar would yell back, “On Route 1? What kind of jackass are you? Now get back to trivia night. You’re the literature guy.”

I get that the state is full of old laws that go unnoticed, but here’s the thing with the No Horses regulation: The sign was updated in 2016, according to the DOT site. It might have been the graphics or spacing, but it wasn’t the symbols. It’s still no bike, no walk, no horse.

Really? There were zero thoughts on freshening things up a bit?

I’m just spitballing here. Maybe a cell phone with a line through it? I know it gives directions and plays music, and I don’t want anyone to be lost or be lost in silence, but we could agree the picture just means to keep your eyes up and on the road. That’s still a good driving tip, or was that just a thing for all of history except the past 20 years? Or maybe the head of an angry man yelling angry words, expressed with typographical symbols—#s, @s, and %s—technically known as grawlixes (didn’t know that either), with a line through it? I respect anyone’s freedom of expression, but the extra cortisol being produced from the rage does no one any good on the road.

Wait. I’ve got it. A middle fi nger with a line through it. I realize it’s akin to banning “Sweet Caroline,” but it might actually create a more peaceful, less stressful experience. I said, “might.”

I guess none of these fl ew, if they were talked about at all. Okay, Department of Transportation, horses remain the true menace. Hooray status quo. But here’s the other thing I realized: The sign is specific with what’s not allowed, so…I guess it’s a green light for bringing on everything else, like, let’s see, your bear, elephant, tank, skateboard, electric scooter, parasail, wagon, tricycle (yes, but this has three wheels, officer), ostrich, camel, and pedicab.

I actually don’t want any of those things on the expressway. That would be silly. I want something else. The horses. Bring them back. For one, it couldn’t be any worse, and with all of the T’s problems, we need as many conveyance options as possible.

Plus, they come with a ton of upside. Gas prices are still too high, and horses are the most fuel-efficient things out there. People will stay off their phones because unless you’re a champion roper, you’re going to need both hands to keep that stallion between the lane lines. Rotaries will be a daily thrill ride as you whip around and around, finally getting to use that crop that’s been gathering dust in the garage. Dreaded no more, those traffic circles will become beautiful urban carousels.

Oh, one more. We’d get into shape without having to go to the gym. Staying on a horse requires core strength. Sure, there’ll be soreness, but have you ever seen an equestrian’s abs? Wicked sick.

I know this is a lot, and we should probably test it out a few Sundays on Memorial Drive. You know, trot before we can canter and then gallop? I bet the rollerbladers won’t mind.