The Secret Life of Cranberries

Here’s an inside look at how cranberries go from bog to bag—way before your Thanksgiving turkey goes into the oven. 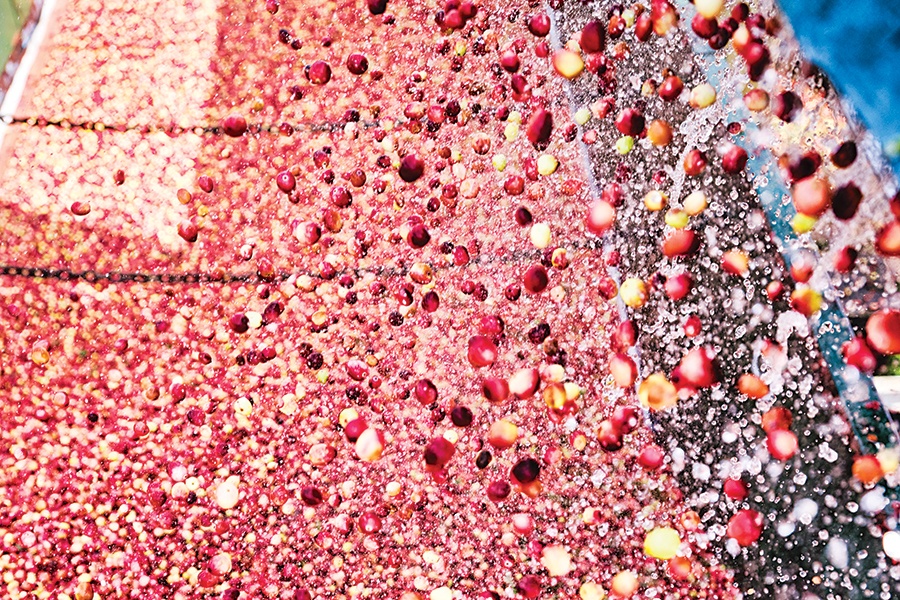 From the sky, it looks like a sea of ruby red down below—a shock of vibrant life in a canopy that’s otherwise fading to brown in preparation for a long winter’s rest. And then, seemingly out of nowhere, the crimson sea slowly begins to part as the tiny dots that make up the landscape are corralled and pushed closer together, gearing up for the yearly wonder of the cranberry harvest.

Turkey may be the food most synonymous with Thanksgiving, but cranberry sauce clocks in at a close second. And no place harvests cranberries quite like Massachusetts. With more than 14,000 acres of bogs ripe for the picking, the state is among the top producers of the ruby-red fruit. Nearly 15 percent of that impressive acreage is owned by Wareham’s A.D. Makepeace Company, a main supplier to Lakeville-Middleborough-based Ocean Spray and a giant in its own right: Beyond its reign as one of the world’s largest cranberry farms (and the marketplace and tours that go along with it), the 160-year-old business is also the largest private property owner in eastern Massachusetts and continues to develop its land with preservation (and a growing collection of bog-adjacent housing) in mind.

But back to those cranberries for a moment. How, exactly, do these fruits get into that little plastic bag at the grocery store before making their way to your Thanksgiving table? On a glorious early-fall day at the beginning of the harvest season (which concludes this month), we joined the A.D. Makepeace team for a jam-packed day down in the bog. 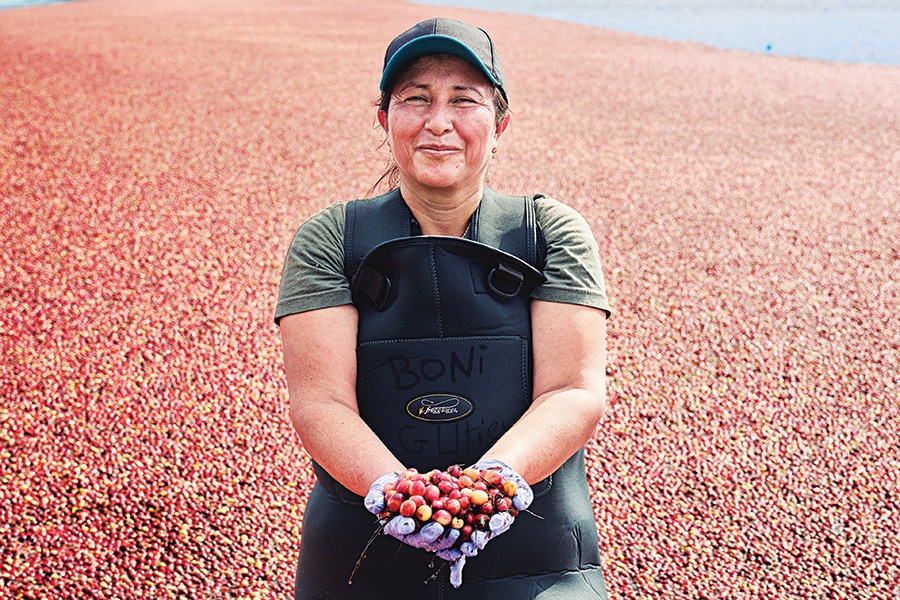 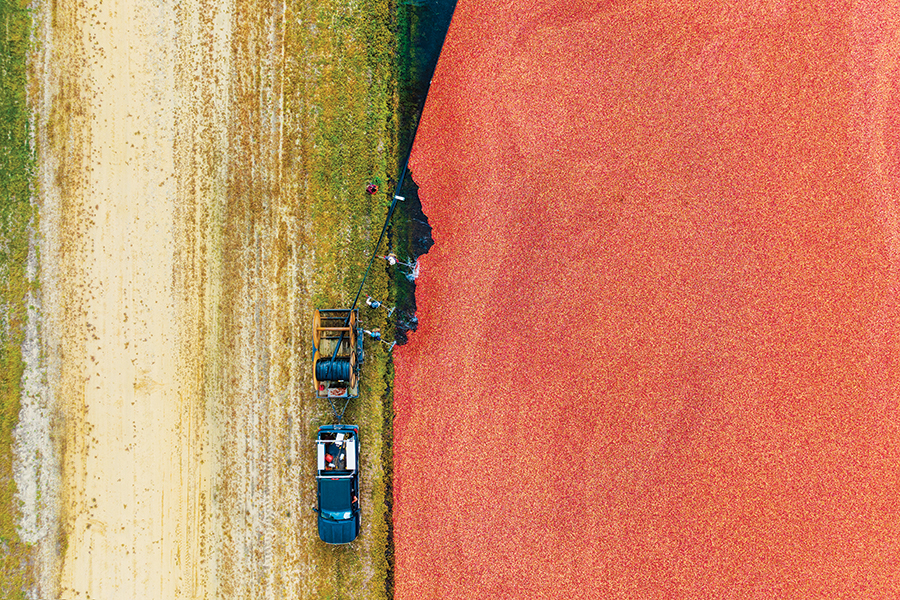 Workers corral berries at A.D. Makepeace’s Carverside Bog in Plymouth using an 8-inch-high piece of plastic called a boom, which is pulled by a truck. Virtually all of the equipment used by the company is created or modified by the in-house machine shop. 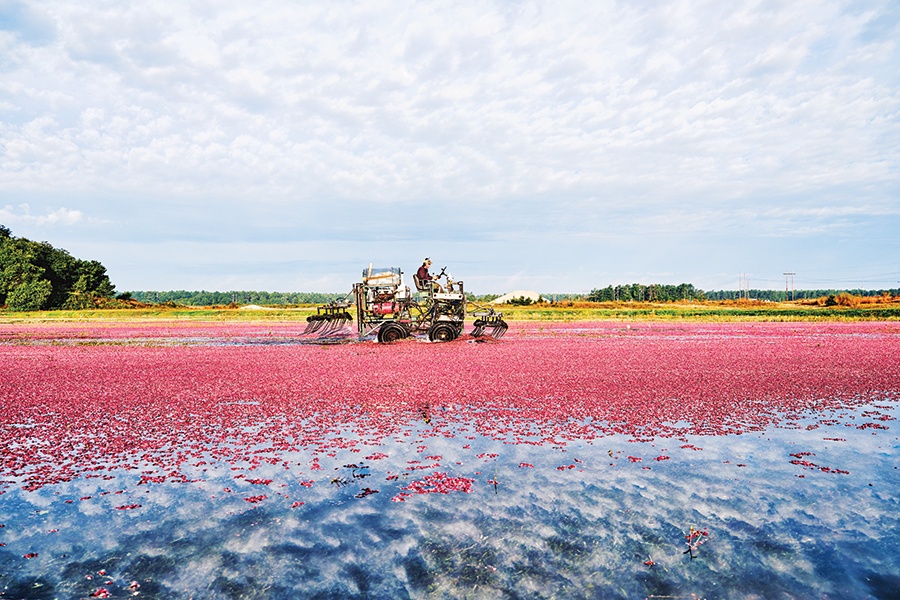 At Smalley Bog in Wareham, workers begin the cranberry-harvest process by flooding the bog with about 6 inches of water. Then the picking machine goes around in laps, knocking berries off the vines so they float to the surface. 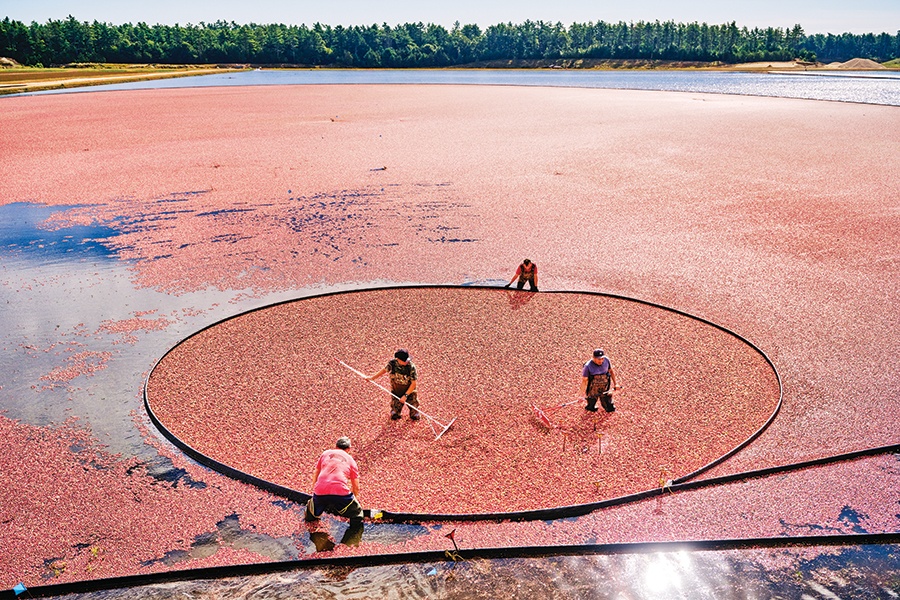 After the cranberries are corralled into one area in the Carverside Bog, it’s time for loading. Using flat rakes, employees push the berries into a pipe; from there, they head into the wash bay, where they’re sorted and cleaned. 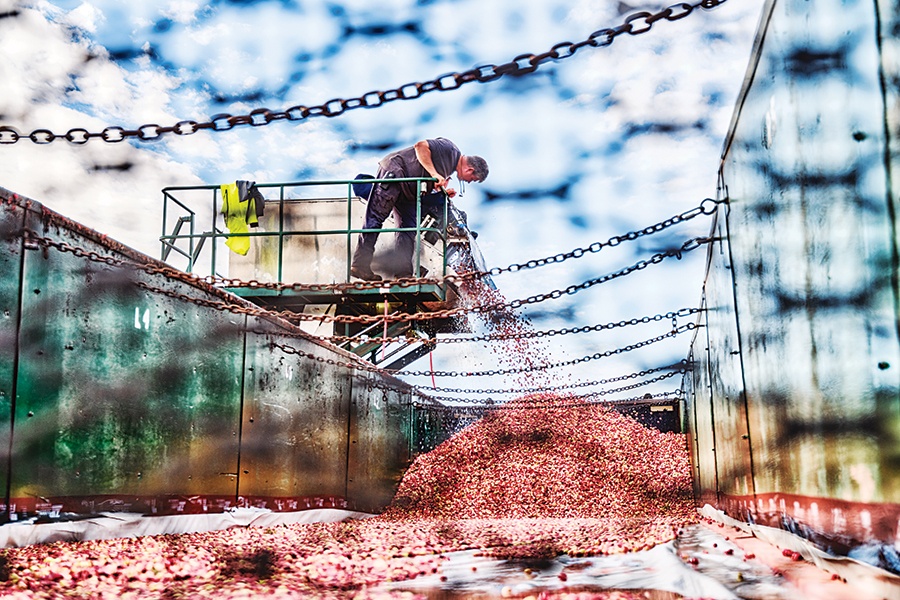 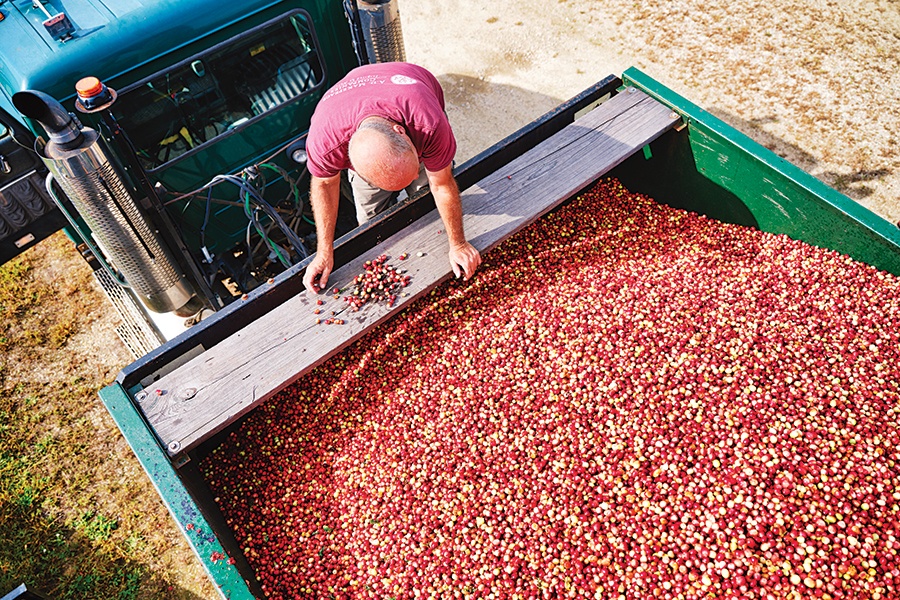 The pristine berries make their way from the conveyor belt to the trailer that will soon take them to the Ocean Spray processing facility. The “trash” (i.e., the leaves, weeds, and water) gets tossed into a dump truck. 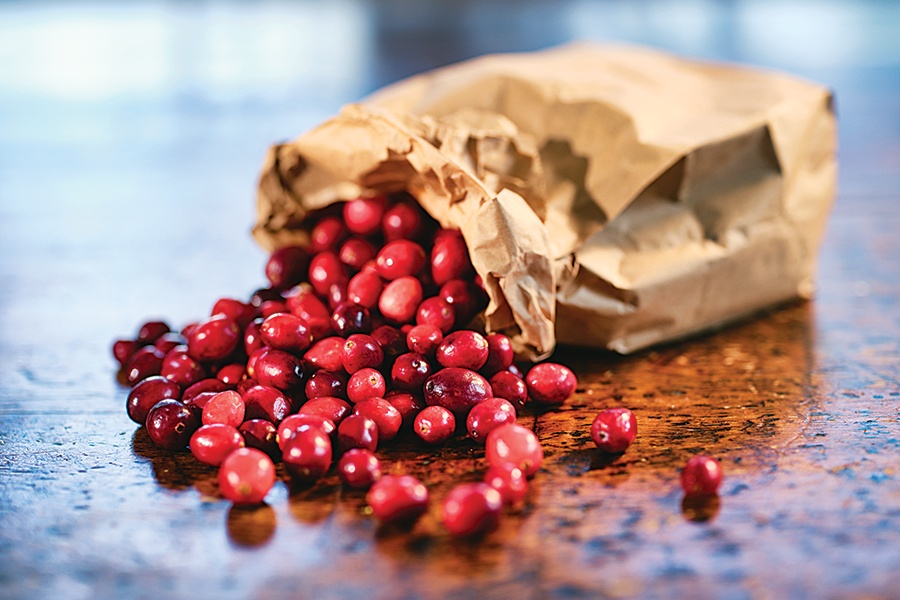 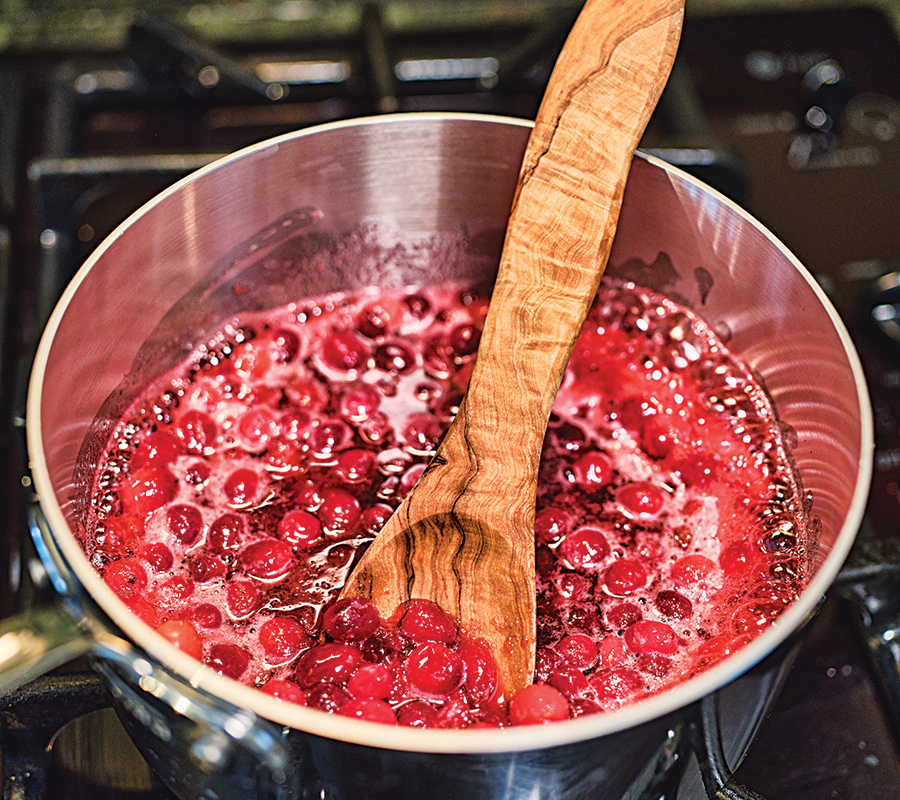 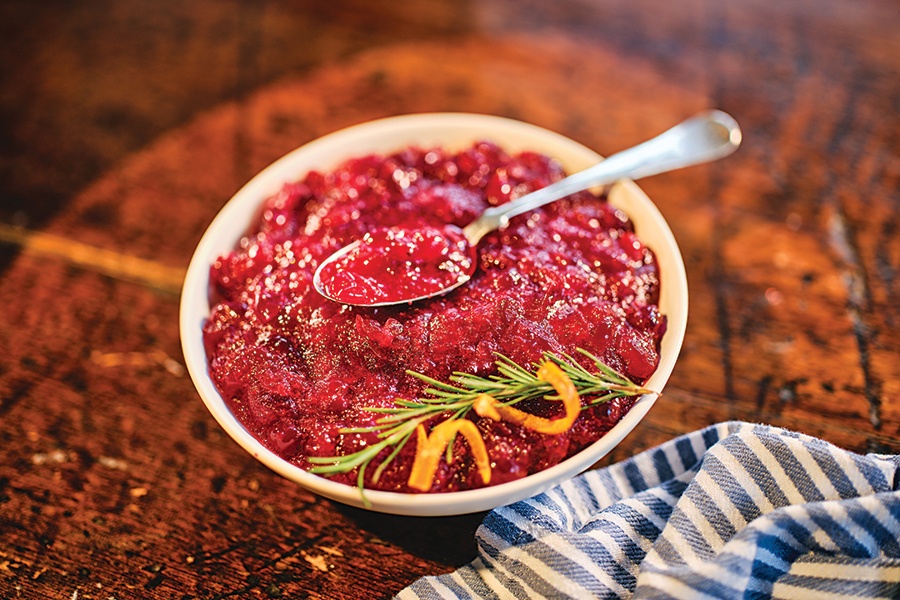 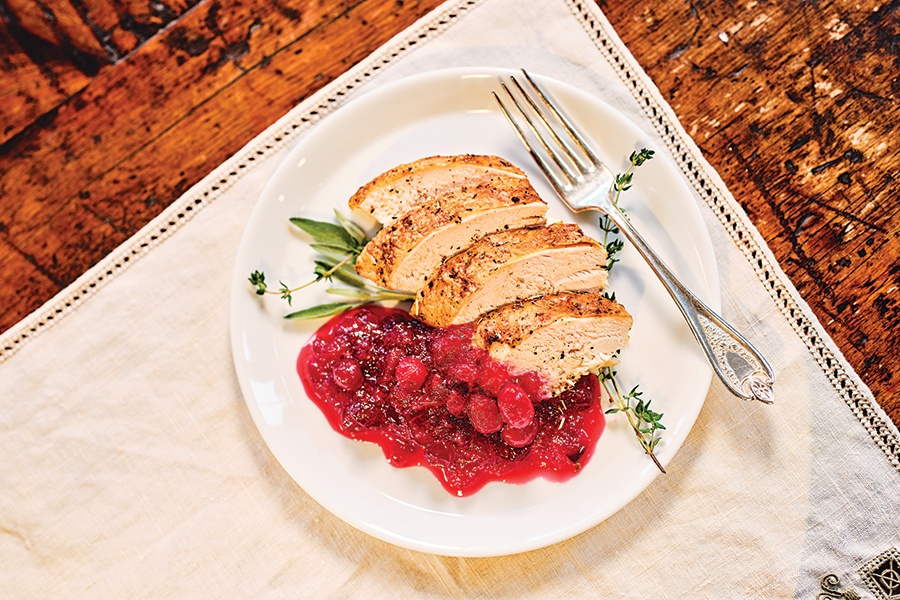 To make your own cranberry sauce at home, the folks at A.D. Makepeace’s market, Makepeace Farms, suggest one cup of water and one cup of sugar added to a 12-ounce bag of cranberries. Simmer for approximately 10 minutes or until the berries pop. To really wow your guests, add cinnamon, ground cloves, grated orange peel, or even a little Cointreau for the grownups.