New Apartments in The Fenway to Open Next Spring The Van Ness and Viridian mixed-use complexes on Upper Boylston Street celebrated their “topping off,” the ceremonial event where the last steel beam is hoisted to the top of a building while it’s under construction, festooned with an American flag—and, inexplicably, a Christmas tree, because…well, because.

The Van Ness development at 1325 Boylston Street will bring 172 apartments to the Fenway by spring 2015. The project is actually two buildings: one 10-story residential tower and a second seven-story mid-rise with 232,000 square feet of commercial office space rising over 170,000 square feet of retail and restaurants on the first three floors. City Target will be the anchor retail tenant.

Attending Wednesday’s topping off at the Van Ness were members of Samuels & Associates, the developer, including Chairman Steve Samuels and Executive Vice President Peter Sougarides, and Brian Golden, Acting Director of the Boston Redevelopment Authority.

“We are well on the way toward achieving the community’s original goal of creating a continuous pedestrian experience along Boylston Street,” said Samuels. “What is particularly exciting about this project is the addition of a more intimate experience along the previously empty Van Ness Street, which will include independent, local retailers operating on a smaller scale.”

Developers have been eager to brand this part of the Fenway as an “urban village,” a neighborhood that includes residential housing, hotels, restaurants, retail, and office space. Samuels & Associates is well on its way to achieving this all on its own. The developer has already built 776 apartments in The Fenway, along with 60,000 square feet of retail/restaurant space and a brand-new home for Fenway Health.

The Viridian project at 1282 Boylston Street includes 322 apartments and could open as early as April. In addition to the apartments, the $200 million mixed-use project will include 10,000-square feet of street-level retail/restaurant space, a community center for residents and neighbors, and an underground garage with space for 295 cars.

“The Viridian at 1282 Boylston is situated in the heart of the thriving Fenway neighborhood’s cultural, social and retail center and serves as a gateway to the residences in the Fens,” said David Epstein, President of the Abbey Group. “With its convenient location, access to the Longwood Medical Area, active social scene and many dining and entertainment options, the Fenway is quickly becoming one of the premier residential destinations in the city of Boston.”

The Abbey Group had previously considered an office building for the Viridian site, and, later, condominiums, but market conditions led it to finally go with apartments, beginning construction in August 2013. The developer is not new to the neighborhood; until recently it owned the Landmark Center, down the street. Abbey Group also developed the 45 Province luxury condo project in Downtown Crossing.

The speakers at the Van Ness topping off talked about the changes from when Boylston Street was a long, gritty stretch of pavement dotted with surface parking lots, fast food outlets, and gas stations. Its evolution began with the opening of the 536-unit Trilogy apartment complex on Brookline Avenue, and the 215-unit 1330 Boylston project soon thereafter.

Samuels & Associates is planning to begin construction this fall on another 300 units at The Point, at the corner of Boylston Street and Brookline Avenue, while Skanska has city approval for a 215-unit, 17-story residential tower at the corner of Boylston and Kilmarnock Streets. Eventually, Meredith Management’s Fenway Center will rise just a few blocks away, adding 350 new condominiums to the neighborhood. 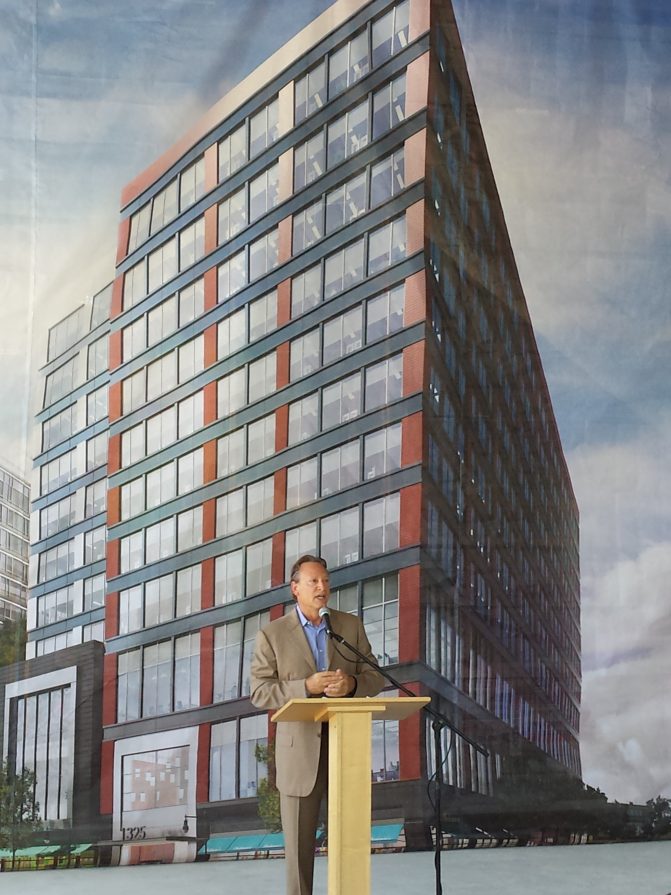 Steve Samuels, Chairman of Samuels & Associates, announces the topping off of the Van Ness apartments in The FenwayPhoto by John Keith 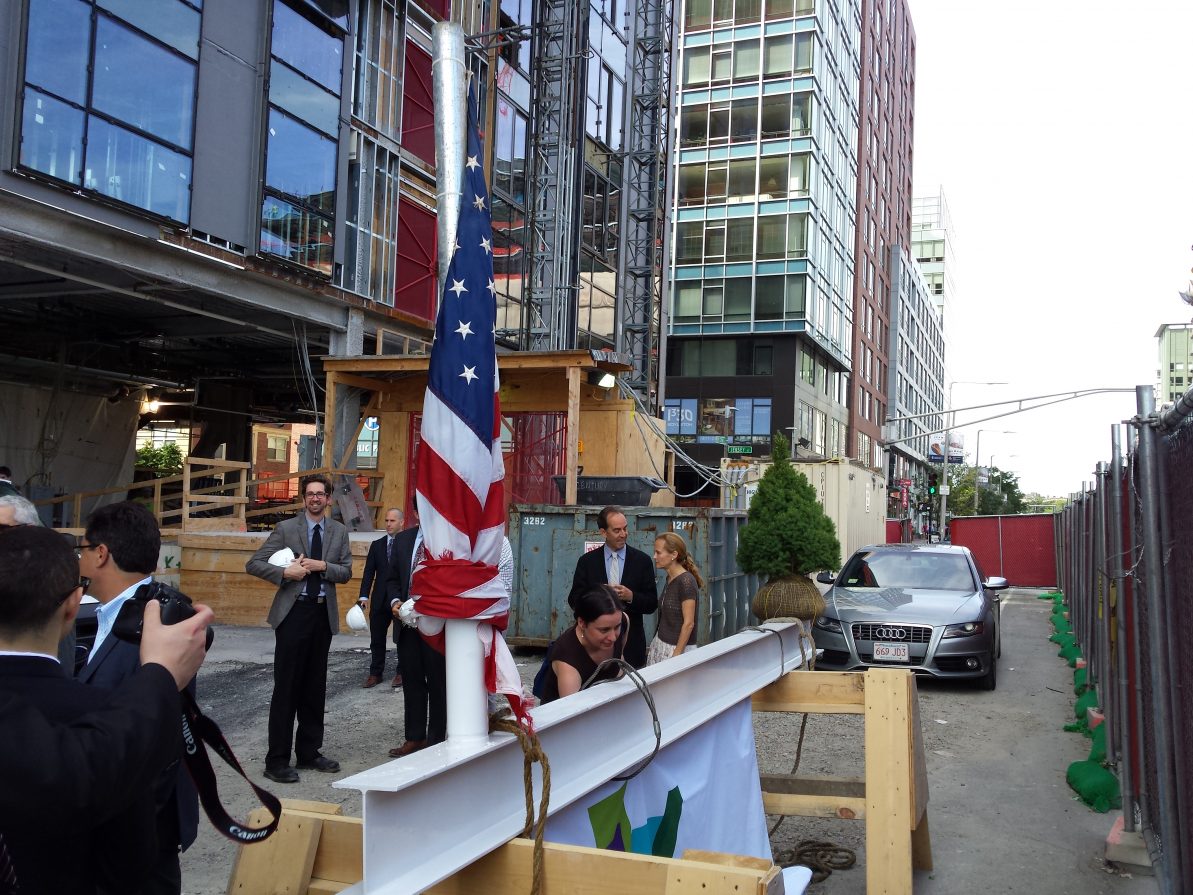 The last steel beam ready to go up on the Viridian apartment complex, due to open in the Fenway next SpringPhoto by John Keith 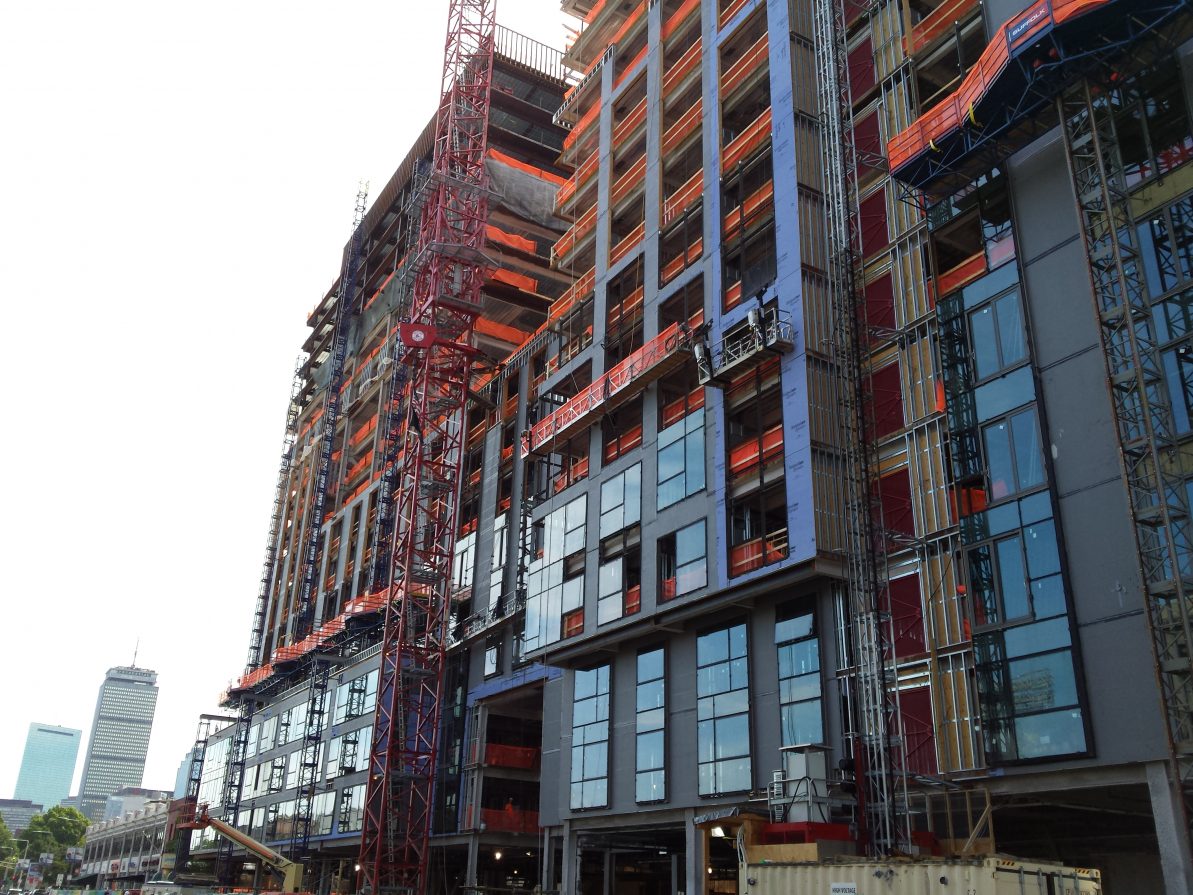 The Viridian apartment building in The Fenway, with the Prudential and John Hancock towers in the distancePhoto by John Keith 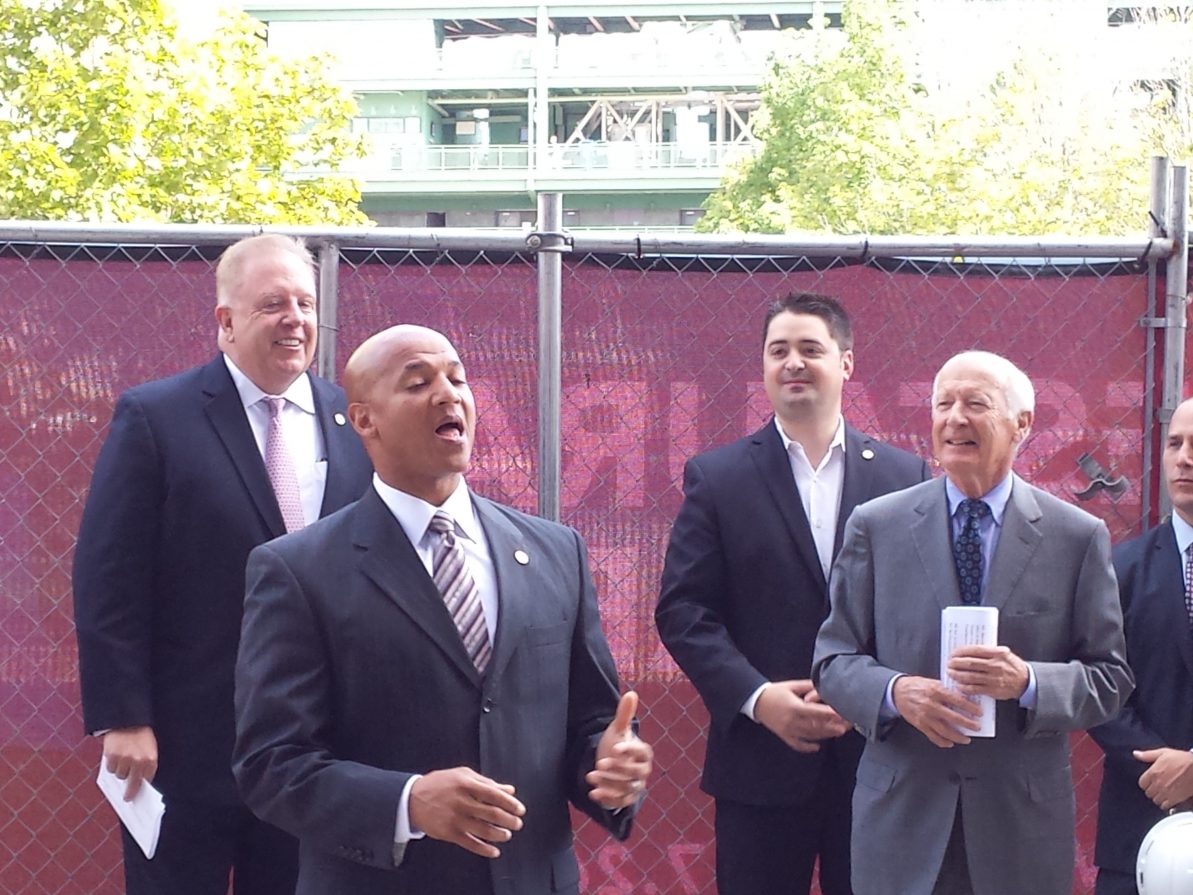 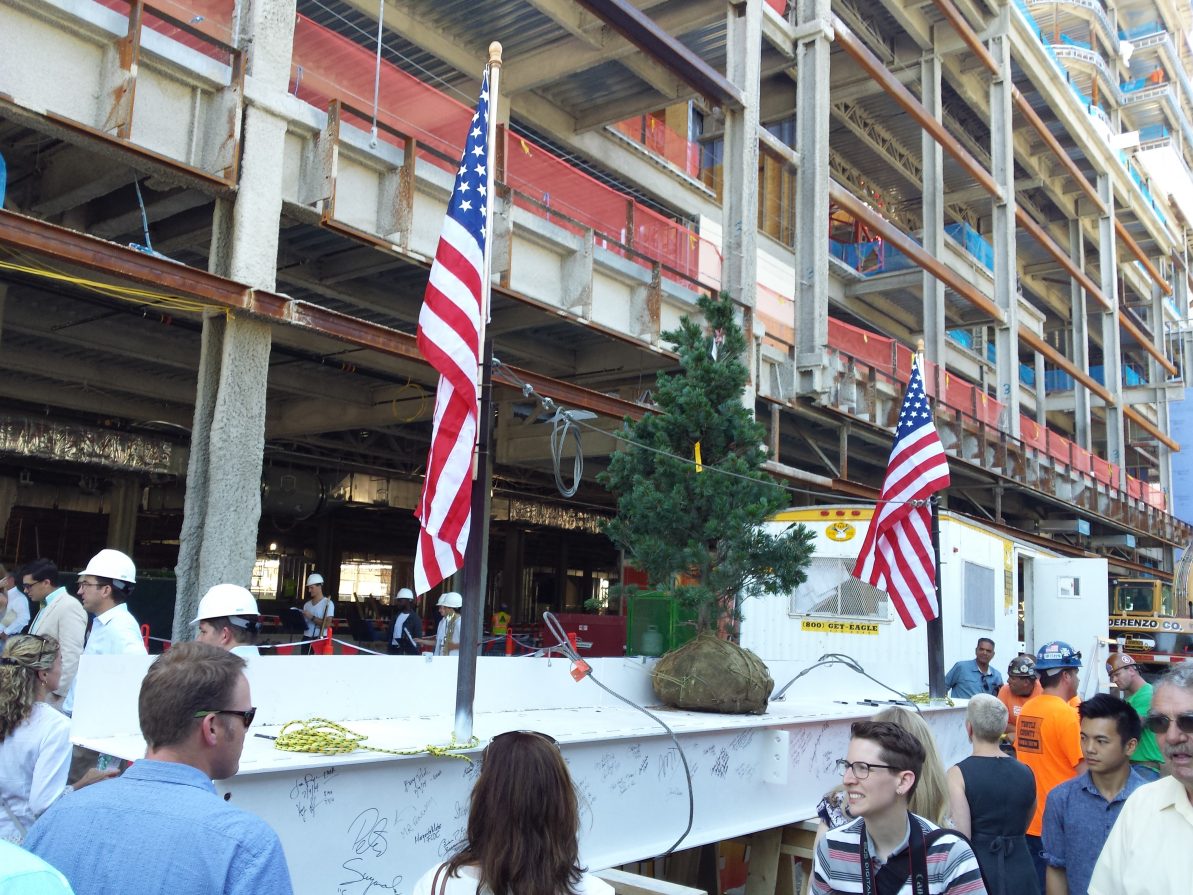 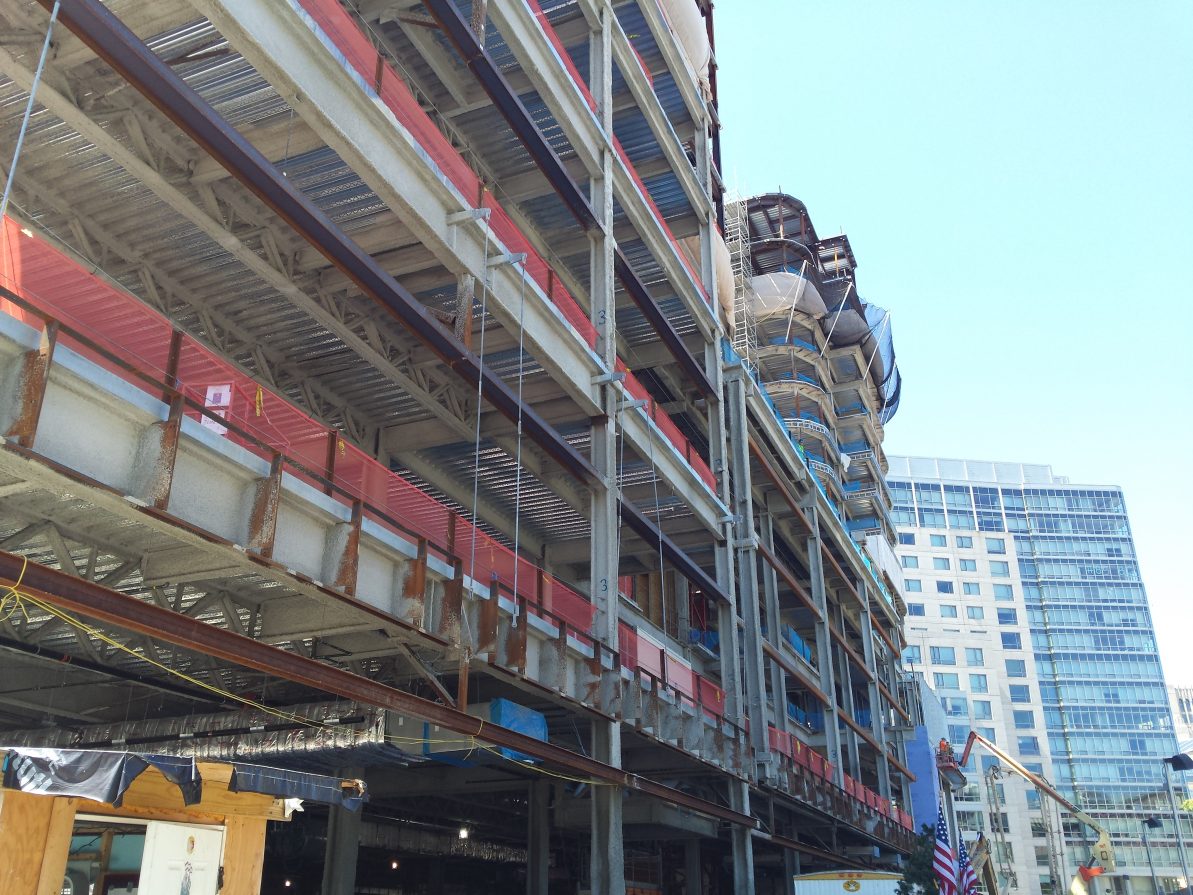