For Savannah and Henry Helgeson, the 4,100-square-foot penthouse on Commonwealth Avenue was ideally located—just a block from Newbury Street and within walking distance of the Public Garden and Esplanade. Occupying two floors with its own private elevator, the unit certainly was more manageable than their former five-story South End walkup.

That said, the home had its problems, including an awkward master suite and an outdated kitchen. Before renovating, the Helgesons lived in it for a year with the previous homeowner’s furnishings, which they’d bought along with the condo in 2012. By the time they enlisted the help of interior designer Nicole Hogarty, they knew what they wanted to do: open up the master suite, gut the kitchen, and make every inch within the unit functional.

Hogarty was immediately drawn to Savannah’s warm, inviting nature. “It’s an open-door policy with her,” Hogarty says. “She wants you to come in, to relax and have wine or coffee.” Unfortunately, with its overall lack of elegance, the Back Bay abode didn’t quite reflect her client’s generous spirit.

Hogarty set about creating a place designed for both entertaining and relaxing. She worked with Venegas and Company, Woodbourne Builders, and C & R Flooring to completely renovate the kitchen—installing tall Premier cabinets for additional storage, applying a custom stain to the existing oak floor to add warmth, and installing a wet bar that doubles as a breakfast bar. In the living room, Hogarty redesigned large window seats for the couple to enjoy with their dachshunds, Roscoe and Molly. Some of the couple’s artwork reminds them of their travels, like the map of Paris shown above, a reproduction from Restoration Hardware / Photograph by Michael J. Lee

In the master suite, Hogarty turned two tiny closets into one large one, and combined four awkward spaces into an open, spa-like bathroom, including a steam shower tall enough for Henry, his-and-hers Savoy sinks from Waterworks, and a large, squared-off tub. Hogarty also selected Waterworks “Basketweave” tiles for the floor and shower walls, made from Thassos and Carrara mables. The group worked with South End gallery Jules Place to add vibrant, eclectic pieces—like local artist Debby Krim’s floral photos and Karole Moe’s “Orange Wave” acrylic—to the Helgesons’ growing art collection. But it was the couple’s love of wine that drove the design of Hogarty’s pièce de résistance. The pair travels to Napa annually, and date night often includes bringing a sommelier into their home for educational tastings. “We even kept a journal for a while,” says Savannah. So to store their collection, Hogarty commissioned a sculptural, floor-to-ceiling wine cellar that could accommodate a few hundred bottles. It’s the first thing you see when you step off the elevator into the home, and has become quite a conversation piece.

Hogarty says that in addition to the wine cellar, it’s details like the antiqued-glass backsplash behind the kitchen’s wet bar and the oversize A. Rudin custom sectional (with added length and lumbar support for Henry), done in velvet with silk paisley pillows, that look great every day, and amp up the elegance in the evening.

“Generations ago there was this formal living room that no one touched, but nothing is off limits here,” Hogarty says. “Their living room can take you from two to 20 people easily. They can relax in there on a Monday night with a glass of wine but be just as comfortable in there on Saturday night with company.” Clockwise from left: Ebony and marble inlays and original crown molding were left in tact to preserve part of the building’s historical character; Phillip Jeffries wallpaper in “Quartz” looks like stone veneer behind the custom floor-to-ceiling wine rack from Woodbourne Builders; in the dining room, Kravet leather-wrapped doors are decked out with polished-nickel studs from Nanz. / Photographs by Michael J. Lee From left: Hogarty installed a chevron Thassos-and-Carrara marble backsplash in the kitchen to up the glamour; The Helgesons curated much of their artwork, including this piece by Jenna Snyder Phillips. / Photographs by Michael J. Lee The master bath was completely gutted to create a spa-like retreat for the couple. / Photographs by Michael J. Lee The master bedroom is adorned with Zoffany grasscloth wallpaper and a Landry & Arcari handknotted rug. / Photograph by Michael J. Lee 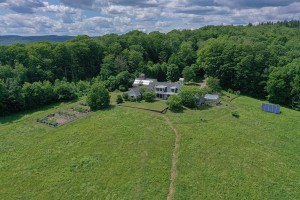