A Back Bay Brownstone with Glamour and Grace It’s a familiar tale: what once felt like a roomy apartment suddenly seems small when the kids hit their teens. In Howard and Sheila Galligan’s case, they found they’d outgrown their two-bedroom Beacon Street apartment. After a yearlong hunt, in 2010 the couple bought a 2,500-square-foot, two-story Commonwealth Avenue brownstone unit that was desperate for some love.

Which is exactly what Sheila Galligan, an interior designer, was looking for. “I wanted a place that I could completely renovate,” she says. “They’re few and far between. This home had been lived in for 27 years, so it was easily justified to gut it.”

Even better, the apartment had good bones: “I like the idea of living on one or two floors as opposed to very vertical living,” Galligan says. “The rooms are large, which is often difficult to find, and we liked it.” A year later, the family moved out for a thorough nine-month renovation overseen by M. F. Keane Contracting. A Hotel Python sconce by Carpyen, from Chimera, adorns the master bedroom. / Photograph by Jared Kuzia The master bath, featuring a tub from Wetstyle and tiles from Ann Sacks, boasts city views. / Photograph by Jared Kuzia

The Galligans had plenty of priorities, but their top one was the master suite. Its bathroom—once “long and narrow, like a bowling alley,” Galligan says—was widened, brightened with skylights that open and close, and outfitted with a tub from Montreal’s Wetstyle. Antique mahogany doors from the butler’s pantry were retrofitted for a spacious walk-in closet.

The bedroom also came with an underused front-facing deck accessed by narrow stairs. To make the deck feel more inviting, Galligan removed the inoperable windows and replaced them with NanaWalls—large glazed doors that fold into each other—to create unobstructed access when open. M. F. Keane raised the bedroom floor a few inches to bring it closer to the Brazilian walnut deck. Now the family sits there on summer nights and projects movies while enjoying the skyline views.

The home’s main staircase also needed a facelift, so M. F. Keane re-angled the steps, added a railing and a new skylight, and matched the oak treads and risers to the original flooring. Because the kitchen faces an alley, its bay windows needed drapery for privacy, but Galligan wanted natural light to come in as well. She opted for textured sheers from Christopher Robert at Lawrence’s Architexture workroom. The Lindsey Adelman Studio chandelier above the white-oak table supplements the sunlight.

The family usually hosts guests in their combination living/dining room, and this is where Galligan’s design sensibilities really dazzle: Opposing fireplaces are painted matte black; the silk-velvet bronze banquette was designed by Galligan and fabricated by McLaughlin Upholstering Company; vintage 1970s dandelion chandeliers made of 150 pieces of glass were found on 1stdibs. The family eats casual meals at a white-oak table from Lekker Home beneath a chandelier from Lindsey Adelman Studio in New York City. / Photograph by Jared Kuzia Galligan enjoyed contrasting old and new with her selection of art and furnishings, which includes a graffiti painting by street artist Stikki Peaches, found at a Montreal gallery; a photo montage of Venice by Tom Chambers, from the Chase Young Gallery; and a Belgian brass rubbing unearthed at an Essex antiques store years ago. Curved-back chairs from the 1950s encircle a Glas Italia “Post Modern” table, from Montage. Robert’s Architexture workroom fabricated alpaca drapes in midnight moss, deep enough to look black, matching a Moroccan black-and-white silk shag and herringbone hide-on-hair rugs, both by Steven King Decorative Carpets. In the wrong hands, so much darkness could look dim and drab. Galligan was careful to keep the mood bright.

“I love the plush look and feel of the dark silk shag—but I was also concerned that an entire room of it would weigh down the space. So I layered it with a few hair-on-hide rugs that are lighter in color and weight,” she says. A 1950s bar cabinet by Luisa and Ico Parisi for MIM. / Photograph by Jared Kuzia Galligan poses on her deck, a family gathering spot adjacent to the master bedroom. / Photograph by Jared Kuzia

White walls also keep the look clean and contemporary, Galligan says. On the new roof of this 19th-century brownstone? Solar panels, of course.

The result? A contemporary, open, eclectic space that mixes 21st-century niceties with vintage touches, right in the heart of the city. “The bones of our house are very traditional, but I love that it’s also so contemporary and usable,” Galligan says. 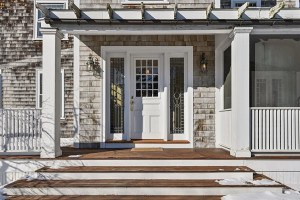 On the Market: A Shingle-Style Home in Manchester-by-the-Sea