The former flower shop has been torn down. The glass greenhouse that’s stood beside Faneuil Hall for years has officially been torn down.

Now, management company Ashkenazy Acquisition Corp. will clear the area for a new retail pavilion, according to a report by Banker & Tradesman.

The Faneuil Hall Flower Market opened at the spot in 1936. Then, in 1976, the greenhouse was built to replace the market. Banker & Tradesmen notes that the last permanent tenant of the glass structure was a shop called Exotic Flowers. The business shuttered in 2009.

Ashkenazy has said it seeks to make Faneuil Hall a year-round destination. Last year, the greenhouse didn’t meet code requirements to be used during winter.

While there have been several proposals for the site—including a Sephora—there has been no official announcement regarding a new tenant. The Boston Globe chronicled the battle over Faneuil Hall’s future in June 2015 after the Boston Landmarks Commission delayed the demolition of the greenhouse for 90 days, as well as denied plans for two new glass structures near Quincy Market.

Last July, the Boston Redevelopment Authority approved a master plan to completely overhaul Faneuil Hall, though each piece of the plan must be approved separately by the Landmarks Commission because of the historic nature of the property. A Faneuil Hall florist in the mid-1900s. / PHOTOGRAPH BY LESLIE JONES VIA THE BOSTON PUBLIC LIBRARY 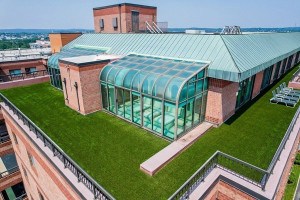