The Art of the Window Box

How to sustain a tiny, eye-catching garden. When the community garden plot raffle seems hopeless and you have no posh roof deck to house a container garden, window boxes offer a pleasant sliver of cathartic gardening.

Window boxes are much older than urban container gardening trends—they date back to Ancient Rome. First mentions of the tiny plant vessels can be traced to Pliny’s Naturalis Historia:

The urban poor used to have window-boxes, which gave them a glimpse of the countryside every day, but now the countless violent burglaries have forced them to shutter their windows.

Kerry Preston founded her land care company Wisteria & Rose in 2001 by offering window box services. She’s since expanded to garden design and irrigation management, but has offered up her window box expertise for the novice gardeners out there.

Know your light requirements. The amount of sunlight your window receives is crucial in figuring out which plants will grow best there.

First, identify which side of the street your window occupies and go from there.

Then choose a color palette and start with one plant. When it comes to design, it’s easy to feel overwhelmed with options. Preston says to first choose a color for the box’s theme, and then one plant to anchor the box.

Plan long term. The window box should last as long as possible, explains Preston. That means choosing a mixture of tightly packed plants that fare well in different temperatures.

“I’ll use an example—if we’re planting our box now, it should last all summer. I know a verbena doesn’t really like it in the summer because it’s too hot. But it looks fantastic right now, so I’ll plant that next to a begonia. (Begonias) aren’t that big right now, but once that verbena shrinks back because it’s too hot, I’ll cut that and then the begonia takes over,” says Preston.

“I try to think ‘What does it look like today and it what is it going to look like two months from now?'” she says. “The key is to pruning out things.”

Think outside the box (get it?) Verbenas and begonias aside, window boxes can be home to much more than just pretty petals.

“We do far more than flowers. As a matter of fact, I’d say I do more non-flowering plants than flowering plants because foliage is so colorful,” says Preston. “You can have the brightest window box and not have a flower in it at all.” But plant nothing edible if you live in the city. Strawberries and herbs are creative additions to window boxes, but they won’t fare well for city dwellers.

“There’s a lot of creatures that roam the city streets, so we try not to put food out for them,” says Preston. “But any suburban house could have window boxes with beautiful sugar snap peas growing in them and growing up the vines in your shutters. It would be just beautiful.”

You still have to water your window box when it rains. Unlike with most gardens, a rainy day isn’t a free ticket to get out of watering.

“A lot of the time, people think that rain will water their window boxes, but it really doesn’t because you’ve got so many overhanging things,” says Preston. “And that’s with any house.”

Get on a regular water schedule. Consistency is important when watering, especially because it’s hard to bring a window box back to life after it’s been dehydrated. Fertilizer helps, too.

“Every time you water, all of the nutrients are kind of being drained out of the soil,” says Preston. “As the plants get bigger during the season, you need to fertilize them so they can continue to grow.”

If you’ve carefully selected your plants and paid mind to the many window box tips, how can you know if you’ve done it right?

If you like it, then it’s successful, says Preston.

She explains, “Even if it’s only got two plants in it, but it really makes you happy, then it’s a good window box.” 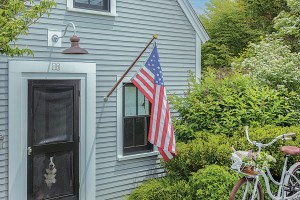 Shelter From the Storm

Palettes: Cool by the Pool