Fired Up: Fiamma Glass in Waltham 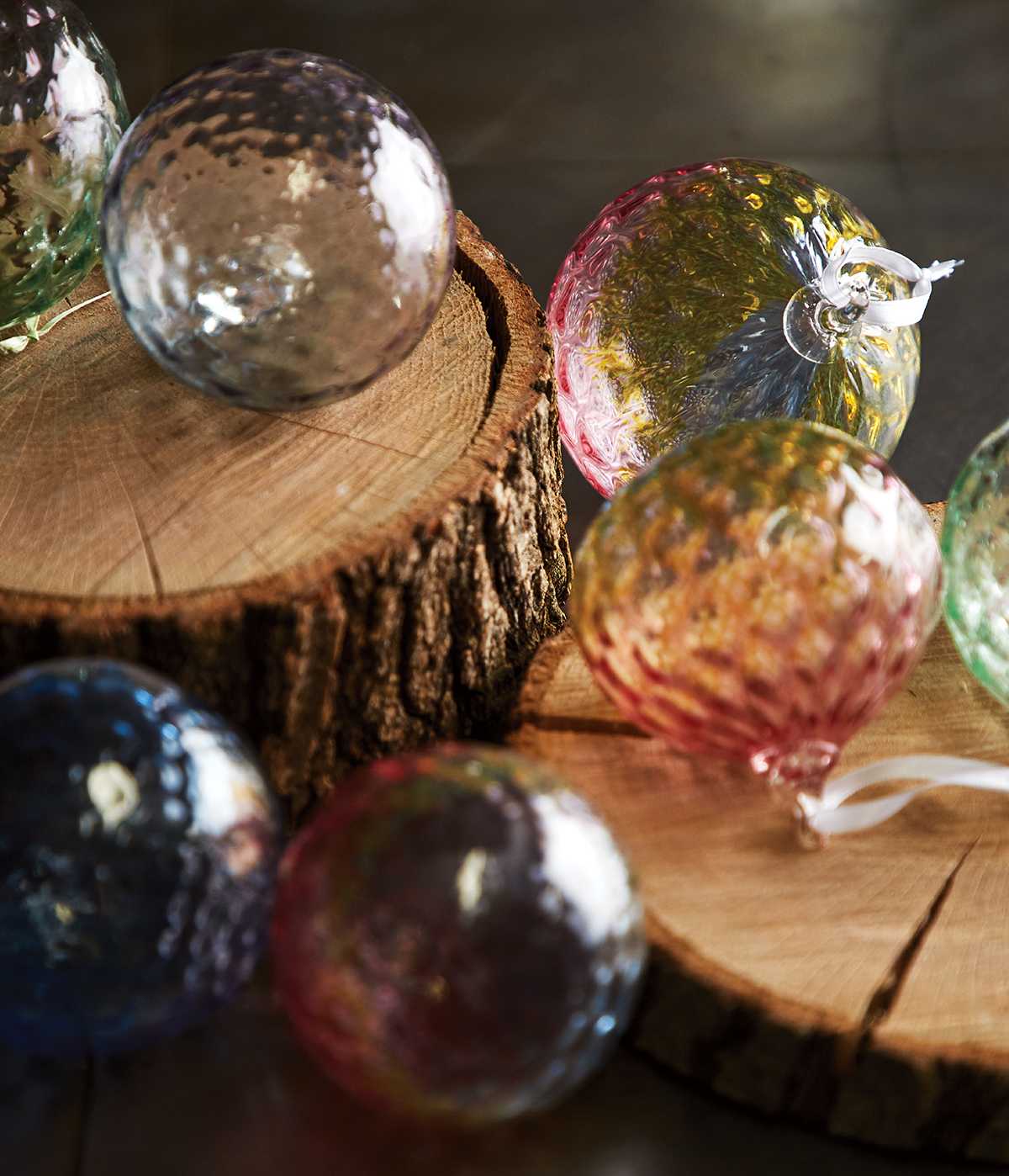 Dave Weintraub’s bare hands inch dangerously close to the bright flame of his torch as he continuously spins a slender rod of borosilicate glass in the heat, skillfully shaping and working the molten material. It doesn’t look like much now but, in less than 10 minutes, the rod will become a fully formed fish ornament. “Glass is a great insulator of heat, but a terrible conductor,” Dave explains from his workbench at Fiamma Glass, the Waltham studio he co-owns with his wife, Trina. “I can hold [the end of the rod] right here and, even though it’s well over a thousand degrees, feel absolutely none of the heat.”

The properties of this fascinating medium—brittle when cool, elastic when hot—are second nature to the Weintraubs, who trained together at MassArt before opening their aptly named studio (fiamma is Italian for “flame”) in 2011. With more than 30 years of glassworking experience between them, they’ve mastered several techniques, from torch-based practices such as flame working and fusing to more-traditional methods such as furnace blowing and kiln casting. They use their expertise to fashion one-of-a-kind stemware, jewelry, vessels, and more, which they sell on Etsy and in such boutiques as Newton’s Limited Editions. 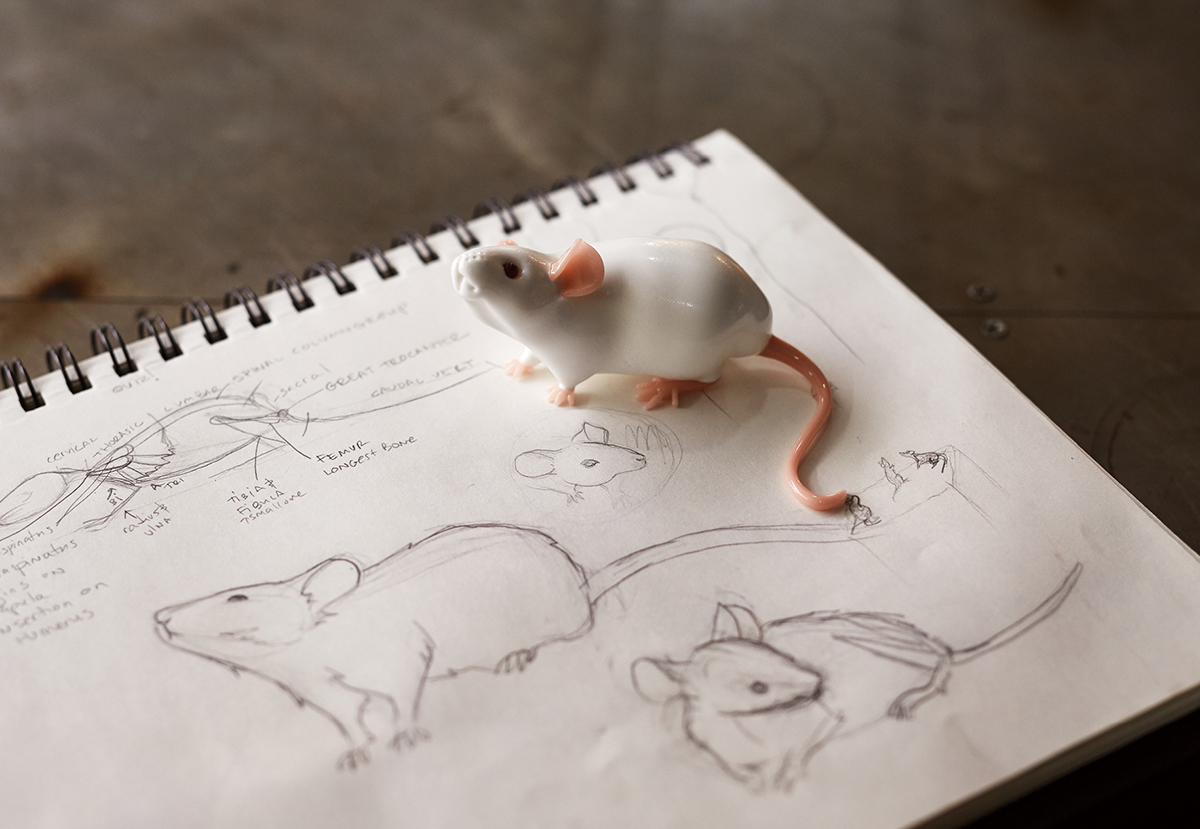 A glass mouse, created by Trina, rests on top of the artist’s sketches. / Photograph by Pat Piasecki 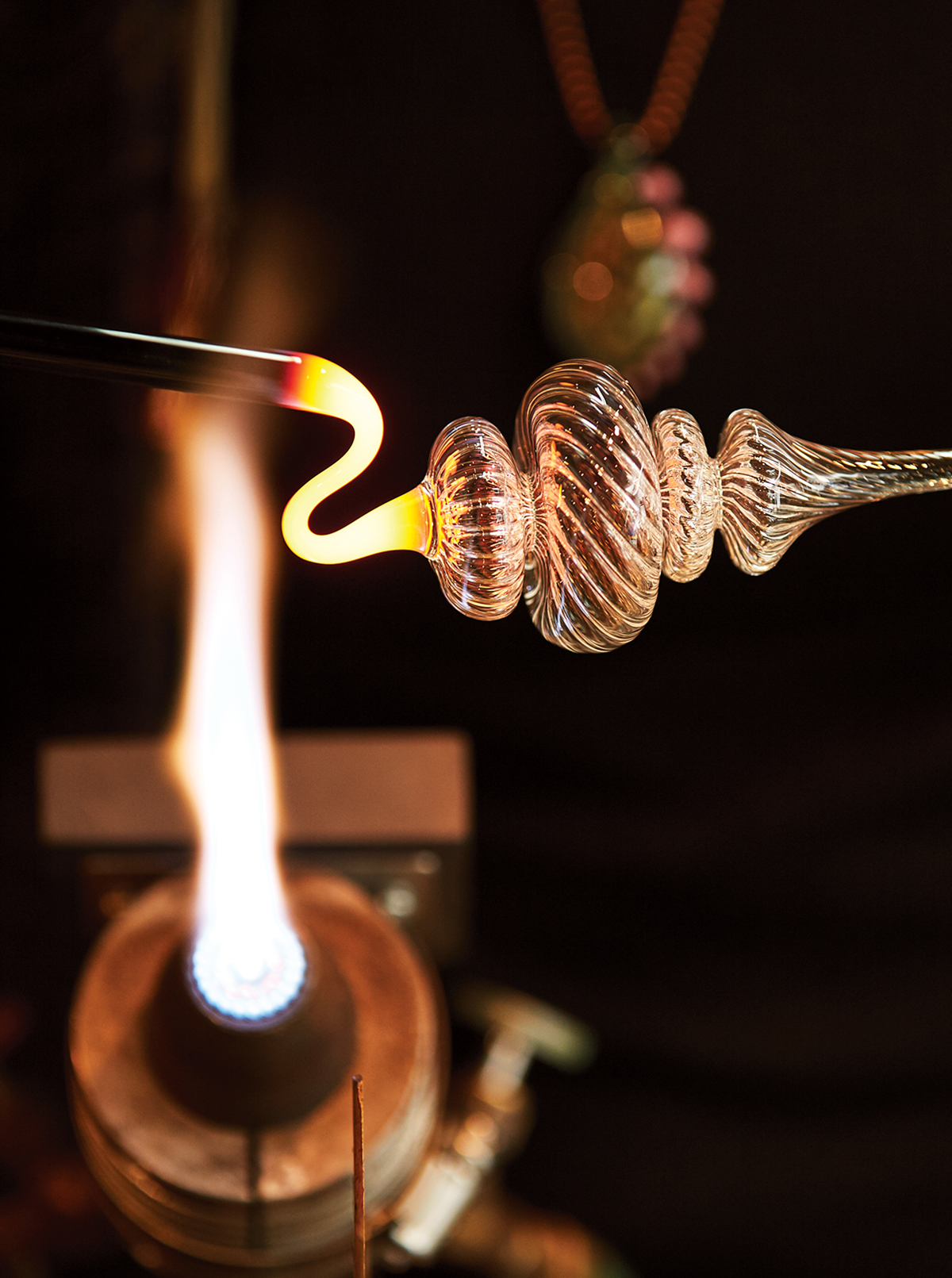 Flame working is the Weintraubs’ method of choice for more-detailed pieces, like this ribbed ornament. / Photograph by Pat Piasecki

Dating to ancient times, glass art is, at its core, an exercise in trial and error—a craft that demands a certain tolerance for “blood, sweat, and tears,” Trina says. “It’s a medium that fails rather spectacularly,” Dave adds. “There’s no other art form where if you zig instead of zag, everything just crashes or things catch on fire. You learn to fail with a little bit of grace.”

Perhaps, but there are few signs of failure in the Weintraubs’ Maple Street workshop. The space teems with finished pieces, from the life-size deer sculptures that Trina recently showcased at an art fair in Chicago to the tequila-ready shot glasses that Dave custom-made for Tempo, a popular bistro and cocktail bar just a few blocks away. Commissions from designers, architects, and local organizations account for half or more of their total business. One of their latest orders? An installation for MIT’s student center. The Weintraubs fashioned elements for the small sculpture—which depicts two life-size hands holding a bowl—using three different glass-shaping techniques: flame working, casting, and furnace blowing. “That’s fairly unusual. Most people specialize in one of the three,” Dave says. “We take a lot of the jobs that other people can’t because they’re too complicated or technical.” 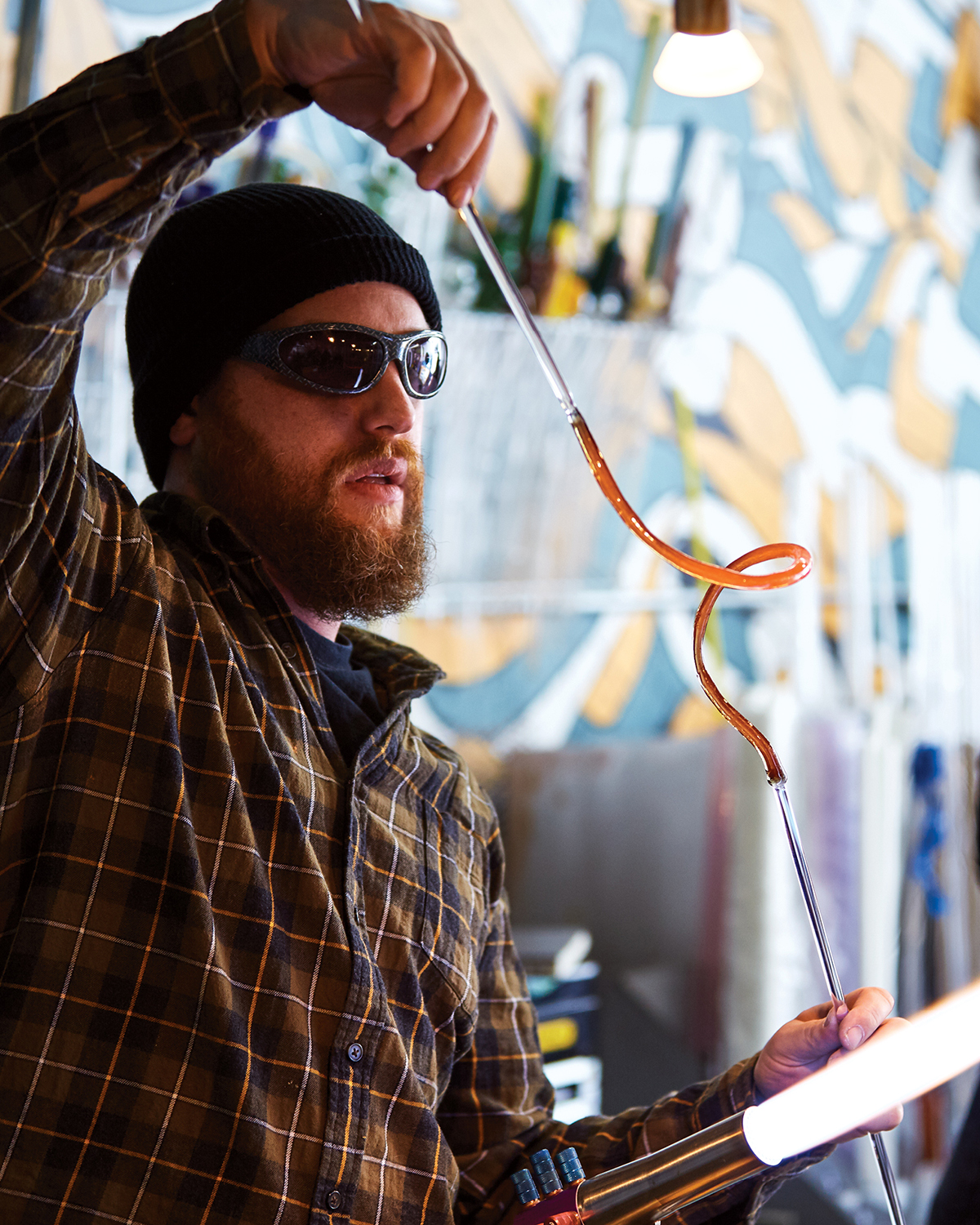 Dave relies on heat and gravity to form a delicate flower stem. / Photograph by Pat Piasecki 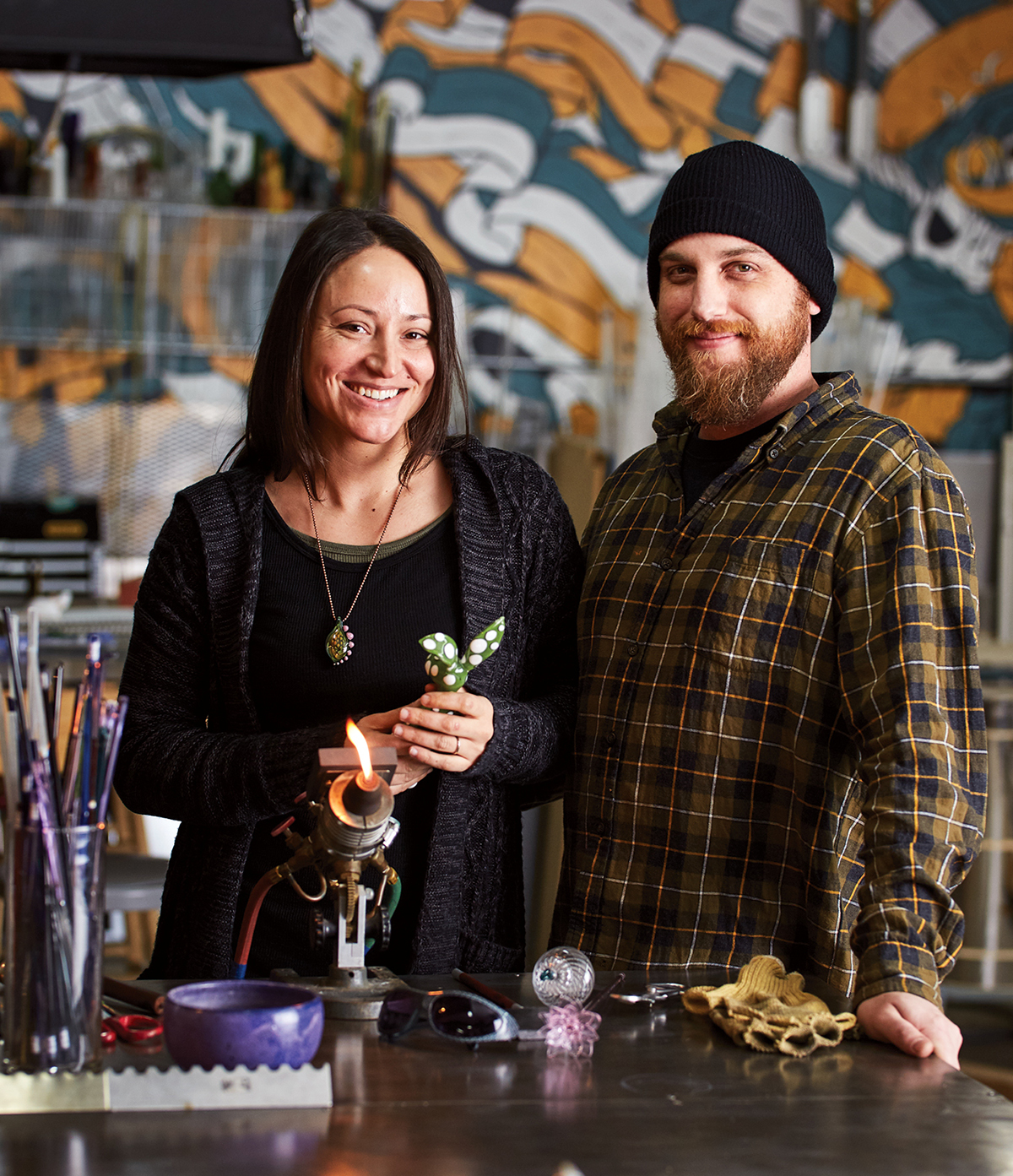 Trina and Dave in their Waltham studio. / Photograph by Pat Piasecki

In addition to tackling complex commissions, the couple rounds out their business by offering weekly classes in flame working and fusing at their studio. During the multihour sessions, students learn to make beads, pendants, and other decorative objects while gaining basic proficiency in manipulating hot glass and working with color. The Weintraubs discovered their mutual love of teaching while studying at MassArt, where they often served as assistants for various classes. Now an adjunct professor at the college, Trina says she learns as much from teaching as she does from experimenting on her own. “I get home from my classes and I’m buzzing,” she says. “The students’ energy feeds you. It’s amazing.”

The artists cite other sources of inspiration, too. Avid hikers, they both pull heavily from nature while creating their personal artworks: Dave is drawn to insect and floral pieces, while Trina enjoys depicting animals. Still, Trina says, their greatest muse may be the glass itself. “It has so much soul. It definitely tests you,” she says. “You think you know glass, and then you get a new project. There’s always something to learn.” 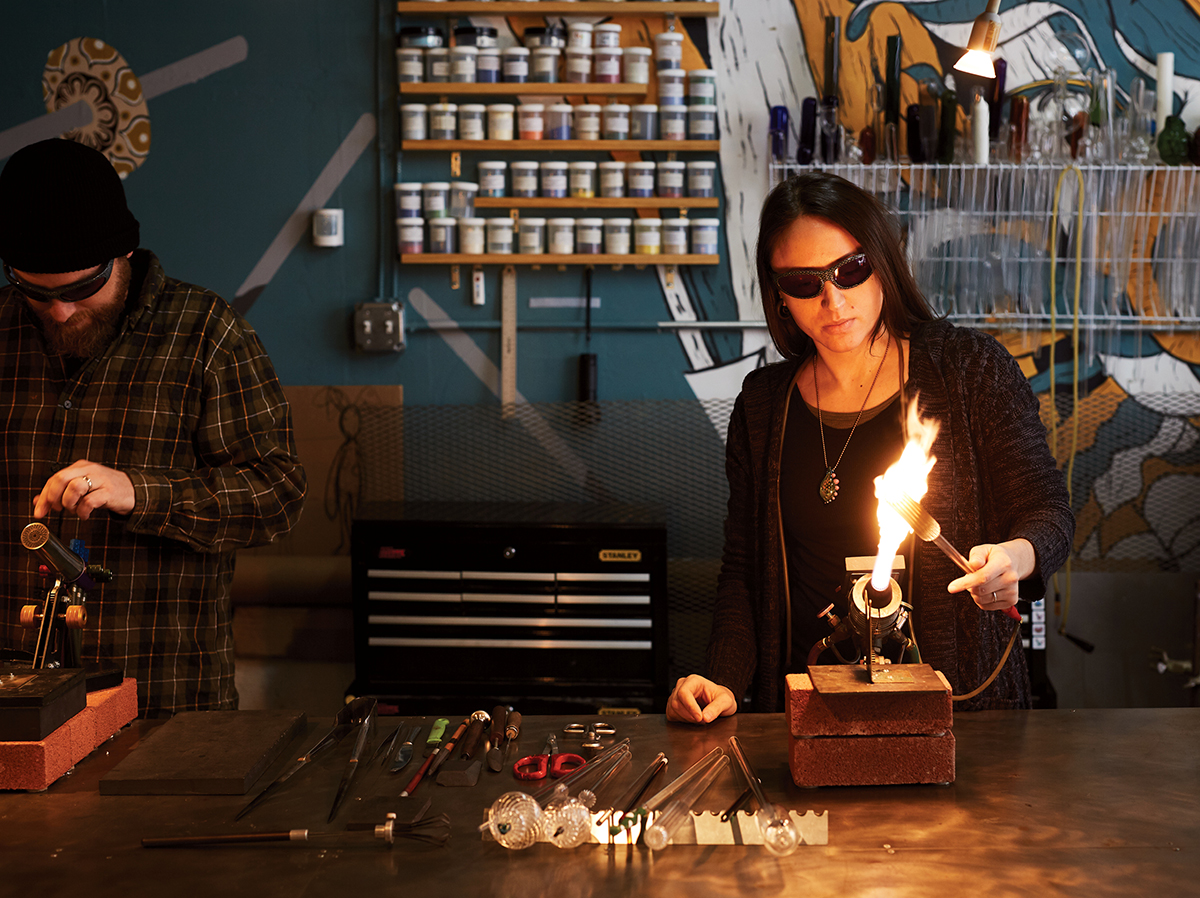 “We call it ‘getting the glass bug,’” Trina says of the couple’s attraction to the art form. / Photograph by Pat Piasecki 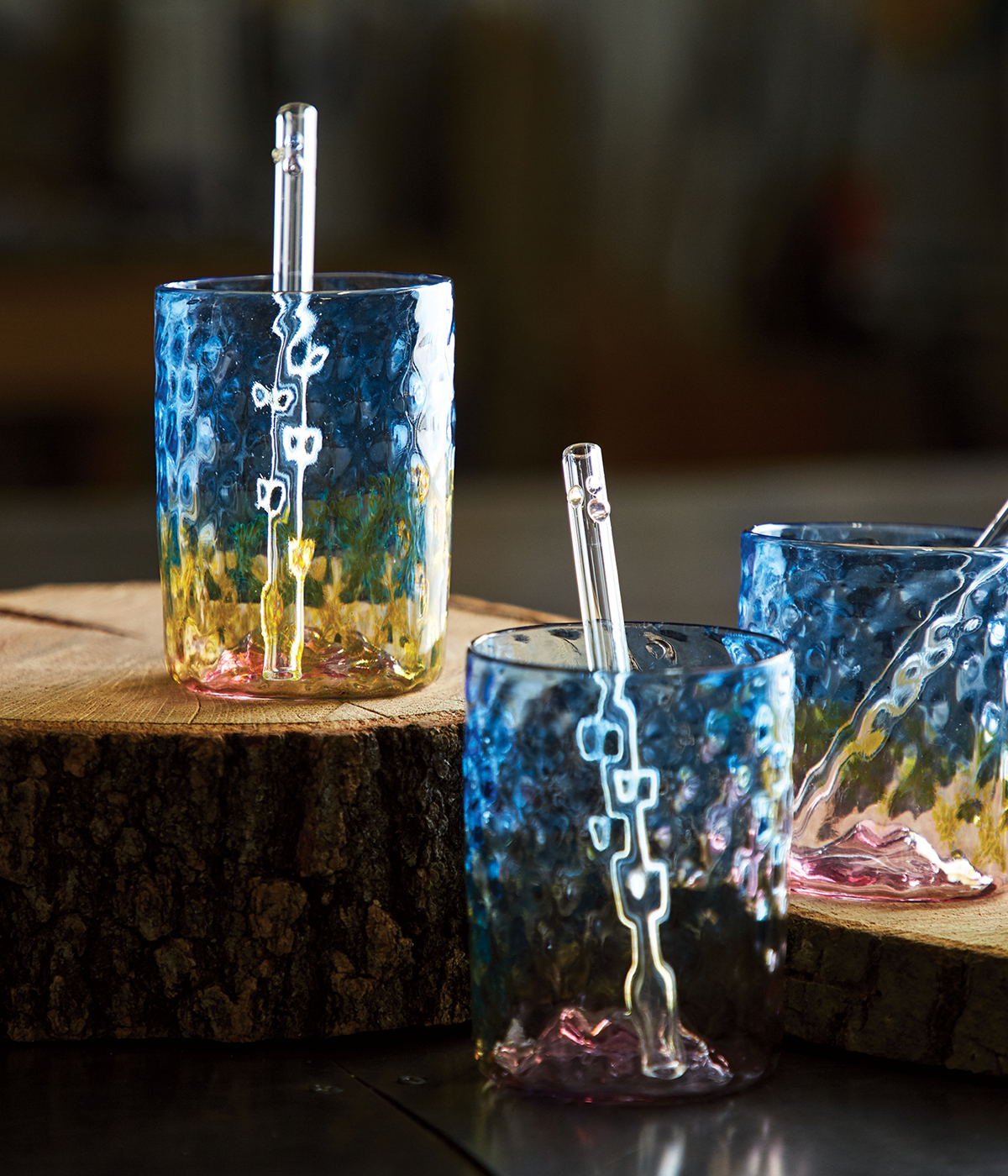 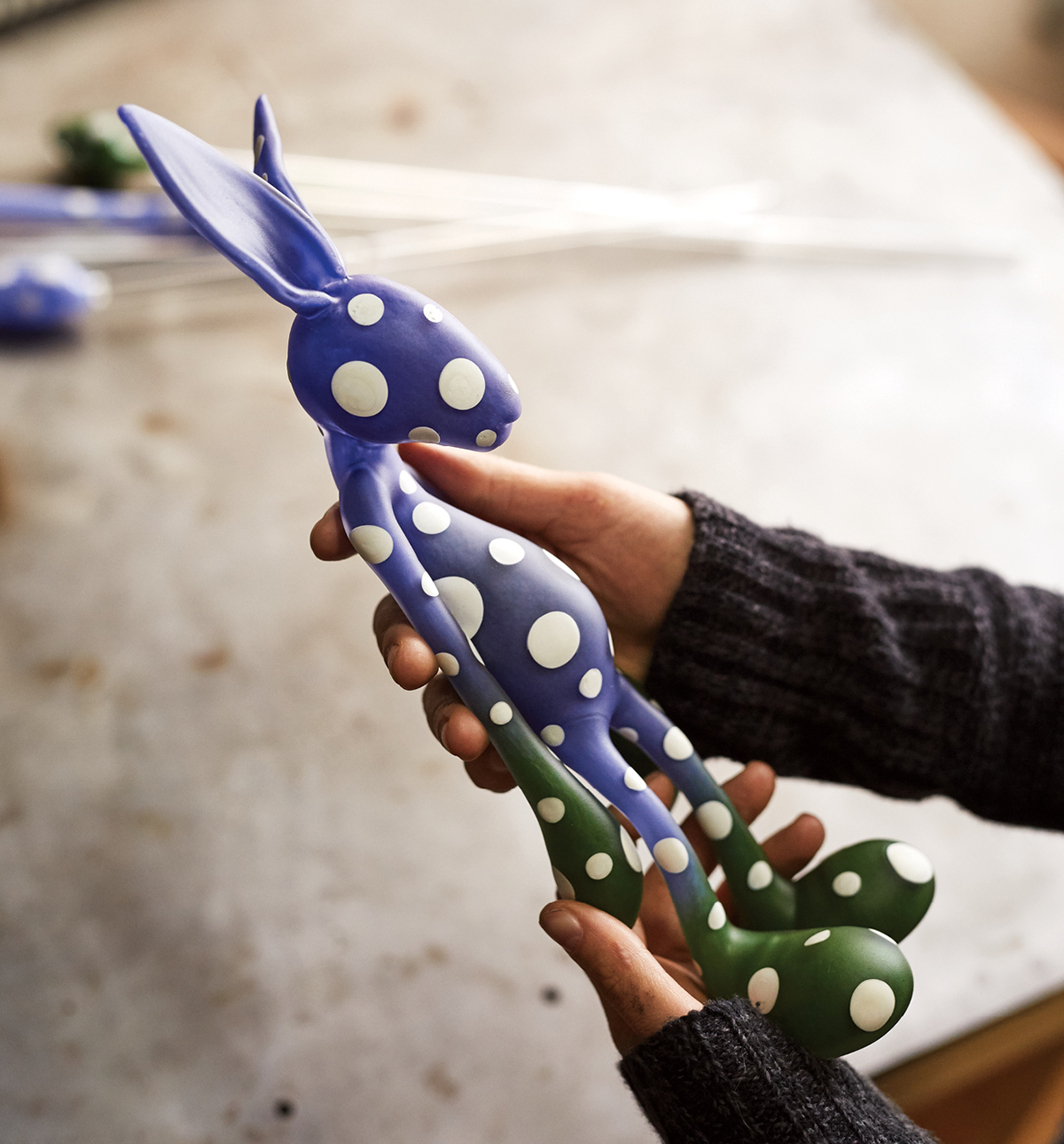 Trina made this rabbit by assembling pieces of blown-and-sculpted hollow glass. / Photograph by Pat Piasecki 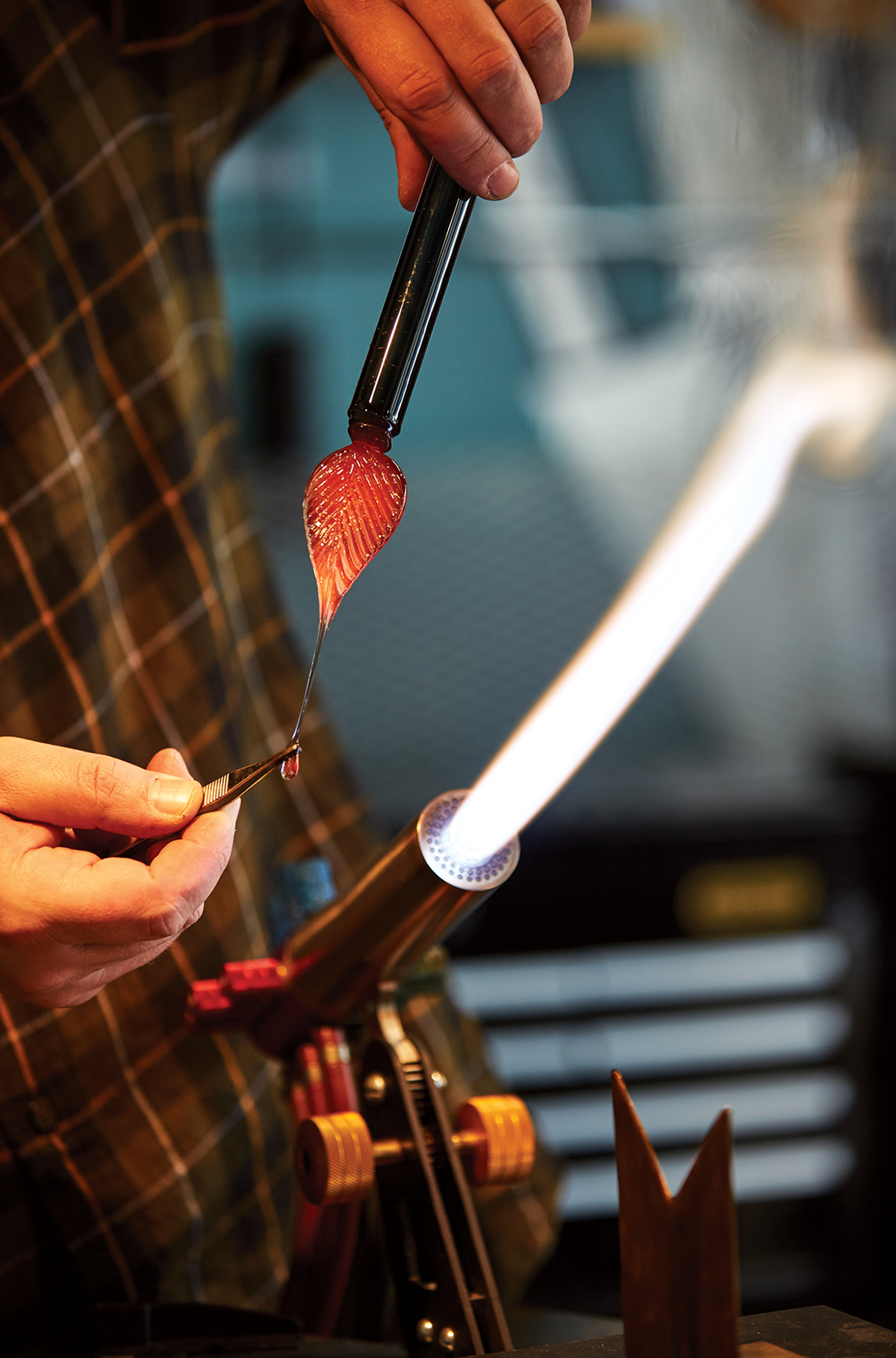